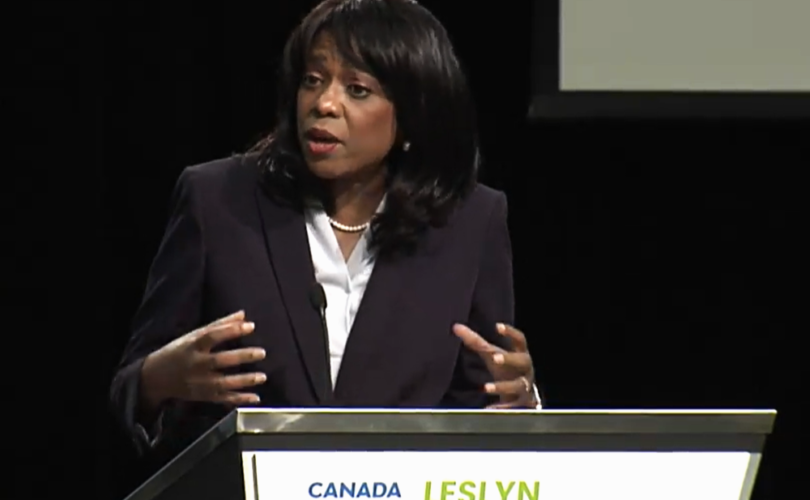 OTTAWA (LifeSiteNews) – Five verified candidates vying to lead the Conservative Party of Canada (CPC) faced off in their first debate last night in Ottawa and the lone pro-life candidate spoke strongly in favor of life, family and freedom.

MP Leslyn Lewis wasted no time making her opinions clear in her opening address at the debate, which was held Thursday evening at the Shaw Conference Centre in Ottawa.

“The fabric of our nation is being torn apart by cancel culture and wokeism,” Lewis said.

“National unity is at an all-time low. Many people are traumatized by COVID lockdowns and government mandates. I am running to be a bridge-builder.”

Lewis added, “We will develop our natural resources while protecting the environment. We will respect freedoms and uphold our charter of rights. I am running to make Canada the freest and most prosperous country in the world.”

The debate was moderated by Candice Malcolm, founder and editor-in-chief of True North, a conservative independent media outlet. The questions posed to candidates were not known in advance.

It also served as the kickoff for the annual Canada Strong and Free Network, which is taking place May 5-7 at the Shaw Conference Centre.

Charest, in his opening address, claimed that throughout his career he has “fought” for Canada, saying, “We cannot take out country for granted,” adding that he is the answer to taking down “Trudeau.”

Poilievre said that he was running to make Canadians “free,” including “free to choose your own medical decisions, free from vaccine mandates imposed on you by the state.”

Poilievre, who is an MP for the riding of Ottawa Carlton, added that his goal is to let Canadians take back control from “big bossy government.”

He also claimed that he can rally Canadians to the CPC, who would “never” have voted for the party and promised if elected he would “defund the CBC.”

Aitchison said that fiscal responsibility is important as well as “free speech” and freedom of the “press.”

Baber said, “I don’t even like politics, but I love my country, and I love Canadians, and I’m not going to sit back and watch the erosion of Canada’s democracy and opportunity.”

He added that the CPC lost the elections because conservatives played “the game” of the Liberal media, and that the CPC did not stand up for regular Canadians in the last election.

Lewis said that “families are the cornerstone of our society, and parents should have a right to raise their children in accordance with their values.”

She added that Canadians’ “fundamental freedoms” are essential to being free and that governments must never again impose “the Emergencies Act.”

She also said that Canada needs to oppose Digital IDs and currency, and should also fight the World Health Organization’s (WHO) pandemic treaty.

During the debate, Lewis was asked about her strong pro-life stance by Malcolm and she said it is important that Canadians are “free to debate any issue.”

“And I tell people I am pro-life, many of my friends are pro-choice, and we have healthy discussions about the future, and there is so much that we agree on,” Lewis said.

“We need to come together as a society to determine that we can work out things, even controversial things like abortion. I still don’t know where these gentlemen stand on this issue. I don’t know whether they’re pro-life or pro-choice, and the media will hound them.”

Lewis then claimed Poilievre has been “running away” from the media in the last few days to avoid giving his firm stance on whether or not he is pro-life or for abortion, adding, “he doesn’t want to declare where he stands. Is he pro-choice or pro-life?”

“As a leader, he’s going to have to declare that he cannot just be a minister of finance if he wants to be a prime minister. He is going to have to deal with social conservative issues, which he has been running from for this entire campaign,” Lewis said.

Poilievre never answered during the debate where he stands on life issues.

Charest, rather interestingly and perhaps to gain favor among social conservatives despite his pro-abortion views, said to Lewis that he has a “deep respect for the position you hold on the issue of abortion.”

Charest then said those with a “faith-based” life who hold pro-life views will “always be a part of our family and they need to be respected.”

Baber said that “any single” one of the candidates would “make a better prime minister than Justin Trudeau.”

The CPC’s Leadership Election Organizing (LEOC) did not say why the pro-life candidates were disqualified, but only that they did not meet the correct entry rules.

Lewis on Monday voiced concern that some candidates were disqualified from running in the leadership race.

Baber’s views on abortion are not as clear, but he recently said he does not “believe government has a role in how people start or grow their families.”

On Tuesday, Aitchison released a video on Twitter stating clearly his support for abortion.

Charest, who is also a leadership candidate, reaffirmed recently on Twitter that he is “pro-choice.”

Poilievre blasts Charest as a ‘Liberal’ and just like Trudeau

During the debate, Poilievre wasted no time blasting Charest as a Liberal.

“Charest learned about the trucker convoy on the CBC like other Liberals and he misrepresented them. He believes I should be censored, canceled from this leadership,” Poilievre said.

“I don’t share his Liberal viewpoint. The truckers have more integrity in their pinky finger than you had in your entire scandal-plagued cabinet.”

Charest shot back at Poilievre’s claim that he is a Liberal.

“I stand as a record as a conservative all my life,” Charest responded.

He then pivoted to claim Poilievre and Lewis somehow supported an “illegal blockade” for showing support for the trucker Freedom Convoy.

This drew an immediate backlash from Lewis and Poilievre, as well as many jeers and boos from the audience.

During the debate, Lewis, who it should be noted has consistently spoken out against vaccine mandates for well over a year, blasted Poilievre for only carrying about freedoms when it suited his interests.

This was in response to a moderator question asking candidates to address criticisms that the CPC was silent against COVID lockdowns and mandates for much of the pandemic.

Poilievre claimed he did “stand up for freedom during the pandemic from the very beginning,” saying he was one of the “loudest voices in parliament.”

Lewis interrupted him to say this was “not true,” adding, “you were not one of the loudest voices, Mr. Poilievre.”

“In fact, you did not speak up until it was convenient for you to speak up,” she said, also accusing Poilievre of not going to visit the trucker protests but instead opting for just a photo opportunity in his neighborhood.

Poilievre claimed that this was not “true,” despite repeated interruptions from Lewis, saying he was “on the street.”

Baber, who was kicked out of the Ontario Progressive Conservative Party of Premier Doug Ford for speaking out against mandates, noted how the silence from the CPC in the early days of the pandemic in not speaking out against COVID mandates will hurt the party for “generations” to come.

Notably, overall, Baber came out strongest in the debate against blasting how COVID mandates and lockdowns stripped Canadians of their freedoms.

This debate will be moderated by True North senior journalist Andrew Lawton.