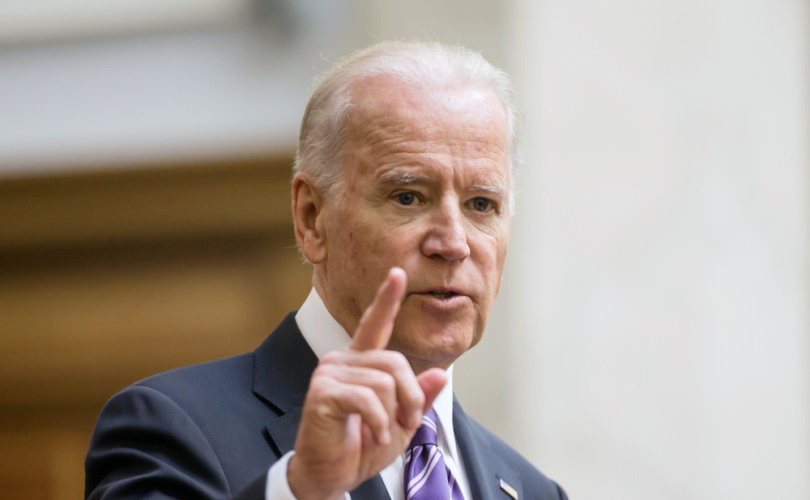 SOUTH BEND, Indiana, May 2, 2016 (LifeSiteNews) – The University Faculty for Life at Notre Dame unanimously passed a resolution condemning the university for its decision to award pro-abortion Vice President Joe Biden with its highest honor, the Laetare Medal.

“Our Faculty for Life Chapter agrees with Bishop Kevin Rhoades that the awarding of the Laetare Medal to Vice-President Biden is a scandalous violation of the University’s moral responsibility (as the American bishops wrote in 2004) never to honor those who act in defiance of fundamental moral principles about the sanctity of life,” the resolution said.

Rhoades admonished Notre Dame for its decision to honor Biden, noting that doing so could “provoke scandal” by giving the impression “that one can be ‘a good Catholic’ while also supporting or advocating for positions that contradict our fundamental moral and social principles and teachings.”  Rhoades cited Biden’s pro-abortion record, which is fundamentally at odds with the Catholic Church’s, and the fact that he served as a “major spokesman for the redefinition of marriage.”

“The Church has continually urged public officials, especially Catholics, of the grave and clear obligation to oppose any law that supports or facilitates abortion or that undermines the authentic meaning of marriage,” said Rhoades.  “I disagree with awarding someone for ‘outstanding service to the Church and society’ who has not been faithful to this obligation.”

The Faculty for Life noted, “Mr. Biden has for decades conspicuously rejected Church teaching about life” by constituently and repeatedly supporting abortion and the taxpayer-funded destruction of embryonic human beings for research.  The resolution cited Biden’s 1998 vote against a law that would have banned creating human beings through cloning, who would then be used for scientific experimentation and subsequently killed.

“Biden would not even ‘impose’ Church teaching upon a man – often the husband or boyfriend of a pregnant woman – who assaults her and kills her unborn baby because she refused to have the abortion he demanded,” the faculty wrote.

“Notre Dame President John Jenkins says that the University this year is honoring civility in public discourse, and not the policy positions of anyone,” the resolution said.  “But it is never uncivil to stand in solidarity with the most vulnerable and defenseless among us…In past years Notre Dame awarded the Laetare Medal to persons who spoke truth to power.  This year, Notre Dame has chosen to honor power at the expense of truth.”

“At a time of some national challenge, when moral seriousness and truthful speech is needed, the University administration offers an embarrassing ‘gimmick’ apparently designed to make Notre Dame seem ‘relevant,’” said Holy Cross Father Bill Miscamble, a history professor at Notre Dame and the President of its University Faculty for Life chapter.  “Instead, the award to Vice President Biden simply cheapens the significance of the Laetare Medal.  It also damages Notre Dame’s commitment to the pro-life cause both on campus and beyond it.”

“Notre Dame will be honoring for his ‘civility’ the second-highest ranking individual in a presidential administration that the university, along with groups like the Little Sisters of the Poor, is now suing on the grounds that its contraceptive mandate—which carries the threat of massive fines—violates our religious liberty,” continued Miscamble.  “Bishop Rhoades had it exactly right when he described the Notre Dame action in honoring Vice President Biden as ‘intellectually incoherent.’”

Holy Cross Father John Jenkins, the President of Notre Dame, criticized those who have expressed concern about the school honoring Biden as uncompromising.  He accused them of “intransigence” lamented the “gridlock of antagonism” that prevents people who disagree on moral issues from “[serving] the common good.”

Notre Dame’s Faculty for Life aren’t the only ones who have spoken out against the university’s decision to honor Biden.  Earlier this month, student groups hosted an on-campus prayer event during which they prayed “for a greater respect for human life, and especially for Notre Dame's commitment to its Catholic identity and to protecting the sanctity of life at all stages.”

In March, 89 Notre Dame students published a letter in the school’s newspaper blasting the university for its decision to honor Biden.  Biden’s “public service has not been ‘to the Church,’ but largely against the Church,” the students wrote.

Nearly 100 faculty members belong to Notre Dame Faculty for Life, which launched at the school in 2011.