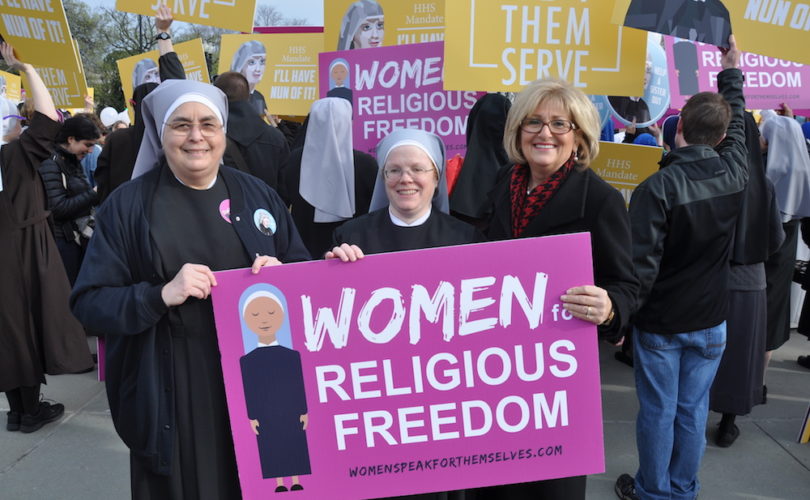 November 21, 2017 (LifeSiteNews) – The Little Sisters of the Poor are returning to court to defend themselves against lawsuits from the states of Pennsylvania and California that would force them to cooperate with the provision of contraception and life-ending drugs.

The pro-life nuns who for years fought the Obama administration’s coercive regulation that forced them to violate their consciences seemed to have been granted relief thanks to President Trump. His administration issued broad regulations exempting conscientious objectors from having to help people get contraceptives and potentially abortifacient drugs.

Under the Obama administration, the Department of Health and Human Services enacted a regulation requiring employers to participate in the provision of contraceptives and abortifacient drugs, even if doing so was against their beliefs. The mandate was a hallmark of Obama’s hostility toward religion.

Several Catholic organizations that were fighting the HHS mandate, such as the Archdiocese of Washington, settled with the Department of Justice after the Trump administration issued the freeing regulations.

The Little Sisters still have to settle their lawsuit against the federal government, which the order’s lawyers at Becket Law said should happen thanks to Trump’s rules.

But after the Trump administration’s regulations were released, Pennsylvania and California sued to take away the exemption that prevents the Little Sisters of the Poor from having to violate their consciences.

“Sadly Josh Shapiro and Xavier Becerra think attacking nuns is a way to score political points,” said Mark Rienzi, senior counsel at Becket Law and the sisters’ lead attorney. “These men may think their campaign donors want them to sue nuns, but our guess is most taxpayers disagree.”

“It is utterly incomprehensible that in a free country like the United States, Catholic nuns who care for the elderly poor are being harassed with new lawsuits to force them to provide contraceptives and abortifacients,” said Maureen Ferguson, senior policy adviser for the Catholic Association. “The Little Sisters of the Poor finally received relief from the federal government’s executive order on religious liberty, yet now the politically motivated state attorneys general of Pennsylvania and California are on the attack.”

Becerra’s lawsuit claims the new rules “allow employers to use religious beliefs as a right to discriminate against employees to deny them a federally entitled health benefit,” the LA Times reported.

Ashley McGuire, a senior fellow for the Catholic Association, said the Pennsylvania and California attorney generals are “known for their liberal bona fides” and “need to get the memo that it's time to move on.”

“No one needs nuns in order to get contraceptives, and no one needs these guys reigniting the last administration’s divisive and unnecessary culture war,” said Rienzi.

But he warned that Trump’s “liberating regs” already face legal challenges “and there’s always the danger that a future administration could simply restore the mandate.”