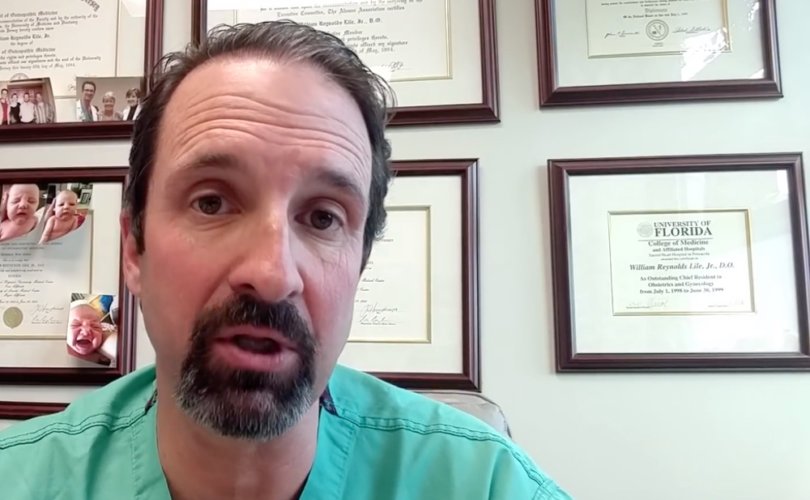 January 31, 2019 (LifeSiteNews) – The pro-life obstetrician-gynecologist who released a viral video condemning New York’s radical new abortion law from a medical perspective is back with a follow-up, in which he explains the truth behind abortion “health exceptions” and why late-term abortions are never the proper response to true medical crises.

Last week, New York’s Democrat Gov. Andrew Cuomo signed the so-called “Reproductive Health Act,” a new law declaring that “Every individual who becomes pregnant has the fundamental right to […] have an abortion,” erases the state’s recognition of preborn babies older than 24 weeks as potential homicide victims, removes abortion from the penal code entirely, and lets health practitioners other than doctors commit abortions.

The New York State Right to Life Committee warns that by declaring abortion a “fundamental right,” it opens the door to invalidating “any limits on abortion” and “mandat[ing] that everyone take part in the culture of death”; prevent pregnant women whose babies are killed in violent attacks from seeing justice; and have the effect of “authorizing infanticide” by repealing the requirement that a second physician be on hand in the event that an attempted abortion past twenty weeks yields a live infant.

Defenders of the law have argued that the law only permits late-term abortions if a “health care practitioner” (who no longer has to be a doctor) determines “there is an absence of fetal viability, or the abortion is necessary to protect the patient’s life or health.” In fact, Roe v. Wade’s companion ruling Doe v. Bolton establishes that in the context of abortion, “health” must be understood “in the light of all factors – physical, emotional, psychological, familial, and the woman’s age – relevant to the wellbeing of the patient.”

Dr. William Lile, a board-certified OB/GYN and pro-life public speaker who maintains the ProLifeDoc website, previously tackled the controversy in a YouTube video and LifeSiteNews op-ed. On Wednesday, he released a second video explaining this so-called “health exception” and why abortion is not sound medicine in such cases.

“Are there reasons that we have to deliver a baby early sometimes? Yes, moms can have conditions of preeclampsia, severe eclampsia, other issues, and we have to deliver the babies,” he said. “But that 24, 25, 26-week baby goes to our neonatal intensive care nursery and does great,” rather than being killed. He stressed that he didn’t blame mothers facing such harrowing situations; he blamed the lawmakers and medical community “that are not proving and showing and revealing the personhood of the life on the inside.”

Lile then discussed three cases in which he treated preborn babies with lethal abnormalities. He explained that just as a sick grandmother who will eventually die of an illness won’t necessarily die immediately and should be cared for until the end, so too in the case of a preborn baby with a lethal condition, such a baby should not be aborted but should be provided with “the love, the concern, and the care” that any patient deserves.

In one such case, “I diagnosed a patient who had a teratoma, a large tumor coming from the base of the tongue. This tumor grew and came out at the mouth,” he recalled. They found a pediatric surgeon willing to attempt treatment, but the mother suffered a miscarriage before the surgery.

“This patient with the tumor coming from the tongue came in, we labored her, we delivered her, she had her husband there, she had other family members there, and I learned a very important lesson that day,” Lile recalled. “It was almost half the size of the baby's head and I laid that up on the mom’s belly. Mom took that baby, held it close, loved that baby and kissed that baby. The father did the same thing.”

“If you had seen a picture of this baby in a medical textbook when you were going through it, you would go and just immediately flip to the next page,” he said. “But there was something different. Not only was this a patient, not only was this a person, this was family. This was kin, and they held that baby for hours, loved that baby and kissed that baby because it was part of their family.”

Lile also discussed cases of Down Syndrome, which does not preclude living a happy or fulfilling life, yet is taken as a reason to abort 90% of Down babies in Great Britain, 65% in Norway, virtually 100% in Iceland, and 95% in Spain.

“Terminating an abnormality is not curing an anomaly. God forbid that our society gets to the point that we take the easy way out and not the better way out,” he said. “If we diagnose somebody with a cancer that's not curable, do we just say ‘we're gonna let you die’? No, we provide them with the love, the respect, and the support that they deserve.”

As the video drew to a close, Lile warned that killing babies for abnormalities would “carry over to the next generation.”

“What are we gonna do when the elderly are diagnosed with a lethal anomaly?” he asked. “And this is happening in Europe where people with a lethal diagnosis are being euthanized. That's not a society that I want to live in. If the United States is going to continue to be a shining light on the hill in this entire world, we need to do what is good, not what is easy.”

Governor Cuomo has dismissed the criticisms so far, but pro-life leaders, commentators, and private citizens across the country continue to speak out against his new law, including actors Dean Cain and Robert Davi. Many Catholic observers are calling on church leaders in the state to deny Holy Communion to Cuomo and other pro-abortion lawmakers who claim to follow the life-affirming church. LifeSiteNews’ petition condemning the radical new law has gathered more than 129,000 signatures so far.