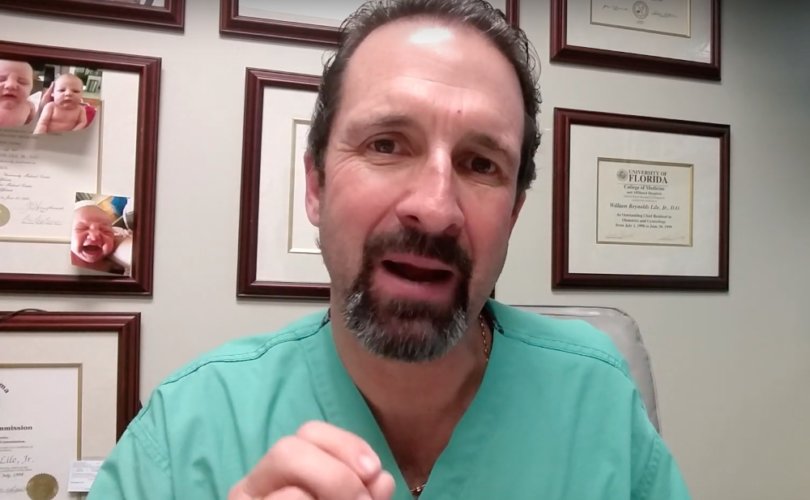 January 24, 2019 (LifeSiteNews) – A pro-life obstetrician-gynecologist is speaking out against New York passing a law this week to enshrine a “fundamental right” to abortion and strip protections from preborn babies until birth, warning that the move will have grave consequences for the character of the state and the nation.

“If they're a patient they're a person, and if they are a person they deserve our protection,” he said in a YouTube video released today.

Dr. Lile emphasized that abortion-on-demand has nothing to do with sound medical practice.

New York’s state Senate voted 38-24 and the state Assembly 92-47 in favor of the so-called “Reproductive Health Act.” Democrat Gov. Andrew Cuomo, who signed the bill, called it a “historic victory for New Yorkers and our progressive values” and ordered the One World Trade Center spire to be lit in pink to mark the occasion.

The bill declares that “Every individual who becomes pregnant has the fundamental right to choose to carry the pregnancy to term, to give birth to a child, or to have an abortion,” erases the state’s recognition of preborn babies older than 24 weeks as potential homicide victims, removes abortion from the penal code entirely, and allows licensed health practitioners other than full doctors to commit abortions.

The New York State Right to Life Committee warns that by declaring abortion a “fundamental right,” it opens the door to invalidating “any limits on abortion” and “mandat[ing] that everyone take part in the culture of death”; prevent pregnant women whose babies are killed in violent attacks from seeing justice; and it will have the effect of “authorizing infanticide” by repealing the requirement that a second physician be on hand in the event that an attempted abortion past twenty weeks yields a live infant.

Pro-life leaders and commentators across the nation have spoken out against the new law.

Dr. Lile, who grew up in New Jersey, noted the cheers and smiles in the New York capitol building when the bill was passed.

“Celebrating what? The governor just signed a law saying that we can take the lives of the babies in the womb up until their due date. That's nothing to celebrate,” he said, noting that babies sometimes need to be delivered early but never killed in the process.

“To take the lives of these babies in the womb breaks my heart. It is not good for us and is not good for America,” he argued. “America is a nation that was founded on virtuous people. You know, our freedom is built on our virtue. You know, [Alexis] de Tocqueville when he came to view America and study Americans, said ‘why is America great?’ His conclusion: America is great because America is good; if America ceases to be good, America will cease to be great.” (Note: Tocqueville never wrote the above quote, which has long been attributed to him by leaders across the political spectrum, though he did express similar sentiments.)

“There are consequences for actions, and unfortunately I think New York State will suffer consequences for this kind of horrible behavior,” Lile predicted. By contrast, he referenced Florida lawmakers’ introduction of legislation to protect preborn babies as soon as their heartbeats can be detected. “That is good; protecting the lives of the babies on the inside is a good thing, it is a virtuous thing,” he said.

“If America wants to stay great, America must continue to be that shining light on the hill and do good. Taking lives of the bab[ies]: not good. Protecting the lives of the bab[ies] and treating them as patients, as persons and protecting them: that is good. And, that's what we will stand up for and that's what we will fight for,” he declared. “We will stand up for those who cannot stand themselves, we will speak out for those who cannot speak for themselves, and we will protect the lives of the preborn.”

Dr. Lile has also written an op-ed published on LifeSiteNews on how medical treatment in the womb demonstrates the humanity of the preborn.