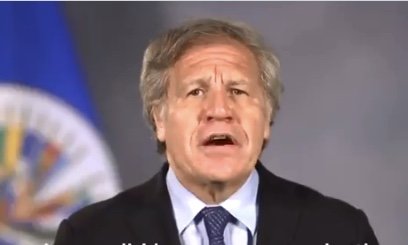 Uruguayan diplomat Luis Almagro is head of the Organization of American States. Twitter

WASHINGTON, D.C., October 7, 2019 (LifeSiteNews) — U.S. pro-life leaders declared in a jointly-signed letter to Secretary of State Mike Pompeo that he should oppose the reappointment of Uruguayan diplomat Luis Almagro as head of the Organization of American States (OAS).

Almagro is being considered for another term as Secretary General of the OAS, which is a regional forum for diplomatic discussion and action that brings together all of the republics of both North and South America as well as the Caribbean.

The letter stated that Almagro, a socialist and veteran of Uruguay’s leftist government, “has routinely used his position … to advocate for abortion.” It called on Pompeo to withdraw U.S. support for Almagro’s re-election, even though Almagro has supported U.S. regional policy toward Marxist Venezuela, Nicaragua and Cuba.

Before the 2016 presidential election, Almagro strenuously opposed then-candidate Donald Trump’s policy proposals. When a Mexican newspaper asked Almagro in 2016 about Trump’s perspective on illegal immigration, Almagro said, “We need to eliminate narratives like Donald Trump's.” As to how the future president’s policies would affect Latin America, Almagro said “we don't need to worry about the imbecilic comments of Donald Trump.”

According to the letter, the “OAS has no mandate under its own charter, the American Declaration of the Rights and Duties of Man, the American Convention of Human Rights or under any resolution adopted by the OAS General Assembly or Permanent Council to promote abortion in the region.”

To the contrary, the letter stated, the American Declaration and the American Convention guarantee the right to life, which according to the latter should be “respected from the moment of conception.” Even before assuming his current role at the OAS, Almagro met with groups in 2015 and declared that “Abortion (among others) … are issues that need to be taken up by the OAS.”

As further evidence of Almagro’s support for abortion as a human right, the letter declared that he has met numerous times with representatives from International Planned Parenthood Federation, which funds pro-abortion groups throughout the American continents. Almagro granted a “lucrative consulting contract” to Dr. Leonel Briozzo, a pro-abortion gynecologist who was a leader in legalizing abortion in Uruguay and presided over the “Montevideo Consensus” that called for eliminating all pro-life laws throughout the Americas.

Any support for Almagro’s reappointment to his post at the OAS would appear to conflict with President Trump’s pro-life stance, which he underlined in his recent speech before the General Assembly of the United Nations and in his nominations to the federal courts, including the Supree Court.

At the UN last week, Trump said, “Americans will never tire of defending innocent life. We are aware that many United Nations projects have attempted to assert a global right to taxpayer-funded abortion on demand — right up until the moment of delivery. Global bureaucrats have absolutely no business attacking the sovereignty of nations that wish to protect innocent life.”

Moreover, Trump said there exists no global right to abortion and added,  “Like many nations here today, we in America believe that every child, born and unborn, is a sacred gift from God.”

According to the recent letter to Secretary Pompeo from pro-life leaders, Almagro’s pro-abortion initiatives are contrary to treaty law. In addition, member states have not given him permission to push abortion. His behavior, read the letter, “puts at risk the legitimacy and authority of the OAS at a time when we need it to be strong and credible to effectively denounce the egregious violations of human rights in Cuba, Nicaragua and Venezuela.”

The letter was signed by Marjorie Dannenfelser of the Susan B. Anthony List, Jeanne Mancini of the March for Life Education & Defense Fund, Catherine Glenn Foster of Americans United for Life, Russell Moore of the Southern Baptist Ethics & Religious Liberty Commission, and Travis S. Weber of the Family Research Center, among others.