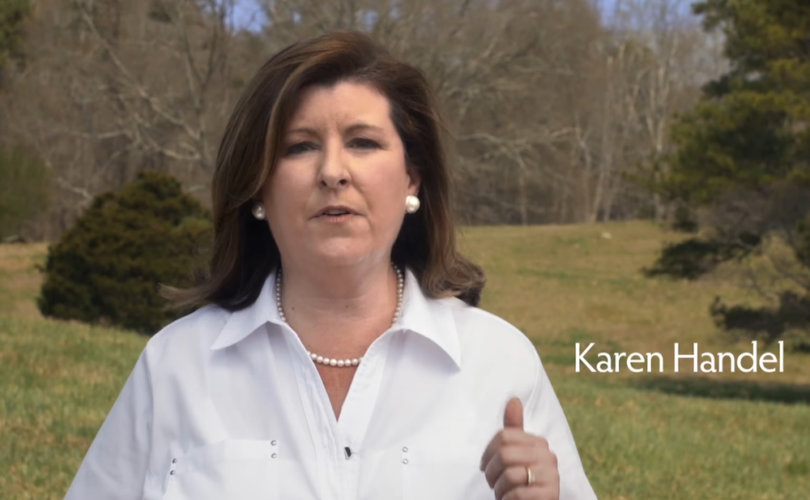 Handel and Ossoff emerged as the top two candidates in yesterday's special election to fill the congressional seat of Tom Price, appointed by President Trump to lead the Department of Health and Human Services.

“We are encouraged to see Karen Handel, a fearless champion of unborn children and their mothers, move forward in this critical race for the pro-life movement,” said Marjorie Dannenfelser, president of the pro-life Susan B. Anthony List, which endorsed Handel. “Handel is by far the best qualified to replace recently confirmed HHS Secretary Tom Price. Her opponent, Jon Ossoff, is an extremist backed by America’s largest abortion business, Planned Parenthood.”

SBA List contacted more than 25,000 voters in the sixth congressional district with three mailers. They advertised Handel's commitment to vote to ban late-term abortions on babies capable of feeling pain, opposition to taxpayer-funded abortions, and willingness to investigate and defund Planned Parenthood.

“Only one candidate has a record of fighting against abortion giant Planned Parenthood,” SBA List told voters.

Ossoff won't be able to vote for himself because he lives with his girlfriend outside of the sixth congressional district.

“Karen Handel is the only candidate with the courage to stand up to the abortion lobby. While working at the Susan G. Komen Foundation, she was instrumental in exposing Planned Parenthood's deception and failure to provide mammograms,” said Dannenfelser. “We need principled pro-life leaders like Karen in Congress to fight for women and children and get American taxpayers out of the abortion business.”