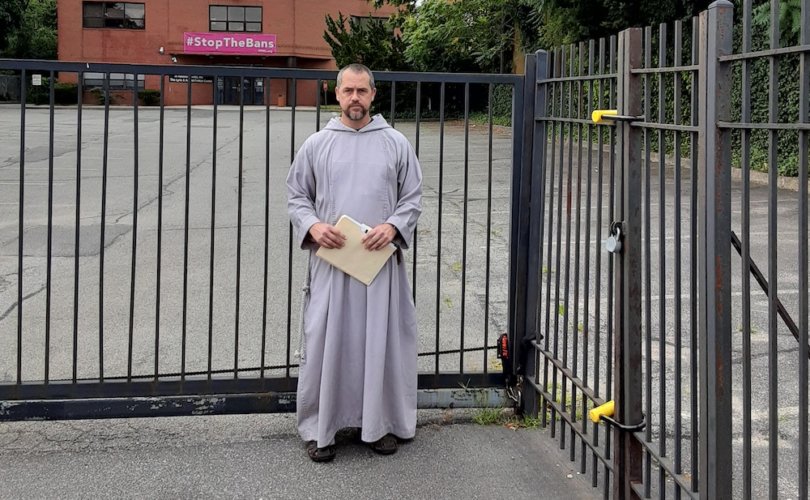 HEMPSTEAD, New York (LifeSiteNews) — A pro-life priest was arrested Thursday for blocking the entrance to a New York Planned Parenthood facility, temporarily halting abortions from being carried out within.

Acting on his own, Fr. Fidelis Moscinski of the Franciscan Friars of the Renewal placed six locks and chains on the front gates of Planned Parenthood’s large Hempstead location, then proceeded to reach out to those outside to reject abortion.

Police arrived approximately 20 minutes later and eventually managed to take off the locks, though in cordoning off the area with vehicles and police tape they had the practical effect of keeping the facility’s entrance inaccessible.

Fr. Moscinski then laid on the ground in the driveway and went limp as the arresting officers carried him away. He was temporarily held at the Hempstead Police Department jail. He has since been released but has been charged with disorderly conduct for “obstructing vehicular traffic.” His first court appearance is slated for July 18.

“It was foreseen that this would allow greater opportunity to speak to abortion-seeking mothers and offer them viable, life-affirming alternatives to abortion,” Fr. Moscinski explained in a prepared statement.

“We have recently been told by Gov. [Kathy] Hochul that in New York abortion remains ‘safe, legal and accessible,’” he continued. “False. Abortion is never safe — it always causes the destruction of an innocent human being and gravely harms the psychological and spiritual health of the mother. Abortion is never legal — it is totally contrary to Natural and Divine Law; not only is it not a constitutional right, no legislature can ever legally sanction willful murder.”

“Planned Parenthood must be immediately defunded, shut down, and prosecuted,” the pro-life priest declared. “Now is the time for pro-life New Yorkers to work for the repeal of the Reproductive Health Act and for the passage of legislation that will protect the right to life of unborn children. Now is the time for all of us to publicly repent of the sin of abortion and seek the forgiveness of a Merciful God. After the time of repentance has passed, we will face the inevitable judgment of Almighty God.”

After his release, Fr. Moscinski said police were a little rough during the arrest but treated him respectfully and professionally at the station. He thanked pro-lifers for their prayers and support, and called on pro-lifers to work even harder to help pregnant mothers and their preborn children in light of the U.S. Supreme Court overturning Roe v. Wade, which has allowed pro-life efforts to finally result in new abortion bans taking effect.

A longtime pro-life activist in the New York area, Fr. Moscinski has been arrested numerous times before for alleged “trespassing” on abortion facility grounds to counsel against abortion and offer women in crisis pregnancies a different choice.

Hochul, a Democrat who has signed multiple laws to even more strongly insulate New York’s already-secure “right” to abortion, envisions the Empire State as a ‘’safe harbor” for those seeking to dispose of their children in the wake of Roe’s fall, which has already led to the banning of abortion in more than 20 states so far.