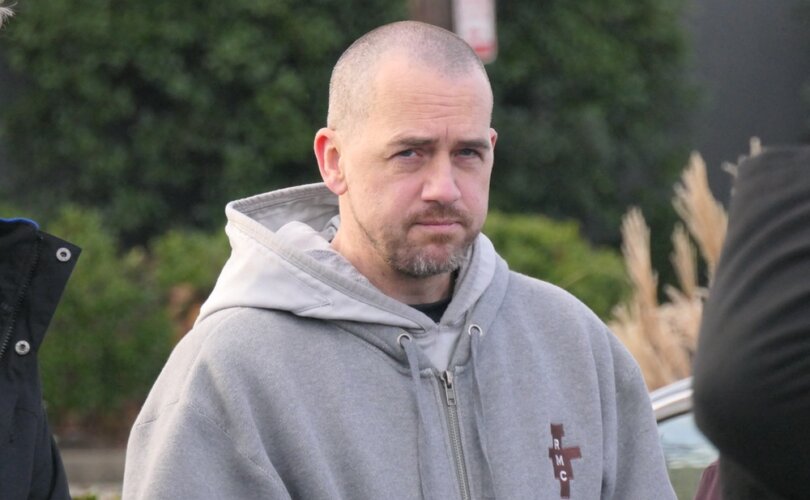 Moscinski, a Franciscan Friar of the Renewal and Red Rose Rescuer, had locked the gate outside an abortion center and prevented cars from passing through it on July 7, 2022.

He will be sentenced on April 24.

The pro-life priest and repeat Red Rose Rescuer conducted this “lock and block” rescue on his own at a Planned Parenthood in Hempstead, New York.

Red Rose Rescues are a form of pro-life activism in which volunteers typically enter the waiting room of abortion businesses and offer the women inside roses and information about alternatives to abortion. The act is a final attempt to save unborn babies from being killed, and rescuers accept that they may be arrested and face legal punishment. They offer these consequences in solidarity with the children who die from abortions.

During the trial, more than 200 pieces of evidence in the form of videos, photos, surveillance, and phone records were presented against Moscinski. Among these was a video interview from EWTN’s Pro-Life Weekly show in which the priest discussed details of the rescue in question.

— Article continues below Petition —
Stand with pro-life priest Fr. Fidelis as he faces jail for defending unborn babies
Show Petition Text
13264 have signed the petition.
Let's get to 15000!
Thank you for signing this petition!
Add your signature:
Show Petition Text

According to Red Rose Rescuer Will Goodman, who was present at the trial, Moscinski’s attorneys argued “the absurdity of these federal charges” being issued after local authorities had only charged the priest with an ordinance violation immediately following the incident.

“However, the pro-abortion Biden administration with Attorney General Merrick Garland chose to aggressively over-prosecute Fr. Fidelis in a most prejudicial way because of his beliefs that preborn human life is sacred,” wrote Goodman.

After considering the evidence, the judge ruled that Moscinski was guilty of violating the FACE Act. The judge said he sided with the government because “all of the elements of the crime were proven.” By this, Goodman explained, he meant that “Fr. Fidelis interfered or intended to interfere (with the murder of babies); the Planned Parenthood is a ‘reproductive health facility’ (which kills babies); and the fact of interference or intention to interfere with (killing babies) was proven beyond reasonable doubt.”

“To practice justice is to give to each one what is his due,” Moscinski said in a statement issued after the trial. “What is due to the preborn children who are in imminent danger of a violent and painful death from abortion? In justice, these children deserve our wholehearted love, protection, and sacrifices. They deserve to be rescued.”

Moscinski continued, “Today’s unjust verdict will not stop rescues from happening. The justice of God will always prevail over the injustices of men.”

“When Father Fidelis chained the gate shut on the Planned Parenthood abortion center, he performed an act completely appropriate in response to the impending extermination of innocent human persons,” Monica Migliorino Miller, director of Citizens for a Pro-Life Society, told LifeSiteNews in a statement. “A true, glorious non-violent act of love and defense against the killing of the unborn. Father also sought to reach out to the women coming to the abortion center.”

Miller added that “the only reason he is convicted of the unjust FACE law is because in New York the unborn count for nothing as Father was denied a ‘defense of others.’ We can hope that Father’s heroic action will inspire others to rescue the unborn. We must be their voice.”

READ: Biden press secretary on persecution of pro-lifers: ‘Just not something I’m going to comment on’

During the July 7, 2022 “lock and block,” Moscinski put six locks and chains on the front gates of the abortion center, as previously reported by LifeSiteNews.

The entrance to the facility was temporarily blocked while police removed the locks. Moscinski proceeded to lay on the ground in the center’s driveway, going limp as he was arrested and allowing himself to be carried away by officers.

Immediately following the incident, the priest was released from jail and charged with disorderly conduct for “obstructing vehicular traffic.”

However, in September, Moscinski was arrested by the FBI and the charges were increased to potential violations of the FACE Act. This escalation took place amid an apparent rise in federal law enforcement targeting pro-lifers. The Department of Justice has charged 26 pro-lifers so far this year for overwhelmingly peaceful protest.

In October, pro-life father of 11 Paul Vaughn was arrested by the federal agency for “conspiracy against rights secured by the FACE Act, and committing FACE Act violations.”

One week before Moscinski was charged, LifeSiteNews broke the story of how the FBI raided the home of pro-life author and sidewalk counselor Mark Houck, arresting him with rifles drawn in front of his terrified children. Houck faces two felony charges of FACE Act violations and began his trial this week.