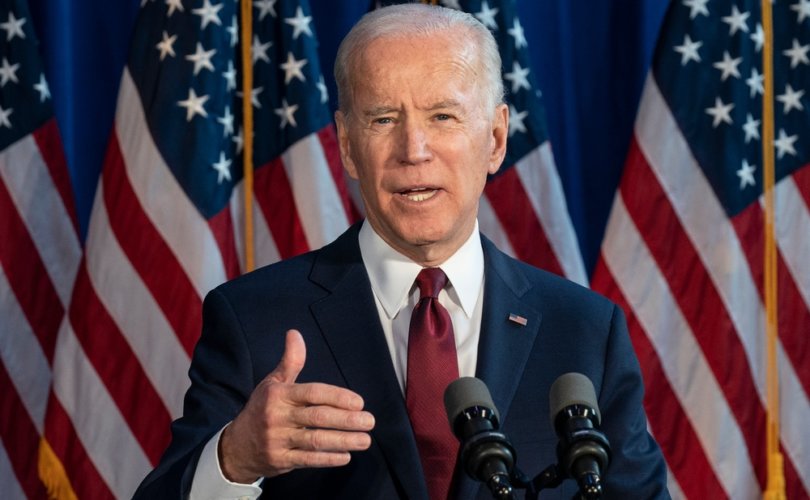 Catholics who tuned into the online meeting were repeatedly steered away from being “single issue” voters as a means to help them overcome qualms of conscience regarding the former VP and his running mate, Kamala Harris, who have pledged unwavering support for maintaining a legal right to abortion across the United States.

The 58 minute-long meeting, attended by LifeSiteNews,  began with short keynote speeches by dissident Sister Simone Campbell, executive director of the Network Lobby for Catholic Social Justice and known for her support for legal abortion, and U.S. Senator Richard Durbin (D-Illinois) who has been barred by Bishop Thomas Paprocki from receiving communion.

Sister Simone “Nuns on a Bus” Campbell claimed that the outlawing of abortion by reversing Roe v Wade “has never been our faith” and dismissed conservative Catholics as “Silly.”

“White Catholics have gotten it wrong” in past elections, said Campbell.

She touted her organization’s new theme, “Helping Catholics see that they are multi-issue voters,” and its new website, PopeFrancisVoter.org, which aims to drive the Catholic electorate to be “in harmony with what Pope Francis teaches.”

The evening’s most extreme assertions came from Dr. Stephen Schneck, retired Director of the Institute for Policy and Research & Catholic Studies at The Catholic University of America and a former Obama White House appointee.

“In his four harrowing years in office, President Trump has proven himself to be the least pro-life president in history,” declared Schneck.

During a five-person panel discussion, moderator Felice Gorordo noted that a high percentage of panelists, including himself, had been heavily influenced by Jesuit education and formation.  Panelist Peter Kellner mentioned he had recently become a member of the board of directors of Jesuit-run America Media, publisher of America Magazine where pro-LGBT Fr. James Martin, SJ, is an editor-at-large.

Top U.S. pro-life priests had plenty to say about the “Catholics for Biden” effort.

Catholics for Biden: Another wolf in sheep’s clothing

“The whole idea of Catholics for Biden is a scam,” said Fr. Michael Orsi, a priest of the Diocese of Camden, New Jersey, who currently serves as parochial vicar for St. Agnes Parish in Naples, Florida, and a former chaplain of Ave Maria School of Law in Naples.

The group seeks “to gloss over his hostility to the Catholic teaching condemning abortion,” Orsi told LifeSiteNews. “It grasps onto the Seamless Garment canard and encourages voters to weigh all of the perceived ‘good things’ that the Democrats promote for social justice. The fact is that all these entitlements presume an equality in the issues.  Unless a person has the right  to life all else is meaningless.”

“What these ‘Catholics for Biden’ forget is that the argument that ‘I am personally against but respect the rights of others to procure an abortion’ is inherently evil,” said Orsi, “since it is causing deaths and leading others to sin.”

“Voting for Biden will broadly expand abortion, even to the time of birth if he were to be elected,” continued Orsi.  “This in itself may cause a voter to at least be responsible for material cooperation in sin.”

“This group is another wolf in sheep’s clothing,” he concluded.

“Just as Satan prowls the earth, looking for more souls to ruin; so often we see disobedient Catholics seeking companionship and support in their scandalous ways,” said Fr. Stephen Imbarrato, an activist pro-life Catholic priest, a regular on EWTN, and a member of Red Rose Rescues, when asked about Catholics for Biden.

“People who talk about ‘single-issue Catholic voting’ are setting up a straw man,” asserted Fr. Frank Pavone, national director of Priests for Life. “We all know there are many issues. But if a candidate came along and said, “I support terrorism,” voters would not ask, ‘OK, but what’s your healthcare plan?’  Certain issues disqualify candidates.”

“But Biden’s ‘Catholic’ problem does not just involve abortion,” Pavone told LifeSiteNews, noting that the Democrat candidate said he would reinstate the HHS mandate as it was before Hobby Lobby.

“Are Catholics for Biden too busy talking about how ‘Catholic’ he is rather than paying attention to the successes we’re having under President Trump?” wondered Pavone.

“Biden has an astonishing lack of accomplishments over his 47-year career in Washington politics,” said Pavone.  “Do ‘Catholics for Biden’ really believe year 48 would be any different?”

Catechism requires Catholics not to vote for Biden, a man in “persistent mortal sin”

“We urge those Catholic officials who choose to depart from Church teaching on the inviolability of human life in their public life to consider the consequences for their own spiritual well being, as well as the scandal they risk by leading others into serious sin,” said Fr. Imbarrato, quoting the teaching of the US Bishops in Living The Gospel of Life (USCCB 1998) #31. “We call on them to reflect on the grave contradiction of assuming public roles and presenting themselves as credible Catholics when their actions on fundamental issues of human life are not in agreement with Church teaching.”

“I challenge anyone, based on the Church's teaching on scandal, to explain to the Catholic faithful how Joe Biden is not in persistent mortal sin from scandal (CCC 2284-2286) and how a Catholic, using their vote, does not commit the grave sin of scandal (CCC 2287) if they vote for Biden.

At the Republican National Convention, Sister Dede famously spoke about the importance of being not just “pro-life” but being “pro-eternal life.”