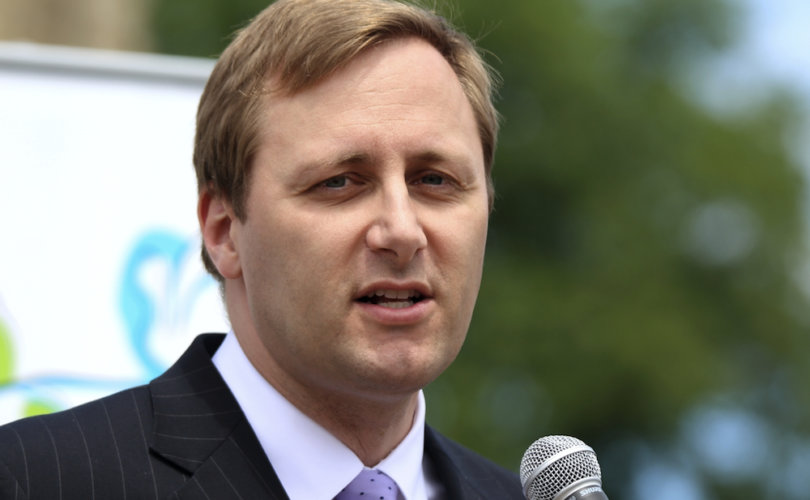 The MP for Saskatoon-University announced his policy in an email to supporters Wednesday.

“The overwhelming majority of Canadians agree that we must protect a baby’s life after he or she is born, regardless of abortion politics,” Trost wrote.

In 2013, three Conservatives MPs asked the RCMP to investigate possible homicides in hospitals and abortion centres, he said.

The MPs had looked at Statistics Canada data from 2000 and 2009 and concluded that 491 babies of 20 or more weeks gestational age were born alive after attempted abortions.

“My friends were concerned that Statistics Canada data suggested that babies who survived a failed abortion may have been left to die or even killed after live birth,” noted Trost, the father of a two-year-old daughter.

But Canada’s Criminal Code “makes it clear that children who survive an abortion have legal rights upon birth,” he pointed out.

“That includes the right to life, including the right to medical treatment. Once born, medical staff assisting at a failed abortion have an ethical and legal duty to care for a baby born alive.”

“I believe we need legislation that undergirds and strengthens the specific, affirmative duty of physicians and medical professionals to provide medical care and treatment to infants born alive at any stage of development,” he stated.

Trost’s announcement came just three days before Saturday’s party leadership convention in Toronto. Votes will be tabulated as the day’s polls close across the country, after which the new Conservative leader will be announced.

Party members have also had the option of mailing in their ballot, which lets them rank 10 choices from a field of 13 candidates.

A number of pro-life MPs, senators and former politicians have endorsed Saskatchewan MP Andrew Scheer for leader. Scheer, a 38-year-old Catholic father of five, was House Speaker from 2011 to 2015, and has maintained a perfect pro-life voting record during his 13 years in Ottawa.

“Brad Trost has from the beginning of this campaign proclaimed not only he is pro-life but willing to do something about it,” says Campaign Life’s national vice president Jeff Gunnarson.

“And for pro-lifers who haven’t yet voted, Brad has just sweetened the pot for them to rank him number one on their ballot,” added Gunnarson.

“Was there ever a leader in Canadian politics over the last 50 years who has made such bold proclamations?”

“Once again, Brad Trost had demonstrated true leadership. He's pulled out another strong social conservative policy that would get broad support amongst grassroots conservatives — and from Canadians in general,” Fonseca told LifeSiteNews.

He pointed to testimony from the “widely publicized trial of ghoulish U.S. abortionist Kermit Gosnell,” which revealed “this abortionist performed beheadings and spinal cord-snipping to murder more than 100 children who were born alive after failed abortions.”

The “Statistics Canada data suggest these post-birth homicides could be happening in Canada too,” Fonseca said.

“I applaud legislation that would force abortionists and their staff to switch from trying to kill the baby, to having to provide care and medical treatment once that child exits the womb and secures the legal rights that are owed them.”

Both Fonseca and Gunnarson stressed that pro-life Conservative members who haven’t yet voted in the leadership contest still can and must.

Campaign Life has launched a website here with instructions on how to do so, including mail-in deadlines and May 27 poll locations.

“There are probably many pro-life CPC members who have procrastinated and haven’t yet mailed in their ballots. Or perhaps you received it late from the party and thought to yourself, 'Aww, it might not even arrive in time, so I won't bother sending it,’” he said.

“Every vote counts to ensure that even if he doesn’t win, a message will be sent to the Party about the popularity of, and desire for, social conservative policies.”

Just how the race will go is anyone’s guess at this point, Gunnarson says.

“Many of the pollsters and pundits who have been speculating on who the winner will be are now admitting that there’s no clear way to know who will surface as the winner,” he told LifeSiteNews.

“Pro-lifers should be confident that a vote for Brad Trost and Pierre Lemieux will not be a wasted vote, but in fact will help to compel the eventual leader to take on our issues.”

“Let’s ensure that the CLC ticket of Trost and Lemieux have the best chance possible to win this thing!” added Fonseca.

“Please check out our guide on how to get your ballot to the party on time.”

Members can also vote in person at polling stations open at various times across the country on Saturday, May 27.

For detailed information on how, when and where to vote, go here.