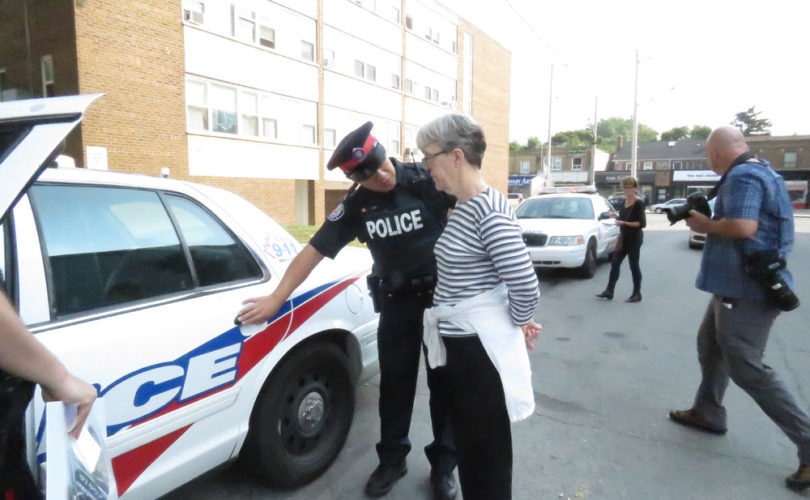 Linda Gibbons is arrested outside while praying outside the Morgentaler abortion facility on September 2, 2015.Lianne Laurence / LifeSiteNews

TORONTO, September 3, 2015 (LifeSiteNews) – Linda Gibbons will remain in jail at least another week after refusing bail conditions yesterday that required the pro-life prisoner of conscience to stay 500 feet away from the Morgentaler abortion center.

After Justice of the Peace Vladimir Bubrin asked Gibbons twice for her name, Crown attorney Daniel Brandes intervened, pointing out that he’s had long experience with Gibbons in court and “I don’t know that I’ve ever heard her speak.”

“I’m not going to call it a charade,” he added. “We’re going to recommend bail, and she won’t sign it.”

Brandes told the court that the 67-year-old Gibbons had a “lengthy record” of similar charges and convictions all relating to “an injunction granted many, many years ago.”

And they have led to Gibbons spending 10 years and seven months in jail to date for essentially walking up and down in front of abortion centers with a sign that says “Why Mom, when I have so much love to give?” – prompting recent comment from the National Post’s Christie Blatchford.

Gibbons is currently charged under a 1999 permanent civil injunction against four named defendants, as well as “John and Jane Doe,” that prohibits certain activities within 500 feet of the Morgentaler abortion center.

Following Gibbons’ last two arrests outside the Hillsdale Avenue location – in August 2014 and March 2015 – the crown dropped all charges, although Gibbons spent three months and seven weeks in jail, respectively, before it did so.

The charges were dropped because in both instances the crown’s case was identical to an earlier conviction that Ontario Superior Court Justice Gary Trotter overturned in July 2014 on appeal.

Trotter tossed out the trial judge’s finding in 2012 that Gibbons’s conduct was “intimidating,” and stated in his ruling that Gibbons had a right to persuade others of her point of view.

But it doesn’t necessarily follow that Gibbons will be acquitted in this case.

Brandes told LifeSiteNews that while the Crown will make “every effort to expedite” Gibbons’ case, it “has an obligation to review disclosures before making any determination.”

That was also pointed out by Gibbons’ lawyer, Daniel Santoro, in an earlier email to LifeSiteNews.

“Trotter’s acquittal in the prior decision was based on the facts of that case in which Linda was peacefully leafletting (not picketing) on the public sidewalk and had no interactions with prospective patients of the clinic or staff,” Santoro explained. “This is constitutionally protected activity.”

“If different conduct were to be established by evidence, that conduct may be found to be a nuisance or intimidation or a breach of some other term in the injunction and could result in a conviction,” he pointed out.

The battle of the injunctions

Santoro knows whereof he speaks, having been in court to defend Gibbons against charges stemming from the two injunctions so often since he became her lawyer in 2008 that he isn’t sure himself of his win-loss record.

“The ultimate answer is 1 win, 2 losses on appeal,” Santoro estimated. “At trial (not including the ones that went up on appeal), I think it is two convictions and three acquittals and two withdrawals.”

Santoro lost his latest case this June when Trotter dismissed his appeal of yet another of Gibbons’ convictions of breaching the Morgentaler injunction.

That one dated back to an August 26, 2013 one-day trial notable for a surprise drop-in performance by septuagenarian lawyer Clayton Ruby, whose longstanding client, abortionist and crusader Henry Morgentaler, had died three months earlier, aged 90.

The trial was also notable for Justice Feroza Bhabha’s palpable anger when two weeks later, she sentenced Gibbons to the maximum six months in jail, refused to credit the pro-life grandmother with an enhanced ratio of 1.5 to 1 for time served, and excoriated Gibbons for being a “martyr for her cause.”

But while providing courtroom drama, Bhabha’s denunciations and Ruby’s extemporaneous advocacy were not grounds for appeal.

Rather, lawyer Santoro argued on May 15, 2015 – the same day Gibbons was released after the Crown dropped the charges for her arrest in March – that the injunction didn’t mention Gibbons, nor was she party to any agreement to it, so to bind her to it was “inherently unfair.”

He also argued that she should have been charged with criminal contempt of court, not disobeying a court order under Section 127 of the Criminal Code.

Trotter responded that to rule that Gibbons is not bound by the injunction because she did not consent to it is an “impermissible collateral attack on the underlying order,” and that “to hold otherwise would render the order virtually useless.”

But to Santoro’s argument that Gibbons should not be charged with the Criminal Code offense of disobeying the court order, Trotter admitted it was “somewhat perplexing” the issue was not raised at the trial, or “in some of her other cases.”

Santoro also lost another appeal in January 26, 2015, this one dating back to Gibbons’ six-year-old charge for breaching the injunction that NDP Attorney General Marion Boyd under Premier Bob Rae brought against 18 named defendants in 1994, and which pro-lifers refer to as “the eighteen.”

Little did Gibbons realize when she was arrested outside the Scott abortion center in January 2009 and charged for breaching “the eighteen” – which carries a maximum penalty of six months – that she would remain in jail for 28 months.

What Gibbons describes as “court cases falling apart” during that time included Santoro’s application to stay proceedings. He argued that for the Crown to charge Gibbons with a Criminal Code offence for disobeying a civil, temporary and by then 15-year-old injunction, was “abuse of process.’

Because Gibbons consistently refused to accept bail conditions requiring her to stay away from abortion facilities, she stayed in jail while the wheels of justice turned interminably, and finally ground to a halt in April 2011, when Justice Mara Beth Greene dismissed Santoro’s “abuse of process” application, and convicted Gibbons of breaching a court order.

According to a LifeSiteNews report, Greene then sentenced her to one day in jail, given that she’d been in custody two years and four months.

Santoro appealed Greene’s decision but that appeal was dismissed January 2015. He says he has no further appeals in the works at this time.

But in an email to LifeSiteNews, Santoro pointed out that while the 1999 Morgentaler injunction is permanent, the 1994 injunction “can be challenged as it is temporary and a direct challenge needs to be brought in the civil court.”

And Gibbons views her various charges over the years as “a maze of impropriety… a litany of legal abuse.”

“The point is, the court is being deliberately misused for deliberate reasons, they’re using the police and the court to play games with us,” Gibbons told LifeSiteNews in an earlier interview. “The injunction was wrong then, and it’s wrong now. It should have been challenged then, and it continues to beg for challenge now.”