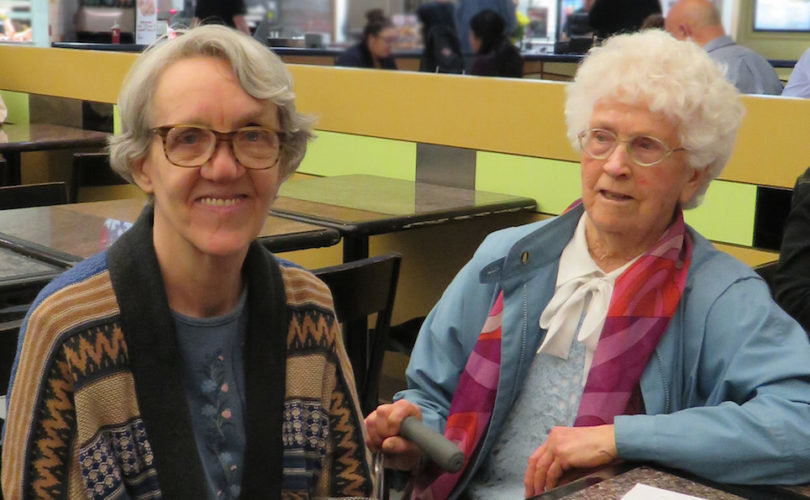 May 15, 2015 (LifeSiteNews) – Pro-life prisoner of conscience Linda Gibbons walked free on Friday after just over seven weeks in jail following her March 24 arrest outside a Toronto abortion clinic while peacefully sidewalk counseling.

Gibbons has been arrested numerous times in the past for violating “bubble zone” laws that prohibit pro-life activities within a certain radius of Toronto-area abortion facilities.

A day after Canada’s national March for Life, which was dedicated to Gibbons and fellow pro-life prisoner Mary Wagner, the Crown dropped all charges against Gibbons because Justice Gary Trotter had acquitted her in July 2014 of the same charges.

“Our case is exactly the same,” Crown prosecutor Monica Gharabaway told the court. Since Trotter’s ruling “is binding on this Court,” the Crown had no reasonable grounds for conviction, she said. Justice of the Peace Tina Wassenaar thereupon declared the matter over.

Lawyer Daniel Santoro said he had been in contact with the Crown behind the scenes to secure Gibbons’s release, although ideally, it should not have taken 51 days to do so.

“I’m happily surprised,” Gibbons told LifeSiteNews after her release. Changed out of her prison greens and joined by friends at the College Park food court, the 64-year-old said she was disappointed to miss the March for Life, but that she was grateful to Campaign Life Coalition (CLC) for its support and recognition.

In a May 5 letter from Vanier jail (see below), written with pencil on lined paper, Gibbons referred to CLC and the “pro-life faithful” as an “intrepid cloud of persevering pro-life witnesses” and expressed her “heartfelt gratitude for your continued coverage of my mission for life at the Toronto abortuaries.”

“They’ve been walking with me through all these years,” she told LifeSiteNews, “Mary and I in jail represent what they’re doing outside of jail, we’re kindred laborers with a unity of purpose.”

Gibbons said she has spent ten years and eight months in jail, with the longest stretch 28 months, during which time her trial was delayed three times.

“It’s for each of us to give it all we’ve got in the way God has called us to go,” when it comes to pro-life witness, Gibbons told LifeSiteNews. “We’ve all carried our crosses.”

But she also urged people to try and “go a little deeper, give a little more” in the battle against the culture of death. She quoted Joan Andrews Bell, whose 31 months in jail – 26 in solitary confinement – in a Florida prison in the 80s galvanized the “rescue” movement that saw tens of thousands of pro-lifers arrested across the United States and Canada in the 90s.

“Joan Andrews said that to the degree that we are willing to identify with the plight of the unborn, who are helpless, defenseless, we make their suffering real.”

Coincidentally, Gibbons’s appeal of another conviction was to be heard Friday afternoon, according to lawyer Santoro. This was a September 2013 conviction by Justice Feroza Bhabha, who sentenced Gibbons to six months for breaching of a court order by sidewalk counseling outside Toronto’s Morgentaler Clinic.

Linda's May 5 letter, written while in jail:

Just a note to express my heartfelt gratitude for your continued coverage of my mission for life at the Toronto abortuaries. Thanks also for including me in your 2015 March For Life program.

Over the years I’ve appreciated CLC’s bold voice speaking with candor on a vast array of life issues and doing so without compromise in values or principles.

Your concerted efforts to defend each and every unborn human life have emboldened me to stay the course, knowing I am surrounded by and follow after such an intrepid cloud of persevering pro-life witnesses.

May God continue to use you mightily in service to His beloved unborn children.

Yours for life, in His love, Linda

After winning an acquittal and appeal, Linda Gibbons is arrested again

Linda Gibbons freed from prison after charges are withdrawn