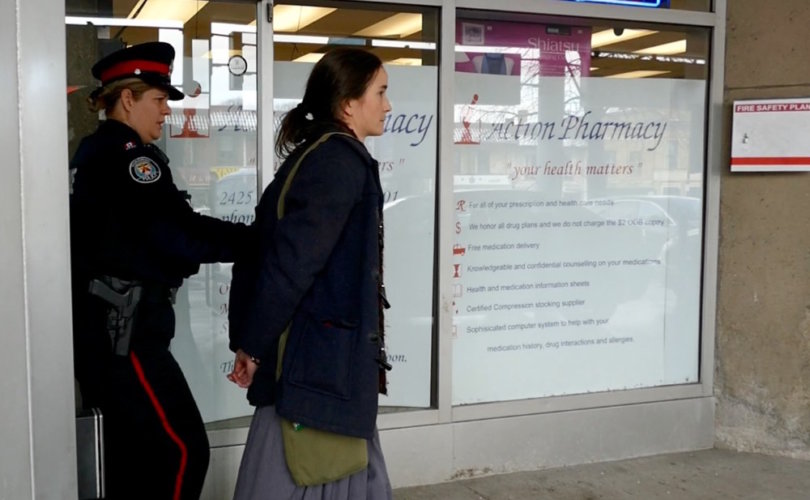 TORONTO, December 23, 2016 (LifeSiteNews) — Pro-life prisoner of conscience Mary Wagner will be in jail for Christmas following her arrest December 12 while attempting to save unborn children and their mothers from the violence of abortion.

Wagner, 42, was arrested at the Bloor West Village Women’s Clinic and charged with breach of probation and mischief.

A devout Catholic, Wagner does not agree to bail conditions requiring her to stay away from abortion facilities, so remains in custody until her trial and conviction.

Sister Immolatia of the Fraternity of the Poor of Jesus Christ, a fraternity founded fifteen years ago in Portugal and which ministers to the homeless and those in prison, witnessed Wagner’s arrest.

“My response to expressions of distress about her arrest is that the radical, subversive love that Mary is living, the personal sacrifice and hardship, are necessary,” Sister Immolatia wrote in a reflection on the day’s events.

“Entering the abortuary to plead with the mothers not to kill their babies she offered bundled red and white roses with baby’s breath, a Miraculous Medal attached to the bouquet, with a card indicating where women can obtain help with their pregnancy.”

Wagner communicated to Sister Immolatia that there were a number of women in the waiting room.

“Many observed in the video of her arrest Mary’s mournful countenance; people have described it to me as ‘grief,’ ‘sadness.’ Indeed, her countenance expressed her agonized heart, but we need to understand the source of her grief,” she wrote.

The abortion center “was full of women who had scheduled the deaths of their babies. It was witnessing this horrific scene and the fact that hearts were so hardened and closed to the Gospel of Life that passed a sword through Mary’s soul.”

The superior of the Fraternity’s Mission Saint Kateri Tekakwitha in Waterloo, Sister Immolatia wrote that she has heard “expressions of sorrow, disgust, lamentation” for Wagner’s arrest.

To these, “the only appropriate response is what I believe Jesus, like Mary, would say: ‘Do not weep for me, do not lament my arrest and imprisonment; weep for these, the littlest of our brothers and sisters, the Holy Innocents, who are massacred here, torn to pieces, whose frail cries are not heard, whose broken, bloodied bodies are thrown in the garbage or treated as objects for research’.”

“Do not consider her personal sacrifice as being locked up inside a provincial prison. In fact, although Mary is behind iron bars she is freer than all of us,” wrote Sister Immolatia.

“By becoming a prisoner of love and a witness for the sanctity of life through refusing to obey unjust laws; by directing her freedom toward God and on behalf of the voiceless, defenseless unborn babies and their mothers, Mary is free in the truest sense,” she stated.

“According to the Catechism of the Catholic Church, ‘[t]he more one does what is good, the freer one becomes. There is no true freedom except in the service of what is good and just…’.”