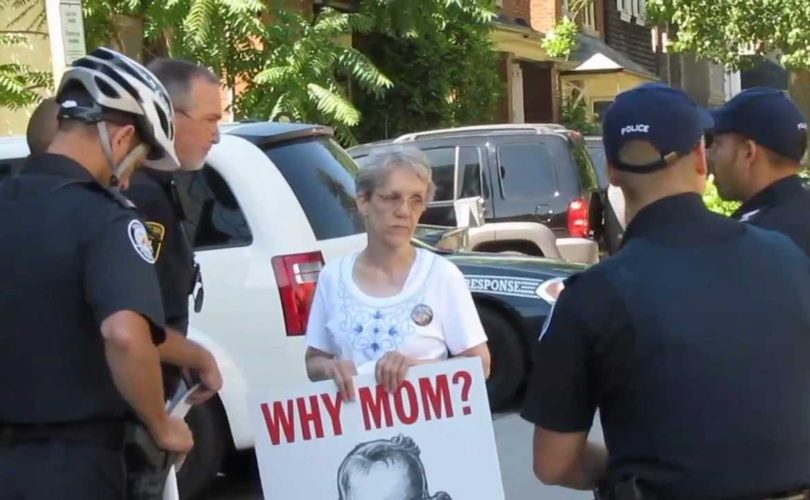 Linda Gibbons is due to appear in court this coming Thursday, September 25 at 10 a.m. in Room 505 of the Ontario Court of Justice at College Park, Yonge, and College Streets in downtown Toronto. The appearance is in relation to her latest arrest, outside the “Morgentaler Clinic” abortion site, on August 7. She remains in custody at the Vanier Centre for Women in Milton.

She is currently facing a charge of disobeying a court order; however, that charge could be altered, withdrawn, or added to at the coming hearing. The prosecution comes despite the fact Gibbons was acquitted on appeal of a similar, previous charge related to an arrest at the Morgentaler site in 2012. In that case, Justice Gary Trotter overturned a lower court ruling finding her guilty and rejected the Crown’s argument that Gibbons had engaged in “intimidating” conduct at the site, mainly because she was brandishing a sign depicting a crying infant.

Her lawyer, Daniel Santoro, said Gibbons intends to plead not guilty to the current charge. He added he has not yet had the chance to peruse disclosure (a summary of the evidence and case against Gibbons).

According to supporters John Bulsza and Bev Clarke, at a previous hearing on September 9, the Crown indicated it was not prepared to present disclosure. They said Gibbons was up early for the hearing and spent many hours in the cold and noisy prisoner waiting area for what amounted to a five-minute hearing. They added Gibbons can receive visits at Vanier, up to two a week, with up to two visitors each time. If spoken to through glass, she does not have to be strip-searched after the visit.

Bulsza and Clark are encouraging others to come out to show their support at the September 25 hearing, when hopefully more will be known.

Meanwhile, Mary Wagner is awaiting word on the status of her appeal after the conclusion this past June 12 of her almost two-year-long trial on charges of mischief and failing to comply with probation orders. She was found guilty and sentenced, but was released immediately because of time served. More significantly, Wagner is using the matter as a test case to constitutionally challenge the current definition of who constitutes a human being in Canadian law.

Her counsel, Dr. Charles Lugosi, is still awaiting word on the reasons for Justice Fergus O’Donnell’s denials of every defence application, including for expert witnesses to be heard, access to abortion centre records, public funding, and standing for a constitutional challenge.

Contributions are still being accepted to her legal defence fund, which is helping defray the considerable costs of a case that could well progress to the Supreme Court of Canada. The latest information is that donations can be made in one of two ways.

In another development, Wagner will be visiting Poland from October 2-16 at the invitation of the local pro-life organization PRO-Prawo do Zycia and will visit many major cities, including Gdansk, the birthplace of the Solidarity movement. It is expected that, during her visit, the Polish movie director Grzegorz Braun will present the world premiere of his documentary about her fight for life for the unborn. Braun and a crew were in Canada during her trial, covering proceedings and interviewing individuals related to her case.