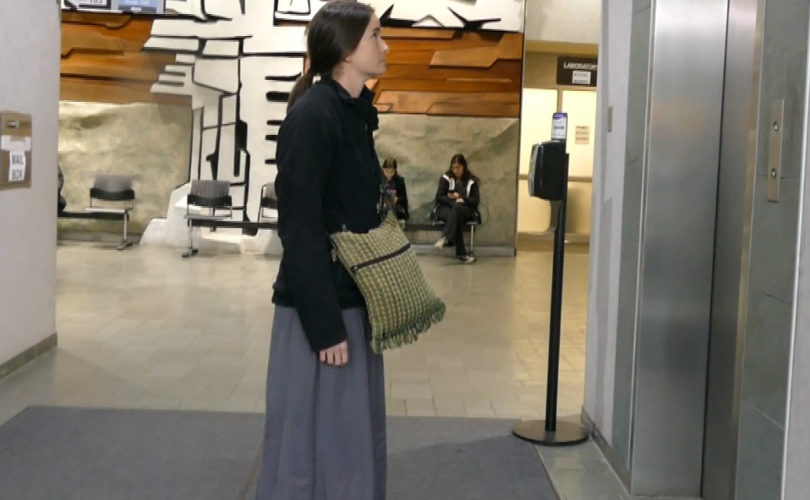 Mary Wagner on her way to Bloor West Village Women's Clinic on the fourth floor, December 12, to counsel women against abortion.Lianne Laurence / LifeSiteNews

Wagner is charged with two counts of failing to comply with a probation order, and one count of causing mischief under $5,000.

The slender, dark-haired 41-year-old entered the Bloor West Village Women’s Clinic, located on the fourth floor of an office building at 2425 Bloor Street, shortly after 9:00 a.m. on December 12, carrying pro-life pamphlets in a bag also filled with red roses.

At about 11:30, Constables Emma Morley and Jason Keegan of Toronto Police Service 11 Division escorted Wagner from the building, and warned her that if she returned to the abortion center she would be arrested.

Undeterred, Wagner entered the building again, and disappeared into the elevator. The officers, meanwhile, left the scene, but returned shortly afterward and arrested the pro-life activist.

It is unclear what happened in the abortion facility, but one source told LifeSiteNews that Wagner allegedly told her by phone while in custody that she had been pushed by an abortion center staff member while attempting to speak to women in the waiting room.

After an initial appearance at Toronto’s City Hall courts Sunday, Wagner was remanded at the Vanier Centre for Women in Milton.

She appeared December 14 at College Park court. Wagner, who had a Gideon New Testament with her, refused duty counsel and told court she would be defending herself.

She chose December 12 to attempt to counsel women at the abortion facility because it is the feast of Our Lady of Guadalupe in the Catholic tradition.

The title refers to the Blessed Virgin’s appearances to a Mexican peasant, Juan Diego, December 9, 10 and 12, 1531, when the Aztecs engaged in large-scale, brutal human sacrifice as worship to their pagan gods, the foremost being the sun god and the “feather serpent,” according to Dan Lynch, national guardian of the Missionary Image of Our Lady of Guadalupe.

The Blessed Virgin asked Juan Diego to go the bishop and request him to build a chapel in her honor. When Juan Diego returned to say that the skeptical bishop wanted proof, she provided miraculous roses, which he gathered up in his tilma, or tunic.

When Juan Diego returned to Bishop Zummaraga and opened his tilma to scatter the roses, the prelate fell on his knees in astonishment: An image of the Virgin was imprinted on the tilma’s rough cloth, which was made of cactus fibers.

In this perpetual apparition, now enshrined in a basilica in Mexico City, Our Lady of Guadalupe appears as a young, pregnant Aztec woman.

Catholics honor Our Lady of Guadalupe as the patroness of the unborn.

Wagner told LifeSiteNews before her arrest that Our Lady of Guadalupe spoke to Juan Diego in his native tongue. She said she similarly hoped to persuade the women seeking abortion to change their minds, by speaking to them in a way they could understand, “to speak to their hearts.”

After Wagner was taken into custody, the only visible proof of her attempt to save women and children from the violence of abortion was a single red rose lying in the corridor outside the abortion center door, its petals strewn on the grey carpet.

Since beginning her full-time pro-life work in 2000, Wagner has been arrested at least six more times, served with numerous probation orders and spent upwards of four years in jail.

She explained her reasons in an open letter published in April 2015 on the Witness for Church and Pope blog: “People have often asked me if I could not simply stay outside the area I am forbidden to enter, and in that way, avoid arrest.”

“But this question forgets something: the children scheduled to be killed will have no one to stand up for them. We will stop being present to them and to their mothers out of obedience to an immorally imposed restriction by those entrusted with authority.”

“If we think in terms of getting arrested or not getting arrested, we lose sight of Christ, hidden in: ‘the distressing disguise of the poor’ – those so poor, we cannot even see or hear them.”

Wagner joins fellow pro-life prisoner of conscience Linda Gibbons at Vanier Centre for Women in Milton. Gibbons was arrested September 2, and will be tried on charges of disobeying a court order on January 13, 2016.

Wagner’s next scheduled court appearance will be by video from the Vanier jail to College Park, December 17 at 9 a.m., Courtroom 505.