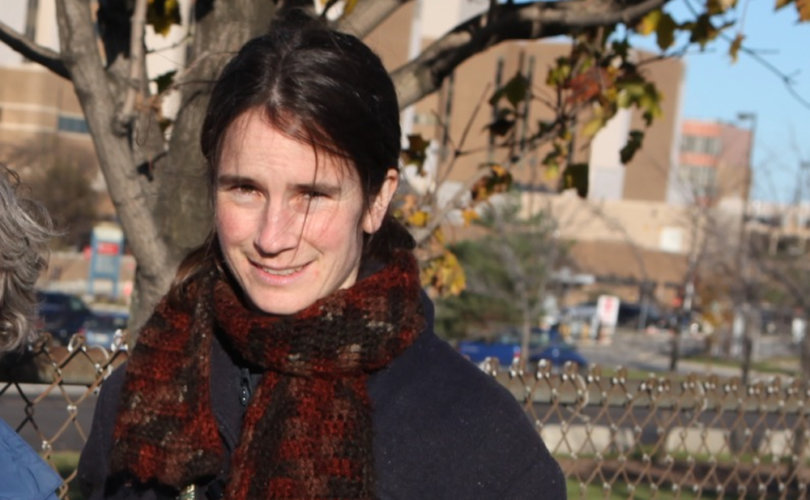 “Mary called from a friend’s car full of excitement and joy,” her mother Jane Wagner wrote in an email to Wagner’s supporters.

“She can see the sky, said seven geese flew overhead as we spoke, and she is going to see her Beloved at Mass. She said she was sad to leave some of the ladies in Vanier [jail] who were praying with her, but she will pray for them now on the outside.”

Justice Neil Kozloff of the Ontario Court of Justice convicted Wagner, 44, of mischief and breach of probation July 12, and sentenced her to 7.5 months, minus the time she had already served awaiting trial.

The convictions arose from Wagner’s arrest December 8, 2017, at the Women’s Care Clinic, an abortion center located on the fifth floor of a medical building at 960 Lawrence Avenue West in Toronto.

Wagner was arrested shortly thereafter and dragged from the abortion facility. Because she refused to agree to bail conditions requiring her to stay away from abortion centers, she remained in jail until her hearing in March.

However, when it became apparent the hearing would go longer than the allotted two days, Kozloff agreed to release Wagner on the sole condition she return to court for the conclusion of her trial.

The trial took longer than expected because Wagner’s lawyer, Peter Boushy, called abortionist Miroslav “Mike” Markovic as witness to grill him on whether his abortion center was lawful, arguing it was relevant because the charge of mischief is defined as “interfering with a lawful operation of a business.”

Boushy also questioned whether the $60 fee Markovic charges for services not insured under the province’s health care plan was an “illegal facility fee.”

Markovic testified the health ministry had okayed the $60 fee, which he said covered such things as “the work that the nurses do,” a hotline, “birth control counselling,” “free birth control,” letters for employers, and pre-abortion “counselling” — which, according to Markovic, had nothing to do with providing an abortion.

When the trial resumed July 12, Crown counsel Kasia Batorska said the question of the abortion facility’s lawful operation had been resolved, and Kozloff found Wagner guilty.

Wagner, who hails from British Columbia, has spent almost five years in jail for her peaceful attempts to save mothers and their unborn children from the violence of abortion.

She came to Toronto because she was inspired in part by the pro-life witness of Linda Gibbons, 70, who has spent almost 11 years in jail for her peaceful witness outside Toronto abortion centers.

In turn, Wagner has inspired the Red Rose Rescues in the United States, which began in September 2017 in Detroit, Washington, D.C, and New Mexico.

Three priests have been arrested in Red Rose Rescues so far: Fr. Stephen Imbarrato of Priests for Life, Father Fidelis Moscinski of the Franciscan Friars of the Renewal, and Father Dave Nix of the Archdiocese of Denver.

Fr. Imbarrato was jailed for seven days in June for a rescue in Washington, D.C., and Will Goodman, Matthew Connolly, and Monica Migliorino Miller were jailed for 45 days for their part in a December 2 Red Rose Rescue at the West Bloomfield abortion center run by Jakob Kalo.

The latter three had the consolation of hearing evidence in court in July that 12 women were no-shows at the abortion center because of their presence.

“Rescue” efforts began in the early days of the pro-life movement as pro-lifers began blocking doors of abortion centers, sacrificially putting their bodies between the mother and unborn child and the abortionist, in an attempt to take onto themselves the violence intended for the child.

The movement reached a peak in the late 1980s and early 1990s, galvanized by the extraordinary witness of Joan Andrews Bell, who spent nearly two of a five-year sentence in solitary confinement in a maximum security prison in Florida before being released in 1988. More than 75,000 people were arrested in the rescue movement and thousands babies were saved as a result of this non-violent civil disobedience.

But the rescues essentially stopped when in 1994, President Clinton signed the Freedom of Access to Clinic Entrances (FACE) Act. FACE made it a federal crime to physically block women from obtaining abortions.

So far, no one in any of the eight Red Rose Rescues in the U.S. has been charged with violating FACE.

WATCH: Police drag Mary Wagner out of abortion facility for trying to save babies

Priest: It was an ‘honor’ to be jailed for trying to save babies inside abortion center