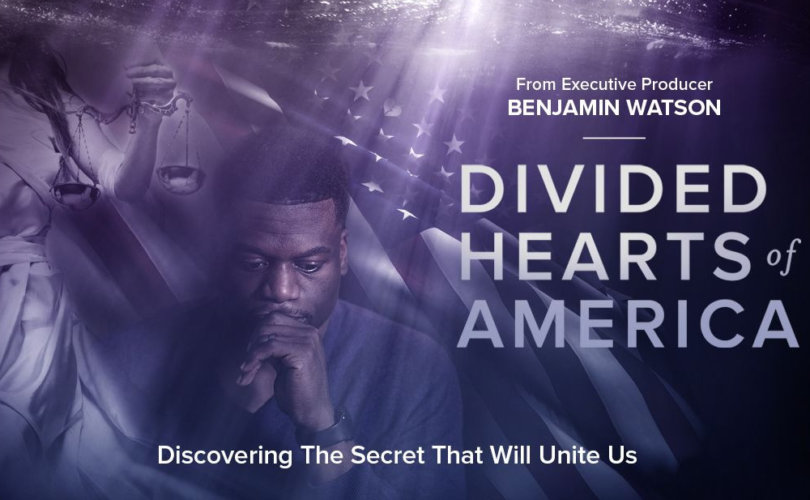 The film, which seeks to give those on both sides of the abortion debate an opportunity to “express themselves as clearly as possible,” airs the thoughts and experiences of people whose lives are touched by abortion in almost every possible way: From an ex-abortionist; to an abortion survivor; to senators, both Democrat and Republican; to post-abortive mothers and a post-abortive father; to the child of a rape victim who chose life.

One of the key themes the documentary explores is the “why” and “how” of abortion’s place in the lives of Black Americans. “My hope is our film reminds our nation that black lives matter because black lives are sacred,” Jones told LifeSiteNews in a previous interview.

Jones explained that although Divided Hearts of America is indeed a pro-life film, “[i]t’s really a pro-American film. What I mean by that is, we made this film because we recognized our country was being torn apart,” said Jones.

“A couple of years ago when Governor Cuomo lit Freedom Tower pink to celebrate infanticide, we saw this as just an epic symbol of denial of America’s founding principle. And that founding principle, the declaration principle that we are endowed by God with inalienable rights, is the source of our unity,” Jones continued.

“We’re not unified in religious traditions, cultural traditions, ethnic heritage. We as a people have always been — the principle of unity from our very beginning was the anthropology of the human person having an inviolable dignity,” said Jones.

Jones revealed that the film was originally going to be titled, Before the Fall, to signify that the legalization of abortion will lead to the fall of the American Republic.

“The director, Chad Bonham’s original title was Before the Fall, because he had a sort of pessimism that we wouldn’t succeed. We decided, we’ll go with the more hopeful title. And as you look at what’s happening in the country today, I think the director maybe had a better title with ‘Before the Fall,’ because we’re telling a tale before the fall of our republic,” Jones admitted.

“Here’s what we know: that our nation cannot weather another 40 years of Roe v. Wade. Our republic will not stand another 40 years of denying our founding principle. And if you turn on the news, you fear we may not survive another year,” Jones continued.

“I’ve always said that the pro-life movement is the most important social movement in the history of our country, not only because we’re protecting preborn children and women from the violence of abortion, but because our republic is at stake, and all of the peace and prosperity and freedom that has gone with the United States existing as a country in the world,” Jones said.

“Joe Biden defended China’s policy on the genocide of the [Uighurs]. Three million ethnic and religious minorities in concentration camps, forced abortions, sterilization, organ harvesting. That speech by Joe Biden was the fruit of his position on abortion. When Joe Biden abandoned the Church’s teachings on abortion, he turned his back on the truth about the human person,” Jones declared.

“The Trump administration declared it a genocide. And yesterday, with an appeal to cultural relativism, Biden shrugged it off. The pro-life movement has been at the heart of all this. So when we’re fighting to defend the child in the womb, we’re fighting also to defend the Uyghurs in slave camps,” Jones continued.

While Jones has a history of producing pro-life films more successful than most, such as the highly acclaimed and award-winning Bella and Crescendo, he acknowledged the possibility of “roadblocks” when LifeSiteNews asked him if he had any concerns about censorship of the film.

“We have to be relentless and creative in finding platforms to share our stories, knowing full well that there will be obstacles placed in our way. Standing up to the spirit of the age has never been easy in the history of the world,” said Jones.

If Jones’ previous films are any indication, Divided Hearts of America has tremendous potential to impact hearts, minds, and lives.

“We know hundreds of women who chose life because they saw Bella,” said Jones. He also shared that one of his other prolifically awarded films, Crescendo, which he made with Justin Bieber’s mother, Pattie Mallette, had raised over $5 million for pregnancy centers and women’s shelters with fundraising events.

“I think we can even do more with Divided Hearts. This is a feature-length documentary and it’s so timely,” said Jones. He explained that “in some states that are more open, you can rent movie theaters for $75.” With a screening fee of $199, it means that for a total of about $300, people can put on fundraisers at their local theaters.

“This will be a great tool to not only educate, but to be an instrument of funding for the pro-life movement,” Jones explained.

“We made this movie, and ‘Movie to Movement’ makes movies for one purpose: to defend the vulnerable from violence by inspiring solidarity and telling the truth about the human person. And I think the best film in the world to do this right now is Divided Hearts of America.”

Divided Hearts of America can be purchased on Amazon Prime Video and YouTube, as well as on its original platform, Salem Now, among others.

Visit the Movie to Movement site to host a private screening of Divided Hearts of America.