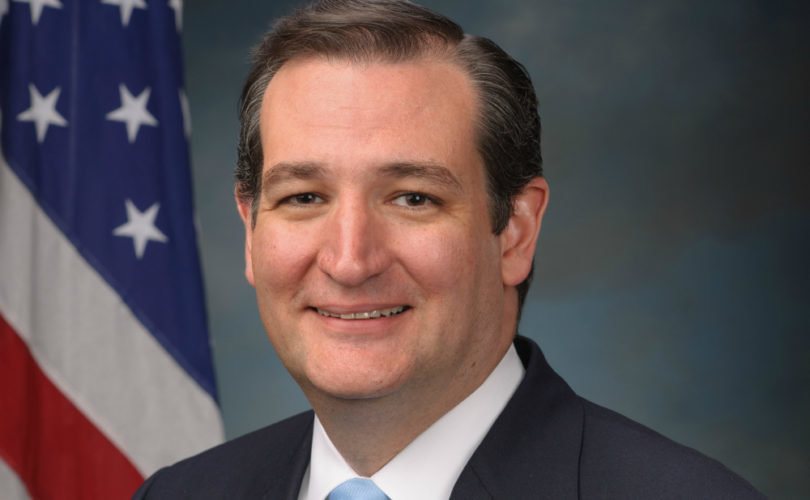 WASHINGTON, D.C., March 23, 2015 (LifeSiteNews.com) — Texas senator and social conservative firebrand Ted Cruz announced his run for the U.S. presidency Monday morning.  The 44-year-old Tea Party favorite posted a tweet at midnight, including a 30-second video beginning with the words, “It's a time for truth – a time to rise to the challenge, just as Americans have always done,” in the senator's own voice.

I'm running for President and I hope to earn your support! pic.twitter.com/0UTqaIoytP

Cruz followed up his announcement the same day with a speech at Liberty University in Lynchburg, Virginia.  CNN counted ten thousand students in attendance.

Tea Party Patriots co-founder Jenny Beth Martin praised Cruz's announcement, telling Breitbart that “(i)n his two short years in the U.S. Senate, [Cruz] has yielded to no one in championing the values of personal freedom, economic freedom and a debt-free future.”  Martin called it “fitting” that Cruz should be the first to announce.

American Principles Project president Frank Cannon concurred, telling LifeSiteNews, “It is smart for a candidate who will rely on grassroots support, both financially and in the early states, to enter early – especially in a big field.”

Cruz's “grassroots” support comes in large part from his status as a stalwart pro-life and pro-family advocate.  He is a regular favorite at socially conservative events and conventions, and he won the presidential straw poll at the Values Voters Summit in 2013 and 2014.

The senator has long earned accolades from pro-life groups for his defense of pre-born children.  Operation Rescue, Students for Life of America, and others praised Cruz for his 21-hour filibuster against Obamacare in September 2013.  The legislation is notorious for clandestinely forcing taxpayers to fund abortion, sterilization, and other life-destroying procedures.  Additionally, last summer, Cruz accepted the ALS Ice Bucket Challenge but refused to donate to the ALS Association, citing that group's support of embryonic stem cell research.  He recommended the John Paul II Medical Research Institute instead.

Cruz also introduced a resolution last Wednesday to defang a Washington, D.C. law, passed in January, that will force employers in the District to cover abortion in their health care plans.

When asked in an interview by National Review's Jay Nordlinger why he is pro-life, Cruz responded, “Because every human life is a gift from God.”

Cruz is outspoken as well on marriage.  This past month, he condemned those federal judges who have sought to redefine the institution through their rulings, calling the courts' endeavors “a real danger to our liberty.”  Cruz elaborated at the time that “the federal government and unelected judges cannot set aside the democratically elected legislature's reasonable decisions to enact and protect traditional marriage.”  In 2013, he told the Christian Broadcasting Network that legally redefining marriage could result in Christian orthodoxy being prosecuted as hate speech, and he announced plans late last year (doubling down this past January) to introduce a constitutional amendment codifying states' right to maintain the definition of marriage as between one man and one woman.