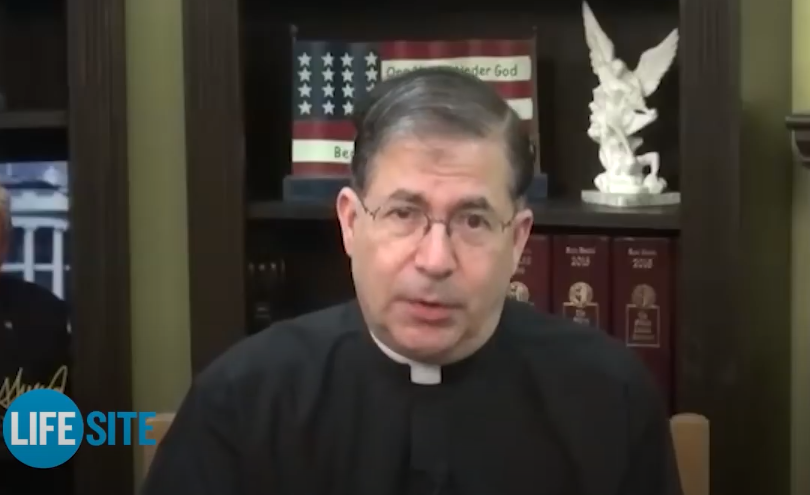 July 29, 2020 (LifeSiteNews) — Fr. Frank Pavone is pushing back against those who think his outspoken support for President Trump is inappropriate for a Catholic priest.

In a recent interview with LifeSiteNews co-founder John-Henry Westen, Pavone said that if the Democratic Party weren’t so aggressively anti-Catholic, there’d be no need for him to speak up, but seeing how the party as a whole has “allied itself with evil,” he can’t remain quiet.

“The Democrat Party has made a covenant with evil. They are in bed with the abortion industry. They want absolutely no restrictions on abortion. They consider it a basic right, and they want us to pay for it.”

Pavone is the national director of Priests for Life. He has been in the news as of late due to his involvement in two pro-Trump political organizations: Catholics for Trump and Pro-Life Voices for Trump. Pavone stepped down from the roles he had with those groups a month ago at the request of the Vatican’s Congregation for Clergy. Some Catholics believe that the request was politically motivated and that it was an attempt by liberal bishops to diminish Catholic support for President Trump in the run-up to the 2020 presidential election.

Pavone continued his remarks by stating, “Joe Biden says he wants to go back to … forcing religious people to violate their faith through the HHS mandate.” But the Second Vatican Council teaches that the “fundamental” rights of the human person, especially the unborn, and the freedom of the Church must be respected by political authorities.

Westen asked Pavone, a native of New York, to clarify what it is he believes his and the Church’s mission should be in the political arena.

“The Church has a religious mission, not a political one,” he continued, “but … in carrying out that religious mission … we must be passing moral judgments even in matters relating to politics. So it’s not like the Church is saying, ‘Oh, we can’t say anything about politics.’ That’s not the teaching! And that wasn't Jesus’s teaching, either.”

Pavone pointed to St. John the Baptist as a historical figure who reminded the political authorities of his own day about the moral law. He also praised Cardinal Clemens August Graf von Galen of Germany (1878–1946) for refuting the Nazis during World War II.

When Westen asked him how he can support a man who has done morally questionable things in his own life, Pavone responded by saying we elect presidents to do a job similiar to how “we want to choose an auto mechanic who’s actually going to make the car run.”

“And when we’re making those kinds of choices, we’re not looking into the person’s personal history or virtues. I don’t ask the auto mechanic how many times he’s been married. I ask him if he knows what’s wrong with my car and if he can fix it at a reasonable price and in a reasonable time frame.”

President Trump, Pavone said, has stood side by side with the unborn and defended the Church’s freedom from those who want to shut it down. He has “fixed so many of the problems in our country unlike any other president has done.”