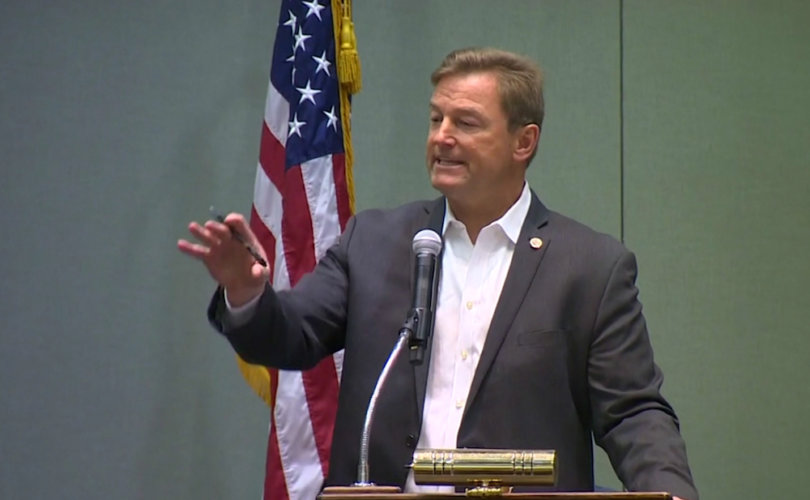 NEVADA, April 18, 2017 (LifeSiteNews) – Sen. Dean Heller, R-NV, told constituents “I will protect Planned Parenthood” and that he has “no problem with federal funding” for America's largest abortion provider. His communications director is walking back the remarks, saying Heller is “opposed to providing federal funding to any organization that performs abortions and is supported by taxpayers' dollars.”

Heller made the pro-Planned Parenthood comments this at a town hall on Monday. He's up for re-election in 2018 and considered “vulnerable” to being defeated.

Although abortion advocates cheered at Heller's pro-Planned Parenthood statements, they were angered that he used language about community health centers, which don't commit abortions. The woman who questioned him said she went to Planned Parenthood when she was 13 and needed a pregnancy test.

“It isn't just Planned Parenthood” that provides women's healthcare, Heller said. He pointed to “community health clinics around this country,” which resulted in booing and angry shouts.

“We'll continue to look at this issue,” Heller said when pressed about whether he would commit to supporting federal funding of Planned Parenthood. The crowd booed.

“Senator Heller has worked hard to improve women's access to health care and the quality of care they receive,” Megan Taylor, a spokeswoman for Heller, told LifeSiteNews via email. “While he doesn't have a problem with many of the health care services Planned Parenthood offers to women, he is opposed to providing federal funding to any organization that performs abortions and is supported by taxpayers' dollars; he has a long record that reflects his position.”

“The resistance [to Trump and Republicans] scored another victory” when Heller flip-flopped on Planned Parenthood, the article claimed.

In 2006, as Nevada's Secretary of State, Heller publicly supported abortion.

“I'm a Mormon and I teach Sunday school every week, but I do back a woman's right to choose abortion,” he told the Las Vegas Review-Journal. “It is the conservative position.”

Since being elected to the U.S. Senate, Heller has voted in favor of ending late-term abortions and defunding Planned Parenthood. His senate.gov website touts this, saying Heller's “record is clear on pro-life issues.”

Heller has made other noncommital statements on abortion, such as Roe v. Wade is “a court issue, not a legislative issue” and “when I was back in Nevada … my personal feelings were that I was pro-life, but I had a libertarian view on it.”

Here's the angry reaction @SenDeanHeller got today as he tried to talk around a question about Planned Parenthood (@PPact) funding. #NVSen pic.twitter.com/YOsbXqrKa1