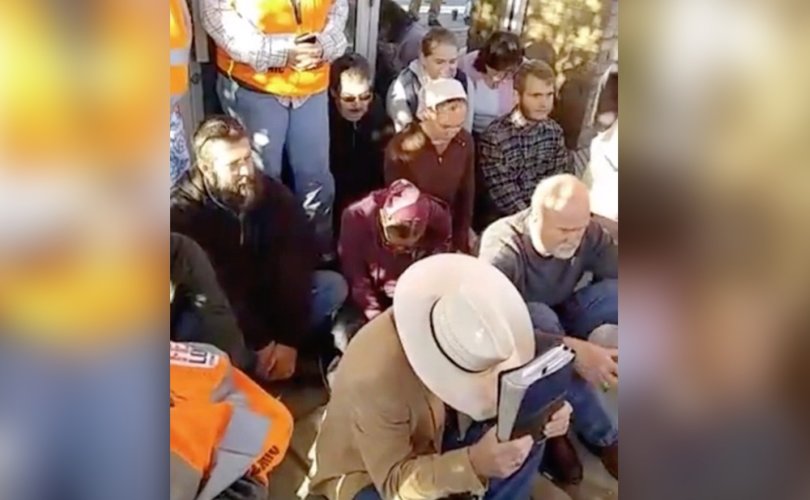 LOUISVILLE, Kentucky, May 17, 2017 (LifeSiteNews) — Pro-life “rescuers” were arrested for blocking the entrance to Kentucky’s last operating abortuary on Saturday.

Ten people out of about 100 demonstrators at the EMW Women’s Surgical Center were taken into custody and charged with criminal trespassing under the state's Freedom of Access to Clinic Entrances law.

Video footage shows the “rescuers” sitting in front of the doors of the abortion clinic, blocking them with their bodies so that no one could go into the building. They can been heard praying and singing.

According to police, the “rescuers” had interlocked their arms so as to physically stop anyone from entering the abortion business. Police arrested them after repeatedly asking them to leave.

The event was organized by Operation Save America (OSA), formerly known as Operation Rescue.

But the “Rescuers” said that breaking the law and getting arrested is a small price to pay when compared to saving a baby’s life.

All those arrested were charged and released.

The “rescuers” ranged in age from teenagers to 82 year-old Eva Edl of South Carolina.

Edl, who has been arrested over 40 times for “rescues,” calls abortion businesses “death camps,” for deeply personal reasons.  She herself was sent to a Serbian death camp when she was a young girl.

“I just wish the good Christian people of my country would have gathered in front of my death camp when we were shipped in,” she told the Courier-Journal.

A pre-recorded video message from the organization behind the event, which was released during the “rescue,” explained the reason behind the action.

“Greater love has no one than this: that one lay down his life for his friends,” the video states.

“A small band of committed Christians … are risking arrest for one reason: to rescue their pre-born neighbors that are led away to slaughter,” OSA Director Rusty Lee Thomas said in the pre-recorded video.

“There are no other ministries or organizations sponsoring this event,” he added.

Thomas defined the “rescue” as “exercising the Christian doctrine of ‘Interposition,’” which happens, he said, “when one stands in the gap between the oppressor and the intended victim, and by standing in the gap, rescues the victim from the oppressor’s hand.”

He said he hopes the demonstration will influence Governor Matt Bevin, state legislators, and sheriffs and police in Kentucky to do more to help the pre-born targeted for abortion.

“Simultaneously, we are using this as an example to call the state to interpose within their God-ordained authority,” Thomas added, “which is to defend the lives of these pre-born by ignoring Roe versus Wade, establishing justice, and abolishing abortion now.”

Referring to Operation Rescue’s activities during the 1990s, for which members of the group were successfully prosecuted, Thomas said this kind of direct intervention of peacefully blocking abortion clinics hasn’t been attempted in over twenty years.

Operation Save America has announced a much larger demonstration at the Louisville abortion facility for July 22-29. Thomas described the planned demonstration as “a tremendous opportunity … to become the first surgically abortion-free state in the United States of America.”

The state's last abortion clinic has been facing closure for not having a proper license, because the business didn’t have local hospital privileges.  In April, a federal judge ordered that the abortuary remain in operation.