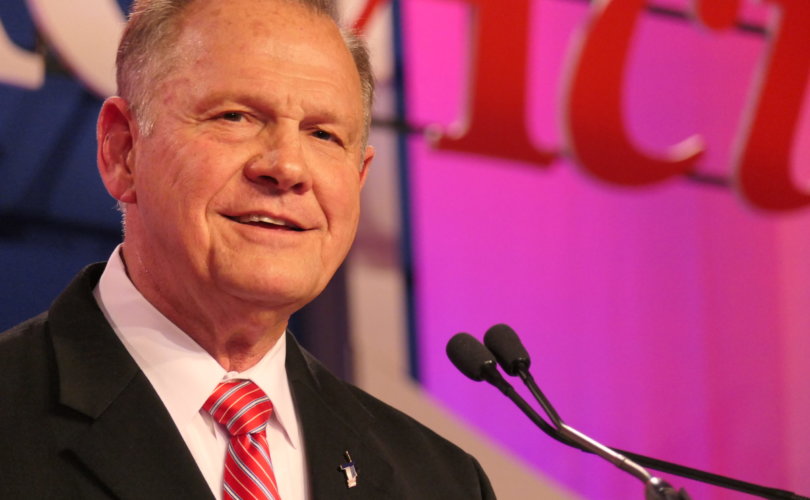 Jones supports abortion on demand throughout all nine months of pregnancy, right up until a baby is born.

Roy Moore won a landslide victory against Sen. Luther Strange in a primary runoff for Alabama’s open Senate seat at the end of September.

Moore has called “abortion” one of the moral plagues that “sweep[s] our land.”

Jones recently defended his support for abortion without limits to NBC’s Chuck Todd.

Jones responded to Todd’s question on whether he supports any abortion limits by stressing he wants “to make sure” people have “access to the abortion that they might need, if that’s what they choose to do.

“I’m not in favor of anything that is going to infringe on a woman’s right, in her freedom, to choose,” Jones said when Todd pressed him on if he’d support banning abortions halfway through pregnancy at 20 weeks.

“I want to make sure people understand that once a baby is born, I'm going to be there for that child, that's where I become a right-to-lifer,” he concluded.

Jones’ comments caused Susan B. Anthony List President Marjorie Dannenfelser to blast his “extremism” as “dramatically out of step with Alabama voters.”

Alabama is one of 20 states to prohibit most abortions on pain-capable humans in the womb. President Trump has promised to sign the Pain-Capable Unborn Child Protection Act if it passes the U.S. Senate. It has already passed the U.S. House.

Moore told LifeSiteNews his top priorities in the U.S. Senate will be “to bring back the Constitution and knowledge of God, which underlines that Constitution.”

“We’ve got to understand what the framework for government is or we can’t really get back to what we should be,” he said.

During his speech to the Values Voter Summit (VVS), Moore read a 2007 poem he wrote about morality and returning to God.

Moore is outspoken about the need for religion and morality in public life. He founded the Foundation for Moral Law, which “exists to restore the knowledge of God in law and government and to acknowledge and defend the truth that man is endowed with rights, not by our fellow man, but by God.” Moore’s wife Kayla is the Foundation’s current President.

The campaign has “been tiring, but it’s been fun – except for the negativity and the false ads and the false attacks,” Mrs. Moore told LifeSiteNews. “That’s not been fun. I don’t wish that on my worst enemy.”

“Crime, corruption, immorality, abortion, sodomy, sexual perversion sweep our land,” Moore said at a September 21 debate. “When we become one nation under God again, when liberty and justice for all reigns across our land, we will be truly good again.”

Moore quoted the Bible during his speech, which was met with loud support from attendees.