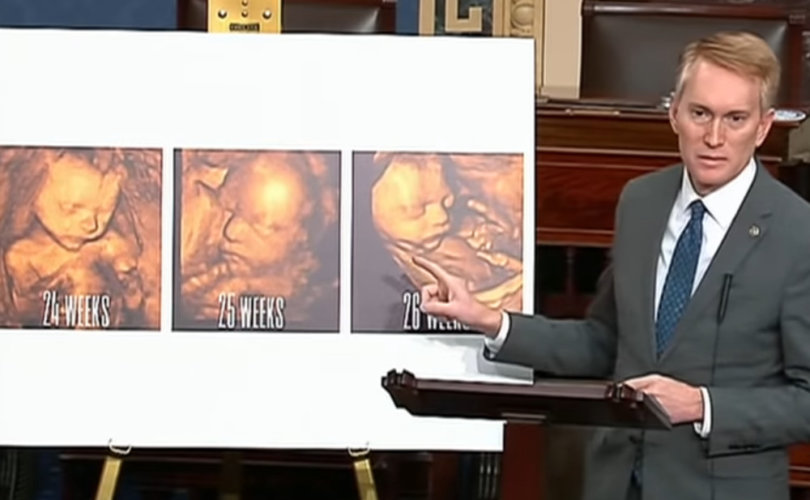 WASHINGTON, D.C., February 17, 2021 (LifeSiteNews) — It’s probably the most important biology lesson a U.S. senator has ever given. “Please don’t tell me you follow the science wherever it goes,” Sen. James Lankford (R-OK) told pro-abortion listeners, “because some facts are obvious and the science is clear.”

Lankford began his gripping 20-minute speech by contrasting the anger people feel at parents who thoughtlessly leave their infants in mortally hot cars with their indifference to the ones who go to abortuaries to have their slightly younger babies killed.

Reflecting on broadcast news about an infant who died in a stifling car, the senator recalled that he had turned to his wife and said, “I can’t figure out our culture sometimes because that same mom and that same baby could have gone into an abortion clinic just a few months before. The child’s life could have been ended, and it wouldn’t have made the news. In fact, no-one would have flinched.”

Lankford continued, “The very same people who were furious with that mom for leaving her child in a hot car to die would have argued for her right to destroy that exact same child — in fact, would have called it her ‘reproductive right’ or even the new euphemism out there: ‘reproductive care.’”

Reproductive care, the senator made clear, means paying someone in a clinic to reach into a mother’s womb with tools and “pull the arms and legs off a child … so they will bleed to death in the womb.”

“And I don’t understand why that’s normal but leaving a child in the backseat of a hot car is a tragedy,” Lankford said in a level voice.

The senator then presented the chamber with a placard with photographs of an unborn child at 24-, 25-, and 26-weeks’ gestation.

“Some people are afraid to answer the most obvious question,” Lankford said. “Is that a baby?”

He pointed to the face, eyes, nose and chin of the photographed unborn infant.

“That’s really the only question,” he continued. “Is that a child?”

Lankford also asked the senators if all children were valuable — “or only some?” He observed that they could all agree that gold was valuable but not that all children are valuable. The senator opposed the idea that the value of children lies only in whether or not their mom or dad want them. Parents shouldn’t get to decide “who’s precious and who’s medical waste,” he said.

The senator reflected that people sometimes try to get out of answering the question — “Is that a child?” — by asking pro-life people if they care about the born. He listed a number of bills that he has voted for that promote the good of other vulnerable groups, including children outside the womb and the elderly. But, ultimately, this counter-question is a distraction, he believes.

Lankford reflected on the sufferings of parents who have been to abortion clinics before he remarked on the sad anniversary of Roe v. Wade.

“Forty-eight years ago this week, the Supreme Court made a decision that has now resulted in the death of 62 million children,” he said. “That is hard to fathom.”

The senator observed that America has never forgotten that particular Supreme Court judgment. He then paid tribute to those who, since 1974, have come to Washington, D.C., to participate in the March for Life. Near the end of his speech, he took the time to address this year’s (virtual) March for Life participants directly.

“Good for you,” he said. “Keep going. Don’t give up. Defend the facts that are self-evident. Speak up for those who can’t speak for themselves because millions of future Americans are counting on it.”

Lankford contrasted the pro-life response to Roe v. Wade with Joe Biden’s. He noted that soon after taking the presidential office, Biden celebrated the 1973 Supreme Court decision by “declaring that he wants to pass a federal law requiring abortion to be provided in every single state in America” and also requiring taxpayers to pay for it.

Biden has also promoted abortion by nominating Xavier Becerra to serve as the U.S. Health and Human Services (HHS) Secretary, Lankford pointed out. Mentioning first that it would have made more sense to have an actual physician as HHS Secretary, the Oklahoma Senator showed that Becerra’s record on promoting abortion is appalling.

As Attorney General for California, Beccera went to Mississippi to fight an effort to end the abortion of unborn babies old enough to feel pain. He also tried to force the Little Sisters of the Poor to provide contraception. He even fought to require churches to pay for so-called “abortion care” in their health care plans “when it directly violated their religious beliefs,” Lankford recalled. Previously, as a member of the House of Representatives, Becerra voted against the Born Alive Protection Act, the partial birth abortion ban, and the Unborn Victims of Violence Act.

Becerra has even attempted to get pro-life medical centers that offer ultrasounds to put posters on their walls referring for abortion.

“This is beyond just protecting abortion,” Lankford said. “That has moved to promoting abortion, encouraging the death of children.”

The senator from Oklahoma said that Becerra is “so bizarre” that as California’s Attorney General he decided not to go after Planned Parenthood for trafficking in body parts but to go after the whistle-blowers instead.

“It’s just a shock to me that all of those things seem normal,” Lankford said. “I don’t understand that.”

“Facts are facts, especially when those facts have a face”

He said he can’t believe someone who has been picked to lead HHS “can say that children are sub-human.”

In contrast, Lankford believes that children are human and that “we should honor every child’s life.”

“Facts are facts, especially when those facts have a face,” he said. “How can you look at that picture and say, ‘That’s not a human child?’”

The senator then pondered the difficulties of those lawmakers who have fought for abortion to admit the humanity of the unborn, for then they would have to admit that the deaths of millions of children have happened “on their watch.”

But he had some choice words for them all the same.

“Please don’t tell me you follow the science wherever it goes, because some facts are obvious, and the science is clear,” he stated. “Is that a child or not? Because everything else [flows] from that.”

To thank Senator Lankford for his speech on behalf of the unborn, please contact him by email here, or contact him at one of the following addresses: