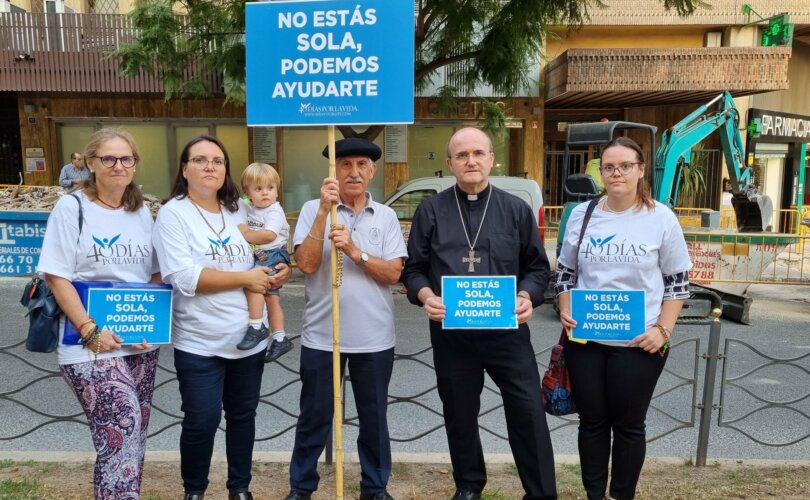 ALICANTE, Spain (LifeSiteNews) — A pro-life Catholic bishop in Spain recently defied abortion mill “buffer zone” laws by praying for an end to the practice while standing outside of a clinic where the ghastly procedure is performed.

On November 2, the Feast of All Souls, Bishop José Ignacio Munilla of Orihuela-Alicante in Spain, prayed outside of a local abortion mill, effectively ignoring the country’s prohibition on having a pro-life presence near such facilities.

“On this day of #TodosLosFielesDifuntos (All the Faithful Departed) I participated in the 40 Days for Life campaign, praying before an abortion center in Alicante,” Munilla tweeted on Wednesday afternoon, including a picture of himself and other pro-lifers standing together outside of an abortion clinic holding pro-life signage and wearing “40 Days for Life” shirts.

Munilla’s photograph of him participating in the 40 Days for Life Campaign – an internationally coordinated campaign that aims to end abortion locally through prayer and fasting, community outreach, and a peaceful all-day vigil in front of abortion businesses – drew the attention of other pro-lifers as being courageous, notably because of the Spanish senate’s adoption of a bill this April that made it illegal for pro-lifers to carry out activism in close proximity to abortion clinics.

As reported by LifeSiteNews, the recently-enshrined law characterizes pro-life witnessing near abortion clinics as harassment, strictly prohibits the practice, and subjects violators of the law to a jail sentence of up to three months.

In his tweet, Munilla denied that abortion is politically progressive, as it is often described, saying “if abortion is progressivism, then the law of the jungle is the height of democracy!”

Under current Spanish law, abortion is legal up to 14 weeks of pregnancy, with later-term abortions also being permitted if there is a so-called risk to the mother’s life or if the baby suffers from birth defects.

Help 11 arrested pro-life activists being persecuted by the FBI
11 Christians are facing jail time because they tried to save unborn babies. They need our help to pay for their defense attorneys and other expenses.