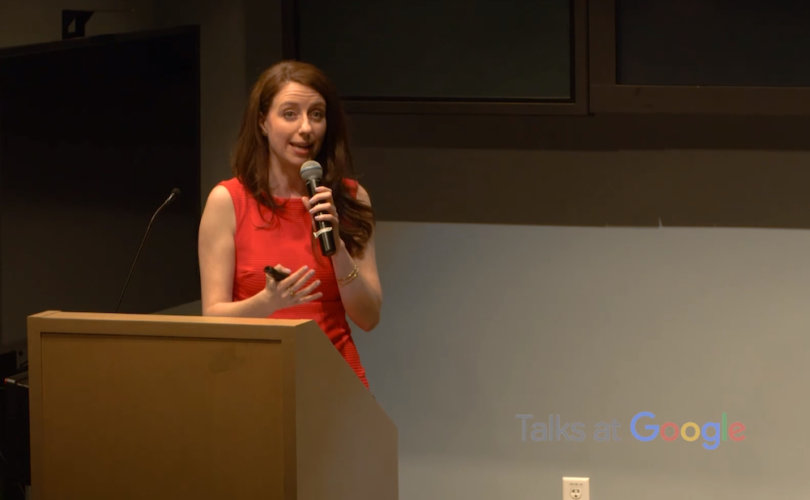 Gray, the co-founder of the Canadian Centre for Bio-Ethical Reform who now speaks with her “Love Unleashes Life” ministry, presented Abortion: From Controversy to Civility” to the Internet giant’s audience in April. She employed the Socratic method of questions and answers leading to productive dialogue in making the case for life.

Gray’s talk, published June 19, surpassed Richards’ 1,200 views in its first day and was sailing along toward 5,000 views and counting by press time June 22.

The Talks at Google program presents authors, scientists, actors, artists, filmmakers, musicians, speakers, and others to Google’s California headquarters for presentations focusing on their work.

The stats on Gray’s talk are remarkable not only because they trounced a pro-abortion message, but Google is known for harboring a more liberal mindset.

Google has faced questions of its objectivity because of search results yielding more liberal-leaning websites than conservative ones and for having refused advertisements about abortion containing religious content.

Earlier this month, Google celebrated the creator of the rainbow flag as a symbol of gay pride on the first anniversary of his death, and in April an ad released for Google Home, the company’s personal assistant software promoting same-sex “marriage” and adoption.

Controversy ensued several years ago after the tech giant reportedly removed crisis pregnancy center ads at the urging of abortion industry agents. It was later determined the reports may have been largely fabricated by the abortion activists. Not soon after, however, “crisis pregnancy search” results entered into Google’s search engine brought up Planned Parenthood.

Gray spoke to her Google audience about people who inspire others and what sets them apart. She detailed three qualities found in such individuals: putting others ahead of themselves, having perspective, and doing the right thing even when it’s hard.

Gray proceeded to argue the pro-life position with facts, anecdotes and analogies, elucidating how life is defined and when it begins. She detailed how each of those qualities, when utilized, lead to supporting human life.

During the question and answer session afterward, Gray explained that when starting conversations, whether in an environment that’s friendly or not, it’s best to begin with with open-ended questions.

In countering the position that one should not impose their pro-life position upon others, analogies are helpful, she said. And then she laid out how laws against other offenses such as rape and murder, for example, when applied the same way to abortion, would have the same end.

This is true because as Gray established earlier in the talk, the unborn child is a human being with human rights, raising the question then of whether it is right to have a law allowing the ending of their life.

Gray wrapped up by addressing the abortion mantra of supporting “a woman’s right to choose.” She told the Google audience the sentence has to be finished, the question of choice is left hanging, and that one needs to define what is meant by choice.