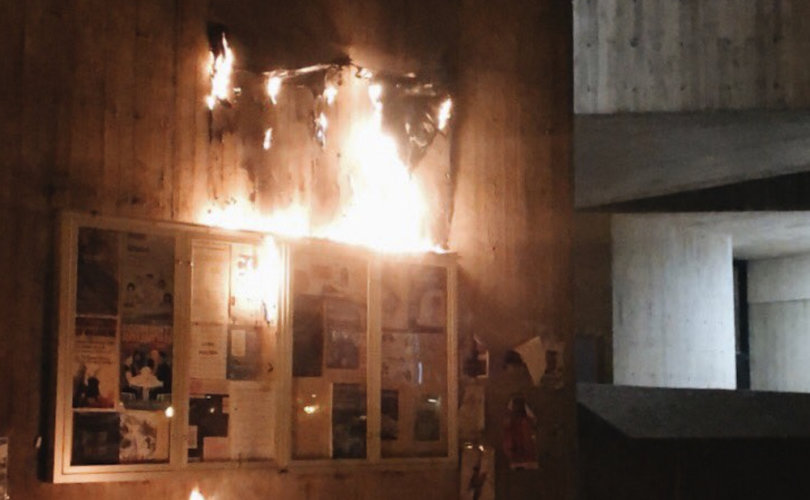 May 10, 2019 (LifeSiteNews) — Western Washington University police are investigating as arson a campus fire last weekend that burned a poster promoting a talk by the head of Students for Life of America.

Campus police for the Bellingham, Washington, university were notified late Saturday night, May 4, of an exterior fire at the Environmental Studies Building, KIRO-7 reported. Investigators said it appeared the poster attached for display on the building was deliberately set on fire.

“We are handling this fire as an arson,” said Darin Rasmussen, chief of university police. “Intentionally setting such a fire is foolish and dangerous. We are actively investigating and I hope we can find the person responsible for this crime.”

The roughly 6-foot by 3-foot poster advertised a May 9 talk with SFLA president Kristan Hawkins hosted by Western University Students for Life. The title of Hawkins’ talk was Lies Feminists Tell.

SFLA denounced the fire as an act of intimidation.

“We condemn the vandalism and the act of intimidation by the arsonist,” the pro-life group’s communications director, Matt Lamb, told LifeSiteNews.

SFLA often faces protests on college campuses, Lamb told the Herald, and some have been good examples of debate. With the threat in this case, he said extra security had been planned, including several police officers.

Even with the fire happening during the week leading up to Hawkins’ appearance, he said her speech was well received and well attended.

“The talk went well last night,” said Lamb. “The room reached capacity, so some people had to watch from an overflow room. There were at least 110 people there, and most likely more.”

Police arrived at the scene shortly after 11:30 p.m. Saturday. The blaze damaged the building's outer wall and caused approximately $500 worth of damage.

Photos of the fire appeared on social media, and Campus Reform posted before and after pictures in its report of the incident.

“The Western Washington University community values and embraces freedom of speech and the importance of diverse viewpoints,” Cocke said. “Universities should be places where issues of societal importance are discussed in a civil and respectful manner,”

Lamb told LifeSiteNews that Hawkins’ talk on Thursday night at the university focused on the lies of mainstream feminism, including that women need abortion to succeed.

“Kristan also talks about how the early feminists, like Susan B. Anthony, were pro-life,” he said.

University police are asking anyone with information about the fire or who may know who’s responsible to call 360-650-3555.