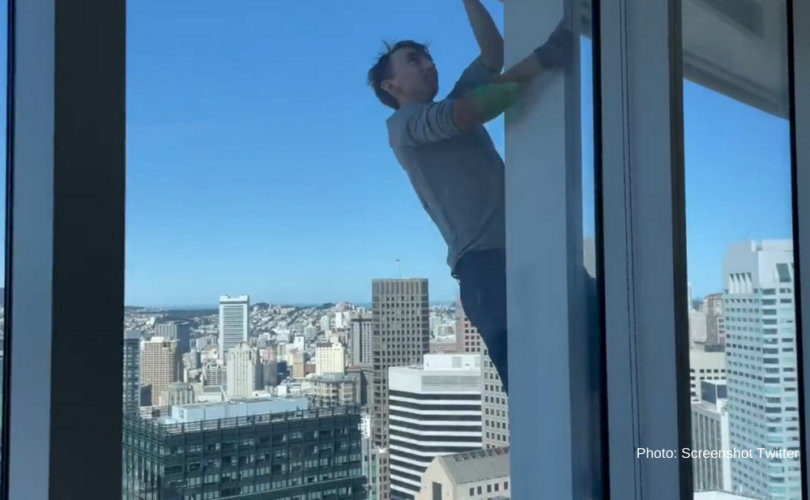 LOS ANGELES (LifeSiteNews) — The young man known as “Pro-Life Spiderman” has climbed yet another tall building in an effort to save an unborn child from abortion.

On Tuesday, 22-year-old pro-life activist Maison Des Champs scaled the luxury Ritz-Carlton hotel in downtown Los Angeles to raise money for a pregnant single mother considering an abortion because of financial difficulties and her boyfriend’s unwillingness to help rear the child.

In conjunction with the pro-life nonprofit Let Them Live, Des Champs is raising funds for the mother’s rent, car repair, and other expenses while she searches for a new job after losing her previous one.

“Let Them Live will ensure she not only receives financial help, but emotional and financial counseling and coaching as well so she can choose life and successfully get back on her feet,” he wrote in an Instagram post attached to a video he captured while up on the 54-story Ritz-Carlton.

According to the Los Angeles Times, Des Champs was arrested less than an hour after beginning to climb the 667-foot Ritz-Carlton Tuesday morning. He had also hung a banner that read “Support women, not abortion.”

The Los Angeles Police Department did not publicly release information on the charges Des Champs faces, though as he told LifeSiteNews editor-in-chief John-Henry Westen earlier this year, he manages to avoid jail time or other legal trouble.

In May the “Pro-Life Spiderman” climbed the tallest building in downtown San Francisco, the 60-story Salesforce Tower, and then in June he scaled the 845-foot Devon Tower in Oklahoma City, in both cases to raise money for women considering abortions as well.

Des Champs climbs skyscrapers without ropes or safety nets, using only his hands and feet.

“I grab the windowsills that stick out, or the decorative panels that stick out, but I have a background in rock climbing,” he told John-Henry Westen in June. “I’ve been climbing for about five years now … and it’s hard to convey to people who don’t rock climb that climbing skyscrapers is actually a lot easier than climbing rock.”