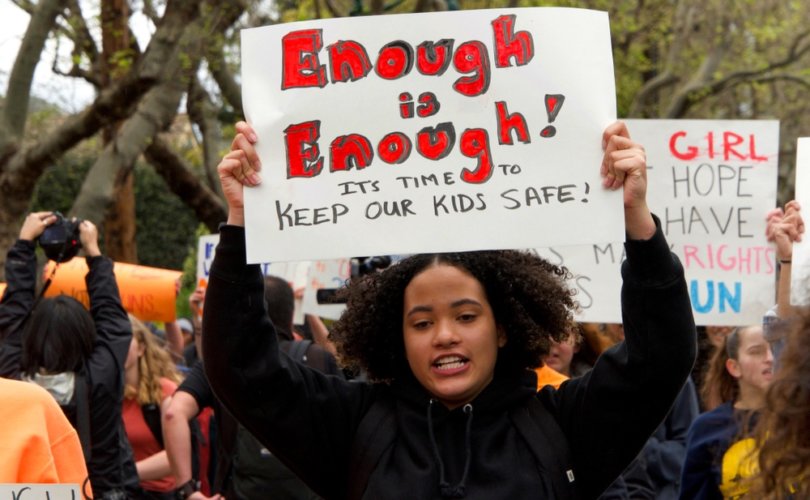 A student from Alameda High School in California participates in the March 14, 2018 student walkout to protest guns.Shutterstock.com

ROCKLIN, California, April 10, 2018 (LifeSiteNews) – Tomorrow, students from almost 200 high schools and more than 80 colleges across the United States will engage in a pro-life walkout to end abortion.

The National Pro-Life Walkout will consist of students walking out their classrooms on Wednesday, April 11 at 10:00 AM local time for seventeen minutes of silence and prayer. Organizers say it takes seventeen minutes for Planned Parenthood to abort ten children in a given day.

Rocklin High School student Brandon Gillespie of California is spearheading the event, with organizational support from Students for Life of America. Gillespie announced the walkout on March 22, to “honor all the lives of the millions of aborted babies every year,” and to raise awareness of the “cruel injustices taking place at Planned Parenthood.”

Students for Life of America President Kristan Hawkins said in a press release that more than 350 students or student groups nationwide have notified SFLA that they plan to participate.

Gillespie also hopes the event will serve a secondary function of exposing whether public schools hold pro-life activism to a different standard than other causes.

On March 14, another high school walkout took place to call for gun control in the wake of February’s mass shooting in Parkland, Florida. It also spanned seventeen minutes, to honor the number of people killed at Marjory Stoneman Douglas High School.

Gillespie’s history teacher, Julianne Benzel, found herself suspended for two days over a class discussion in which she raised the question of whether schools that allowed students to leave class for the gun walkout would show the same deference to walkouts on other issues, such as abortion.

That inspired Gillespie to put her thought experiment to the test. “I would like to see if there really is a double standard and what will come of that,” he said.

So far, his school district’s reaction is confirming their suspicions. A Rocklin Unified School District spokesperson told CNS News that while pro-life students will not face disciplinary action for participating, the school will not officially sanction the event because it isn’t “viewpoint neutral.”

By contrast, the district claimed that the gun walkout qualified as a “special event” because it was a “viewpoint neutral” “remembrance activity.” However, CNS News notes that the gun walkout did advocate specific policy viewpoints, such as support for banning high-capacity magazines and opposition to concealed carry reciprocity legislation.

Gillespie added that the school waited until the last minute to respond to his requests, and in the end denied him teacher flexibility in lesson planning and the use of school sound equipment. The school had previously granted both accommodations to the gun activists. “It just confirms for me that there is a political double standard, at least in my school district, but I’m still going to be out there,” he said.

On Monday, the Life Legal Defense Foundation sent a letter to Rocklin High School stating it was in violation of legal precedent against viewpoint discrimination, and warning that it would pursue legal action if the school attempted to enforce any double-standards against Gillespie.

It is “well settled that once a forum is opened for the expression of views, regardless of how unusual the forum, under the dual mandate of the first amendment and the equal protection clause neither the government nor any private censor may pick and choose between those views which may or may not be expressed,” the US First Circuit Court of Appeals ruled in 1973, as quoted by the letter.

“This is a blatant case of content discrimination and arbitrary favoritism,” Life Legal executive director Alexandra Snyder said. “Rocklin High School’s decision treats the Pro-life Walkout differently than the way the school treated the gun walkout, which violates the First Amendment and the Equal Protection rights of every student participating in the Pro-life walkout.”