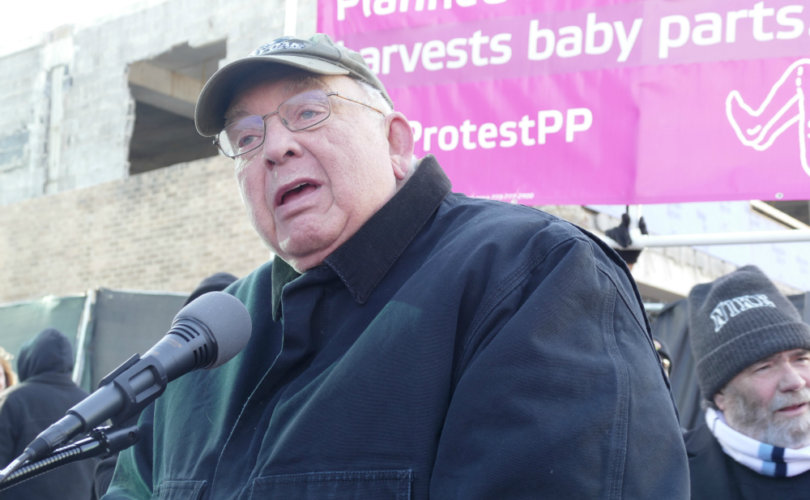 (LifeSiteNews) — James Sedlak, executive director of American Life League (ALL) and a towering figure in America’s pro-life movement, has passed away at age 78.

“In 1979, I read a book called the Tiniest Humans,” Sedlak once recounted. “It was just an absolutely compelling book about the humanity of the preborn child. And that’s what brought me into the pro-life movement.”

Sedlak didn’t just join the pro-life movement, he became one of the driving forces combating abortion throughout the world. According to ALL founder Judie Brown, Sedlak was the “#1 Enemy of Evil in America.”

“When I worked at Planned Parenthood, their greatest threat was one humble man named Jim Sedlak,” explained leading pro-life advocate and former Planned Parenthood clinic director, Abby Johnson. “They were terrified of him.”

“Jim Sedlak was a unique pro-life activist in many ways,” said LifeSiteNews’ Vice President, Gualberto Garcia Jones, who worked with Sedlak at American Life League’s Stafford, Virgina, office from 2004 to 2006. “He had spent a long career at IBM and carried that professionalism into his pro-life work. In fact, he was the closest thing to a human computer when it came to the encyclopedic knowledge of the criminal organization known as Planned Parenthood.”

Sedlak was a “cheerful and yet fearless person who had a relatively uncommon, in-depth understanding of the many issues and forces behind the death movement,” added LifeSiteNews cofounder Steve Jalsevac.

“He held strongly to basic moral principles and I never saw him compromise those principles in any way as too many have been tempted to do,” said Jalsevac. “I am really going to miss seeing his smiling face and encountering his upbeat presence.”

“Sedlak was passionate about stopping Planned Parenthood’s influence in school sex education programs, as well as ending their ability to root themselves into local communities,” wrote LiveAction’s Carole Novielli. “His goal was to initially stop Planned Parenthood in his own community, but as pro-lifers learned of his success, that mission quickly blossomed into a national — and eventually international — mission.”

“Despite his greater physical challenges in recent years, Jim’s commitment to the cause of pro-life, and his zeal for exposing the truth about Planned Parenthood, never weakened one bit,” said Fr. Frank Pavone, national director of Priests for Life.

“Jim was always a voice of experience, of faith, of prayer, and of leaving no unborn child behind,” continued Pavone. “This great movement will miss him, but will not stop learning from him.”

“From the very first moment I spoke to Jim in 1986 there was no doubt that he was an expert on the ways people in grassroots movements could be most effective in fighting Planned Parenthood,” wrote ALL founder and President Judie Brown in a moving testimony posted on Twitter.

“In fact, Jim spoke from experience, and he always knew exactly what to do to ruffle the culture of death’s feathers,” said Brown. “But in my mind, that was the least of what he did for the babies, for American Life League, and most importantly, for Our Lord.”

“Jim was a faithful Catholic who had an incredible devotion to the Blessed Mother. He taught everyone who met him the value of remaining close to Our Lady and her beloved Son, and he did this not with words, but with example,” wrote Brown. “I believe this is the single greatest reason why he was so effective in battling the Planned Parenthood poison in our midst.”

“Planned Parenthood feared Jim Sedlak — and with good reason,” she said. “Like St. Athanasius, Jim fought the good fight and defended truth at every turn. He did so with sincere conviction and a quiver full of facts, faith, and strength because he wore the armor of God without apology. He was one of the greatest soldiers in our fight.”

“We will miss Jim, and his absence leaves a hole in our hearts, but the lessons he taught us will live on, as will his memory in our hearts, in our work, and in our commitment to serve God first and foremost,” added Brown.

Sedlak joined the pro-life movement in 1980, according to an online tribute. His honors included the 1984 Dutchess County Right to Life’s Pro-Lifer of the Year Award, the 1987 Expectant Mother Care’s New York Pro-Life Champion Award, the 1987 Parent’s Roundtable’s Family Life Award, the 1988 American Life League’s Unsung Hero Award, and the 1993 Distinguished Service to Life Award from pro-lifers in Grand Haven.

In 1993, Jim was identified by Planned Parenthood Federation of America (PPFA) as one of the 15 “most active” fighters against Planned Parenthood sex education programs. In 1995, PPFA featured Jim in two segments of its anti-life film Unholy Alliance.

Sedlak is survived by his wife of 54 years, Michaeleen, their three grown children, and ten grandchildren.