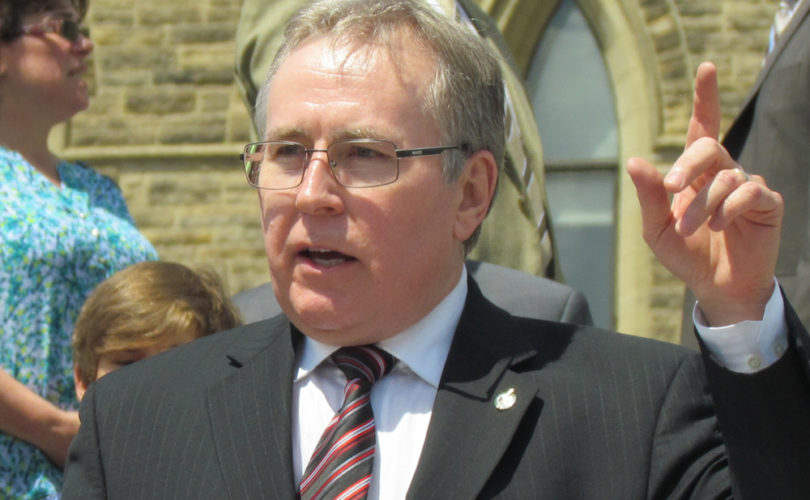 TORONTO, October 23, 2015 (LifeSiteNews) – With the defeat of Stephen Harper’s Conservative government October 19, the number of federal pro-life MPs fell to what appears to be an all-time low of 41 – or 12 percent of the 338-seat Parliament – but increased marginally within the reduced Conservative caucus itself.

The Conservative Party is now the only one of Canada’s three major parties in which citizens who believe human life is sacred from conception to natural death are allowed a political voice and home, points out Jack Fonseca of Campaign Life Coalition.

Liberal Prime Minister-elect Justin Trudeau’s “dictatorial edict” of May 2014 banned anyone with pro-life convictions from candidacy for the Liberal Party, and the NDP has been traditionally intolerant of those beliefs.

Of the 99 Conservatives who survived “what appears to have been an unstoppable Liberal tide” on Monday night, Fonseca said, 35 were incumbent pro-life MPs and six were first-time pro-life candidates.

Add to these 41 pro-life Tories another seven with “pro-life leanings,” and the number of pro-life MPs rises to 48 within the Conservative caucus.

There are also 19 Tory MPs whose pro-life views are “either ‘unknown’ or ‘educable’,” he told LifeSiteNews. “That means there’s hope, through education and personal rapport, to make them pro-life one day.”

“All is not lost,” Fonseca pointed out. “Our position in the Conservative caucus, which is the Official Opposition, has actually been marginally strengthened. So that assures us that there will be a strong pro-life voice in the House.”

At the same time, the pro-life movement undeniably suffered a political setback in this 2015 election that brought in 184-seat Liberal majority under leader Justin Trudeau.

There is Trudeau himself, whom Fonseca described as “a harbinger of death and moral disorder” and who will “very likely to push all these values of his that are destructive to society and individuals not to mention to religious liberty and individual freedom.”

And there is the loss of 23 pro-life MPs. “These are good men and women who voted the right way every time,” Fonseca noted, “and we won’t have those votes any longer.”

Among defeated pro-life Tories is Stephen Woodworth of Kitchener Center, an “outspoken sponsor of Motion 312,” noted Fonseca in his CLC election analysis. That motion to study “when human life begins created a national debate on abortion,” and thereby “helped many Canadians to think about human rights for pre-born children for the first time.”

“Several strong MPs will be sorely missed,” he said. “We thank them for their service in parliament.”

Fonseca attributes this to pro-life grassroots political mobilization. “We know that our voters are motivated, and that translates into action.”

The 29-year-old Nuttall won by a “mere 110 votes,” Fonseca said. “Certainly that’s a riding where pro-lifers tipped the balance in favor of the pro-life candidate.”

But in what has been billed as the tightest race of the election, the results went the other way, when pro-life Tory Lawrence Toet lost to Daniel Blaikie, son of former NDP MP Bill Blaikie, in Manitoba riding of Elmwood-Transcona, by just 51 votes.

The 2015 election also had highest voter turnout since 1993, with 68 percent of eligible voters heading to the polls, according to the Toronto Star.

Fonseca attributes this to Canadians’ widespread desire for a change from the Stephen Harper Conservatives, who have been in power since 2006.

“I think the mainstream media did a very good job of smearing Stephen Harper” as “an untrustworthy and perhaps even corrupt politician due to the year-long scrutiny on the Mike Duffy Senate scandal.”

That relentless media scrutiny “left a lasting impression on the voter’s minds right across the country,” Fonseca said. “My personal belief is that the anti-Harper, Trudeau-mania wave was simply too large and it overcame everything else.”

However, pro-lifers must continue the fight, Fonseca emphasized.

“Justice for the pre-born demands that we continue to stand up and demand legal rights for all children, including those in the womb,” he told LifeSiteNews, “and that we continue to defend the elderly, the sick and the disabled, who will be the primary targets of euthanasia and assisted suicide.”

Fonseca also pointed out that pro-life advocates must support pro-life MPs, and educate those who are not. He urged them to help CLC to “more aggressively” educate “the public at large” as well, particularly about the looming threat of legalized euthanasia and doctor-assisted suicide, which will come into effect February 2016.

Most Canadians are “largely oblivious” to “just how dangerous the euthanasia and assisted suicide regime would be.”

They are also “completely unaware” that the “so-called strict safeguards that the Supreme Court promised” when it struck down the prohibition against doctor-assisted suicide in February 2015, just “don’t exist,” he said.

Canada could quickly become like Belgium or the Netherlands “where people can get euthanasia because they’re depressed,” Fonseca said. “So it’s really important that pro-lifers more than ever, be our mouth and our hands and help us educate others in their community and in their neighborhood.”

Pro-life MPs defeated October 19, 2015, but thanked for their years of service: