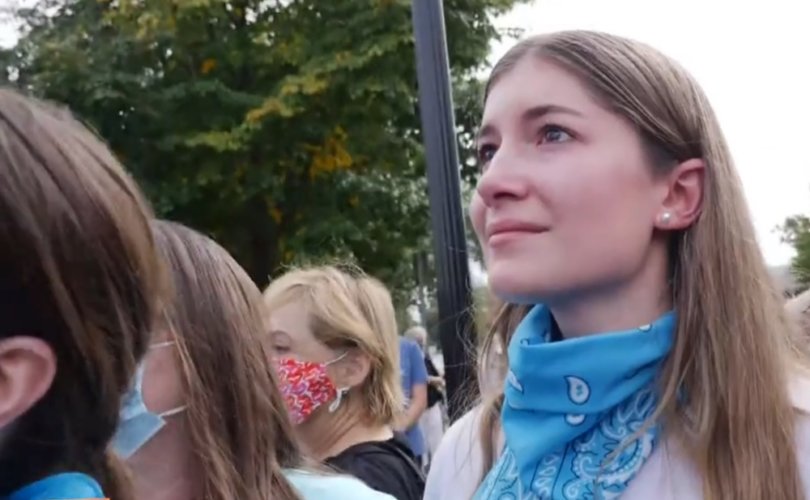 Autumn Schimmer moments after she was punched in the face outside the U.S. Supreme Court, Sept. 27, 2020, Washington, D.C.Breitbart / Video screen grab

WASHINGTON, D.C., September 29, 2020 (LifeSiteNews) — A young pro-life woman was punched in the face Sunday while witnessing to life outside the U.S. Supreme Court.

The incident took place at the “No Confirmation Until Inauguration” rally protesting President Donald Trump’s top court nominee Amy Coney Barrett, where abortion advocates made up the majority of the crowd, according to a Student for Life of America (SFLA) press release.

Twenty-three-year old Autumn Schimmer, SFLAction Communications and Market Manager, was standing holding a sign “I can’t believe these ‘feminists’ are protesting a woman,” when an abortion advocate came up to talk to her, and then punched her and pulled off her face mask.

Police were called and arrested a woman in connection with the incident, the SFLA  release stated.

Although the actual assault was not caught directly on camera, a Breitbart video [at about 1:01] of the protest shows a tearful and distraught Schimmer talking to reporters and police in the immediate aftermath.

“I work for Students for Life. I live in Chicago, I was just having a conversation with a pro-choice woman about what it means to be a feminist,” she told media.

“I told her all women have to be born in order for there to be feminism. If we want to advance this agenda, women’s empowerment is women being born. Women are not empowered from their children being killed,” related Schimmer, part of SFLA’s SCOTUS Squad.

“So the woman basically got mad at me that I didn’t answer one of her questions, hit me in the face and ran into the crowd to hide like a coward,” she said.

In the SFLA press release, Schimmer said that after she explained the pro-life view of feminism, the woman kept “getting more aggressive” and “I took a step back to return to my group.”

The woman then “approached me and punched me in the face and ripped off my face mask. This is very upsetting. Being attacked by a pro-choicer just shows that the violence of abortion breeds a culture of violence and normalizes it.”

Demand Justice, Planned Parenthood Action, Sunrise Movement, and March for Our Lives were among the groups organizing Sunday’s protest

Headquartered in Fredericksburg, Virginia, SFLA is the largest, pro-life, youth organization in the United States, and SFLA president Kristan Hawkins joined other pro-life leaders Saturday to praise Trump’s pick of Coney Barrett for the top court.

Hawkins promised that “our team will mobilize across the country for this qualified jurist who deserves to be heard,” and that SFLA will be out in front of the Supreme Court.

“On the 100th anniversary of women’s right to vote found in the 19th Amendment, Judge Barrett’s nomination to the Supreme Court is a fitting tribute to how far we as women have come,” Hawkins said in the SFLA press release.

“This is the opportunity of a lifetime that will determine millions of lifetimes. It’s go time, Pro-Life Generation: Get ready for a Post-Roe America.”