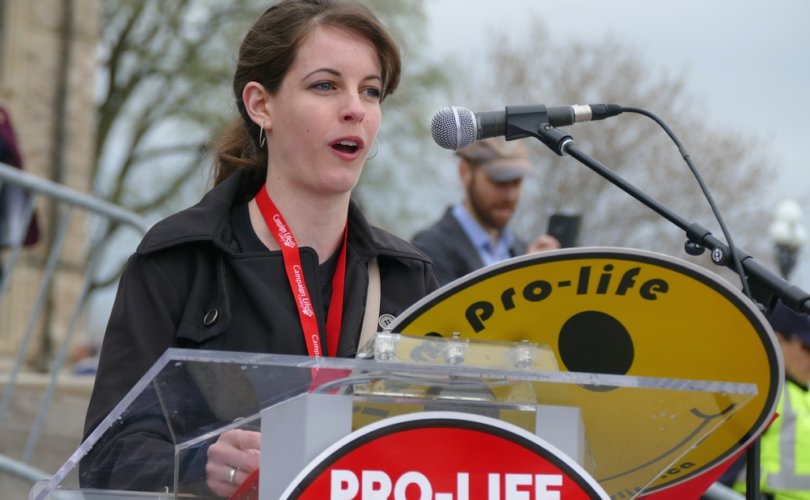 OTTAWA, May 10, 2018 (LifeSiteNews) – Campaign Life Coalition Youth Coordinator Marie-Claire Bissonnette used her speaking slot at the Canadian March for Life to highlight the rise of chemical abortions, and the challenge the trend poses to protecting preborn babies from being killed.

“In Canada and all around the world, abortion technology is changing. It’s becoming more convenient,” Bissonnette said. Rather than surgical methods that evoke violence by merely describing them, “what’s in style now is to kill our preborn through pills, with chemicals, with the contraceptive pill, or the Plan B pill that makes our uterine wall an inhospitable environment in which it’s impossible for your baby to implant.”

“You can also kill your child with a new form of abortion called Mifegymiso, by starving your baby to death,” she added. Mifegymiso, another name for the abortion pill RU-486, was legalized in Canada last year for up to nine weeks in pregnancy, and pro-abortion activists are lobbying to make it free. Bissonnette noted that the drug has been “administered over 4,000 times in 2017 alone,” in Canada, and that in Scotland, it now accounts for 83 percent of all abortions.

This, she says, will make abortion seem “much less bloody and unsightly,” undermining the persuasive force of pro-life appeals to the violent nature of surgical abortions and the recognizable features of more developed babies. “Our work as pro-lifers will be made more difficult,” she warned.

But Bissonnette offered a solution, which was to go back to first principles and remember that the ugly imagery or additional cruelty of particular methods are ultimately tangential to the central injustice of abortion.

“What makes abortion intrinsically evil is not the amount of blood, and it’s not the pain it causes. It is the intentional killing of an innocent human life, no matter how long,” she told the crowd. “Our goal is not toward cleaning up the blood or anesthetizing the pain; pro-aborts have done that for us. The result is no less appalling than torn-apart babies thrown into dumpsters or sold for money.”

Bissonnette concluded her remarks with a stirring call to action.

“Let us rise to this challenge with renewed conviction,” she said. “Let us focus on ending all abortions, not just the unsightly ones, not just the bloody and painful ones.”