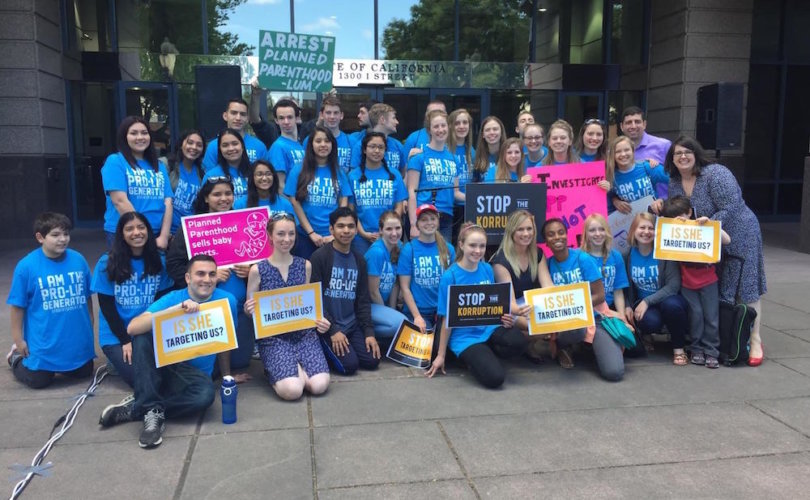 SACRAMENTO, California, April 14, 2016 (LifeSiteNews) – Pro-life youth with Students for Life of America rallied outside the office of California Attorney General Kamala Harris Wednesday, calling on her to resign following her raid targeting David Daleiden after he caught Planned Parenthood on video discussing the illegal harvesting and sale of aborted baby body parts.

Harris is running for U.S. Senate and is soliciting signatures through her campaign website for a petition in support of Planned Parenthood.

“Kamala Harris is supposed to be the person we trust to go after criminals, but instead she targets an innocent law abiding citizen,” Veronica Fealy, president of the youth pro-life group Shield for the Unborn, said at the rally. “Instead of acknowledging evidence against Planned Parenthood, and investigating them, she tries to silence and intimidate the messenger. However, everyone here today stands with David and we will not be silenced. We will be louder than we’ve ever been.”

California Assemblywoman Shannon Grove joined the rally, as did Jonathan Keller of the California Family Council, Wynette Sills of 40 Days for Life Sacramento, James Conrad of Survivors of the Abortion Holocaust, and numerous local pro-life activists.

Kristan Hawkins, president of Students for Life of America, said, “I was proud to stand with the pro-life generation today and call for the resignation of California Attorney General Kamala Harris, a corrupt politician bought and paid for by Planned Parenthood and their allies….who is next? What group or individual will she exact political revenge upon next? This is exactly the kind of corrupt behavior from politicians Americans are fed up with. It’s time for AG Harris to resign.”

Watch a clip of the rally, courtesy of Students for Life of America: