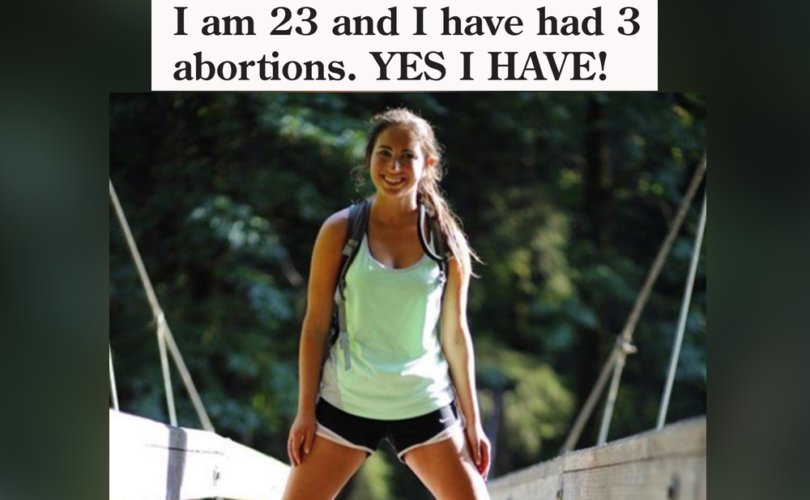 September 4, 2018 (LifeSiteNews) – The pro-abortion “Shout Your Abortion” campaign is under fire for using a photo of a pro-life woman without her consent for a piece in which a different young woman takes pride in having had three abortions by age 23.

As covered last week by LifeSiteNews, the original essay was titled “I am 23 and I have had 3 abortions. YES I HAVE!” and appeared under the name “Heather.” The author details having two abortions after casual sexual encounters in which she used no birth control whatsoever, and a third after her birth control pill failed and she ultimately decided to abort because pregnancy would interfere with a summer job at a national park.

“I am 23, I have a good life, I don’t want to destroy it because of a bunch of children that I am not ready for. Doesn’t that make sense? I have ZERO regrets on what I have,” the author writes, wishing that abortion was seen as “just another surgery.”

“Heather’s” essay was picked up on multiple websites and received widespread condemnation in pro-life and conservative circles.

24-year-old Molly Schaap subsequently reached out to LifeSiteNews and other pro-life outlets to declare that she was actually the woman in the header image … but she was pro-life, had never had an abortion, and did not give Shout Your Abortion permission to use her photo.

“I was horrified to wake up yesterday and learn that a photo of me was stolen and used without my permission or knowledge,” Shaap wrote, noting that “Heather” says “she is proud of who she is and her actions, yet she used a picture of a random stranger instead of herself.”

“All of my life, I have been pro-life and believe that life begins at conception,” Schaap declared. “I have personally donated to pro-life causes and believe that every life is valuable. As a Christian, I believe that God is the author of life, and life is not ours to take away.”

At the same time, Schaap said her image being linked to hostile comments directed at “Heather” have inspired an empathetic connection with the author.

“While I strongly believe that abortion is taking a valued life, I would like to ask people to think about the effect that their words have and to choose their words carefully,” she implored her fellow pro-lifers. “If Heather really exists, I want her to know that she has value and is loved despite the unfortunate life choices she has made. The Bible clearly teaches that God is a forgiving God.”

The pro-life Human Defense Initiative says Shout Your Abortion did not respond to a request for comment on the incident. The essay no longer appears at its original address at the pro-abortion group’s website.

Schaap told Gateway Pundit that she is currently undecided as to whether she wants to pursue legal action against Shout Your Abortion. “I am a teacher currently trying to get ready for the school year, so that is something I would like to think more about over the next couple days,” she said.

Shout Your Abortion was founded in 2015 on the premise that pro-life sentiments are rooted in widespread ignorance of the experiences and perspectives of women who have abortions, and that publicizing “positive” abortion stories would be the key to ending the debate.

In fact, similar pro-abortion projects have been attempted for years with little impact on majority opposition to most abortions. Pro-lifers say that living preborn humans are the party really being ignored in the abortion debate.

Pro-lifers, meanwhile, have collected the personal stories of women who regret their abortions, via groups such as LifeSiteNews, Silent No More, Rachel’s Vineyard, After Abortion, and Abortion Recovery International. Abortion advocates often deride abortion regret as a myth.