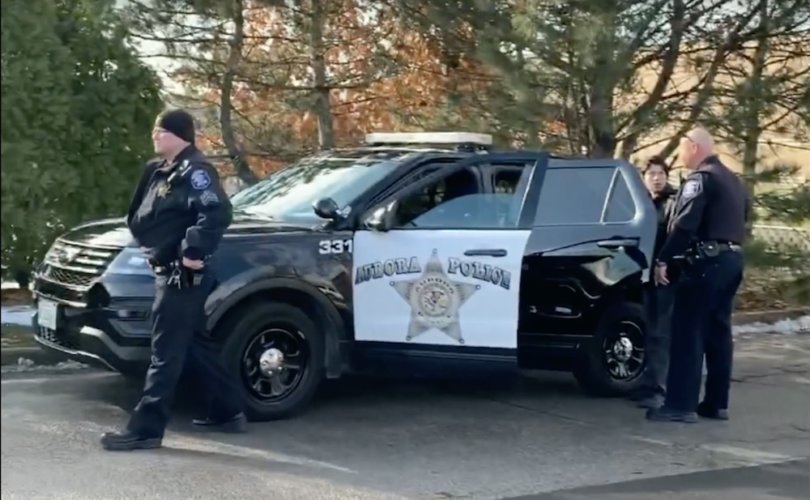 UPDATE, November 21, 2019: This report has been updated to include feedback from Pro-Life Action League executive director Eric Scheidler, who provided details about the legal background that differ from the initial account of Operation Save Chicago.

AURORA, Illinois, November 20, 2019 (LifeSiteNews) – Police officers arrested an Illinois pro-life activist over the weekend for standing in the entrance to a Planned Parenthood parking lot, with video showing the officers refusing to explain to his fellow sidewalk counselors what exactly the offense was.

A video uploaded by a local pro-life activist and shared by the group Operation Save Chicago  shows the incident from across the street. Two police officers can been seen approaching the group’s director, Mario Navarro, and while their exchange is not audible they soon arrest him and put him in a squad car.

Several pro-lifers can be heard raising objections, with one noting that Navarro “moves every time a car comes, we’re not blocking people from coming in.” As Navarro is taken away, the pro-lifers express disgust and repeatedly ask the officers to explain, to no avail.

“Is it unreasonable to ask you to cite the law that your job is to enforce?” one asked. “Officers, if you don’t inform us what law he broke, we’re all gonna go stand on that side of the road,” another declared, with no response.

At one point, one of the officers tells the crowd simply, “I’m not gonna debate this with you,” and that Navarro “was told what he did.”

Another pro-lifer, who mentions having been a retired police officer, advises Navarro to cooperate with the arrest and then beat the charge in court.

“There is a public easement which was decided in federal court to be accessible to sidewalk councilors,” Navarro told LifeSiteNews via email. “Part of that agreement was that those standing there would not be arrested for doing so. The citation after the arrest was for disobeying a lawful order of a police officer, however that order was in violation of a federal court decision.”

Following LifeSiteNews’ initial report, Pro-Life Action League executive director Eric Scheidler reached out to LifeSiteNews to explain that the “public easement” is in fact a private road, and that the permissibility of standing specifically in the driveway is ambiguous, even if a pro-lifer steps aside for cars.

A 2007 Settlement Agreement over which federal district court Judge Virginia Kendall presided established that police cannot arrest pro-lifers for “trespassing” without authority from all the property owners, but can issue citations. Planned Parenthood has authorized police to arrest pro-lifers, but the owners of another property sharing the parking lot, Waterleaf Women's Center, has expressly welcomed sidewalk counselors. (Whether it specifically requires all five property owners to authorize arrests has not been adjudicated.)

While pro-lifers’ right to peacefully protest abortion and offer help to pregnant women is at risk in various parts of the country, Scheidler says he wants to reassure area pro-lifers who might be discouraged from praying outside the Aurora Planned Parenthood by fear of arrest. “I have always instructed those affiliated with [Families Against Planned Parenthood] to stay on the other side of that roadway, and only cross over briefly to better reach out to PP clients, and then return to the ‘safe’ side of the road,” he adds.

In any event, the Aurora Planned Parenthood facility has given pro-lifers ample cause to speak out. In August, Operation Rescue reported that 911 call records show that a worker at the facility called to request an ambulance for a suicidal girl, but refused to give the dispatcher details about her and said Planned Parenthood was “not disclosing anything to her parents.”