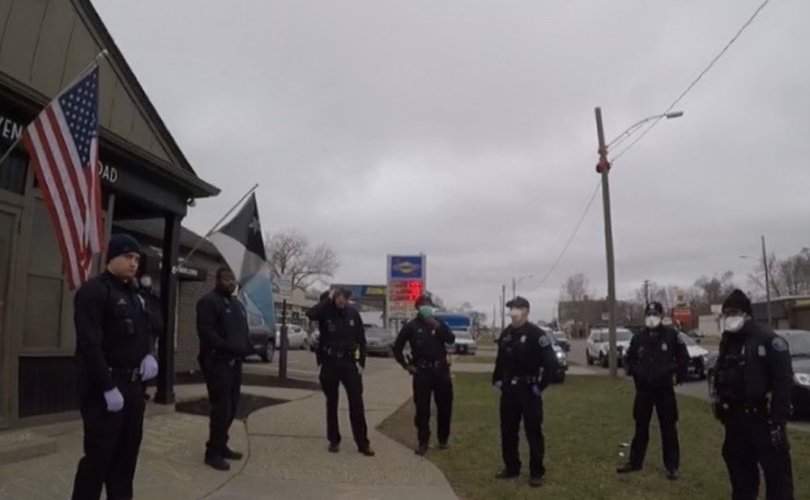 Whitmer, a first-term governor who has ardently defended abortion in the past, is currently under consideration as a possible vice presidential running mate for presumptive Democratic nominee Joe Biden. In recent weeks, she has had several public spats with President Donald Trump over her handling of the coronavirus outbreak.

In a press release issued yesterday, the AFLC announced that it is filing a lawsuit against Whitmer as well as the City of Detroit on behalf of Andrew Belanger, Justin Phillips, and Cal Zastrow, three pro-life Christians who, thanks to ambiguities in Whitmer’s executive order, have had their right to free speech unduly curtailed.

“Defendants have deprived Plaintiffs of their right to freedom of speech in violation of the Free Speech Clause of the First Amendment as applied to the states and their political subdivisions under the Fourteenth Amendment to the United States Constitution,” the statement reads.

“Defendants’ actions, as set forth in this Complaint, injured Plaintiffs in a way likely to chill a person of ordinary firmness from further participation in expressive religious activity.”

The lawsuit is a result of an incident that took place outside Scotsdale Women’s Center on Tuesday, March 31.

According to the AFLC — a self-described “Judeo-Christian law firm that fights for faith and freedom through litigation, education, and public policy initiatives” — Belanger was peacefully expressing his deeply-held religious opposition to abortion when an inordinate number of police officers showed up and issued him a criminal citation for supposedly violating the governor’s lockdown order.

“He was preaching, holding a pro-life sign, and practicing social distancing,” the AFLC’s statement reads. “In fact, he and his fellow pro-lifers are adhering to the social distancing measures recommended by the Centers for Disease Control and Prevention, specifically including remaining at least six feet from people on the public sidewalks when engaging in their expressive pro-life activities.”

“While Belanger was exercising his First Amendment rights, eight City of Detroit police vehicles and fifteen City police officers arrived. Belanger was the only pro-lifer engaging in expressive activity at the time of their arrival.”

The AFLC contends that Belanger, who is now facing a criminal trial for the apparent violation, and his associates have the right to express their beliefs on public sidewalks.

“The scope of our lawsuit and request for a restraining order are narrow. We do not advance a general challenge to the constitutionality of the Governor’s Executive Order, nor do we seek to halt its enforcement outside of the very limited and narrow scope of our challenge,” the group has said.

“We only seek to prohibit the use of the Executive Order to criminalize our clients’ peaceful, free speech activity on the public sidewalks outside of abortion centers throughout Michigan.”

Since receiving his citation, Belanger and his fellow activists have continued to appear outside the abortion clinic and will continue to do so.

Interestingly, pro-life activists who reside on the west side of Michigan have not had problems with law enforcement.

Leisa Snow, a long-time anti-abortion activist who regularly stands on the sidewalk outside Heritage Clinic for Women in Grand Rapids, told LifeSiteNews that the police there have been “very respectful.” The few times police have shown up, she said, they’ve only requested that the sidewalk not be blocked.

After COVID-19 spread to the United States from China several weeks ago, liberal activists began lobbying lawmakers and filing lawsuits to ensure that the killing of unborn babies continues without interruption. Their efforts have been somewhat though not entirely successful.

In recent weeks, pro-lifers across the country, most recently in Michigan and Illinois, have been ratcheting up pressure on their state’s Democratic governors to consider making abortion a “non-essential” medical procedure during the coronavirus outbreak.

On Monday this week, seven pro-lifers in North Carolina were arrested for also having allegedly violated their state’s stay-at-home order as they stood outside A Woman’s Choice abortion mill in Greensboro.