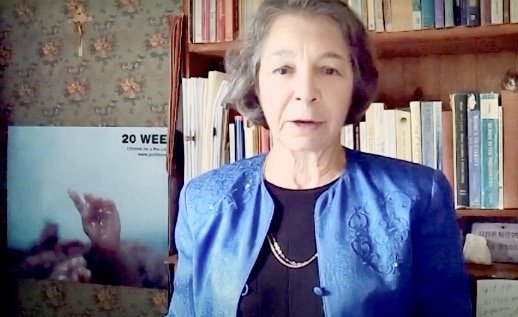 Dr. Monica Migliorino Miller is with Citizens for a Pro-Life Society, one of the groups that sponsored an ad that will appear in publications.

September 22, 2020 (LifeSiteNews) – A coalition of several dozen pro-life leaders and scholars have sent an open letter to the bishops of the United States asking them to speak out on Democratic presidential candidate Joe Biden’s pro-abortion stance that is contrary to Catholic teaching.

“In the weeks leading to the November election we respectfully and prayerfully ask that you will issue a formal statement to your flock clarifying that Biden’s support for a law that has sent over 60 million human beings to their deaths directly violates Catholic teaching,” the open letter states.

The letter was sent to every diocesan bishop in the nation via certified mail. The open letter appeared as an ad in the print edition of the Washington Examiner today. Similar ads are also released on Facebook as well as in a few days on the website of the Washington Examiner, and the print edition of the National Catholic Register, which is owned by EWTN.

A video version of the letter has been published on YouTube:

Among the signers of the open letter are Dr. Monica Migliorino Miller, whose group Citizens for a Pro-Life Society sponsored the ad, Mark Harrington of Created Equal, and Judie Brown of the American Life League.

Apart from other pro-life leaders like LifeSite’s John-Henry Westen and Fr. Frank Pavone of Priests for Life, some of the signers are intellectuals and scholars. Robert P. George of Princeton University and Peter Kreeft of Boston College are among them.

“Sadly, the Democratic candidate running for president, Joseph Biden, who claims to be a practicing Catholic, supports abortion on demand for the full nine months of pregnancy and has promised, should he win office, to ‘codify Roe v. Wade.’ In addition Biden will require that the American taxpayer fund abortion procedures,” they wrote.

“Biden’s support for the legalized killing of the unborn is a grave scandal to those within the Church – and to those outside the Church as well!”

The signers of the letter are not only concerned with the lives of many unborn babies, which would be in peril should Biden be elected President. They also focus on Biden’s immortal soul, which “is left in peril” whenever “those who have the authority to admonish such a public figure fail to do so.”

“We are asking that you speak out, as pastors of Christ’s flock, as a successor of the Apostles, to please use your authority and provide guidance to those under your care,” the open letter stated. “We ask that you specifically point out that in so serious a matter as the God-given right-to-life, Biden stands for and promotes a public policy diametrically opposed to the Catholic Church’s social justice teachings.”

“Every Catholic, every Christian; indeed every person of good will needs to first consider whether a candidate supports or opposes the right-to-life when deciding for whom to vote,” the signers emphasize.

According to the document, “The threat of abortion remains our preeminent priority because it directly attacks life itself, because it takes place within the sanctuary of the family, and because of the number of lives destroyed.”

“Our efforts to protect the unborn remain as important as ever, for just as the Supreme Court may allow greater latitude for state laws restricting abortion, state legislators have passed statutes not only keeping abortion legal through all nine months of pregnancy but opening the door to infanticide. Additionally, abortion contaminates many other important issues by being inserted into legislation regarding immigration, care for the poor, and health care reform.”

In the 1998 document “Living the Gospel of Life,” the bishops also described the right to life as “the most fundamental human good and the condition for all others.”

The open letter refers to a passage stating that for a politician to be right on issues like “racism, poverty, hunger, employment, education, housing, and health care” is never an excuse for “a wrong choice regarding direct attacks on innocent human life. Indeed, the failure to protect and defend life in its most vulnerable stages renders suspect any claims to the ‘rightness’ of positions in other matters affecting the poorest and least powerful of the human community.”

“If we understand the human person as the ‘temple of the Holy Spirit’ the living house of God then these latter issues fall logically into place as the crossbeams and walls of that house,” the bishops argued in the same document.

“All direct attacks on innocent human life, such as abortion and euthanasia, strike at the house’s foundation. These directly and immediately violate the human person’s most fundamental right to life. Neglect of these issues is the equivalent of building our house on sand. Such attacks cannot help but lull the social conscience in ways ultimately destructive of other human rights.”

Given the general principles laid out by the bishops in those two documents, the signers of the open letter ask them to call out Biden for directly violating these teachings. Biden is a baptized Catholic and has released ads saying he goes to Mass and prays the rosary.

“The unborn are the most oppressed group in America,” the open letter pointed out. “Their oppression should shake us to the core of our souls as only these totally innocent persons are subjected to violent extermination sanctioned by law. Thus the protection of the unborn remains the most urgent of all social justice issues. It is incumbent on the shepherds of Christ’s flock to guide the conscience of the Catholic voter to first take the injustice of abortion into account when selecting public officials.”