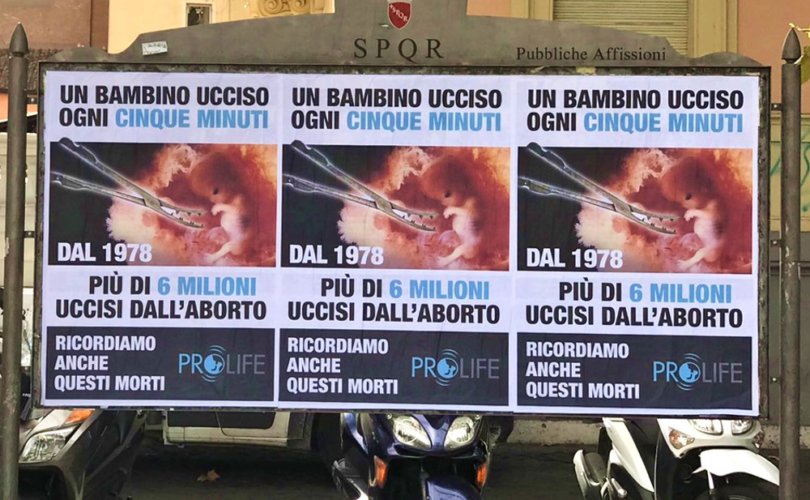 State the posters: 'One child killed every five minutes. Since 1978 more than six million killed by abortion. Let us also remember these dead.'

ROME, November 20, 2017 (LifeSiteNews) – The Eternal City was covered with thousands of posters on Saturday, as an unknown group of pro-life activists sought to reawaken Romans to the evil of abortion, nearly 40 years after it was legalized in Italy.

“One child killed every five minutes. Since 1978 more than six million killed by abortion. Let us also remember these dead,” the posters stated. Pictured with these solemn words was the image of a baby in the womb pursued by an instrument commonly used to dismember an unborn child during an abortion.

According to Italian media, it is unknown who printed the posters and who put them up around Rome.

“What’s striking,” Italian journalist Marco Tosatti wrote on Saturday, “is that this protest against legal abortion appeared as ProVita Onlus was awaiting authorization from Roman authorities to put up its own posters against abortion, although they were different from the ones that appeared.”

Pro-Vita Onlus is the Italian pro-life organization responsible for the publicity truck honoring Italian Cardinal Carlo Caffarra, that was stopped by Italian police as it circled the Vatican.

“The message is certainly strong but it represents the pure truth,” Toni Brandi, president of ProVita Onlus, said of the posters protesting abortion.

“We encourage the poster authors to continue the good fight. We certainly endorse this initiative aimed at raising public awareness about what abortion really is: the massive killing of innocent children in the womb, with horrible instruments of death,” he said.

Brandi continued: “We learned about these posters right when we were waiting on Roman city authorities to put up our own posters, which were also about abortion. Yet after our request on October 30, city authorities are pretending like nothing happened, and they don’t seem willing to put them up.”

“Are we perhaps facing yet another violation of the freedom of expression? Is the city’s billboard office being permitted to inspect and criticize the content of ‘unwanted posters’? Given the inaction and the delay, it is fair to think so,” he said.