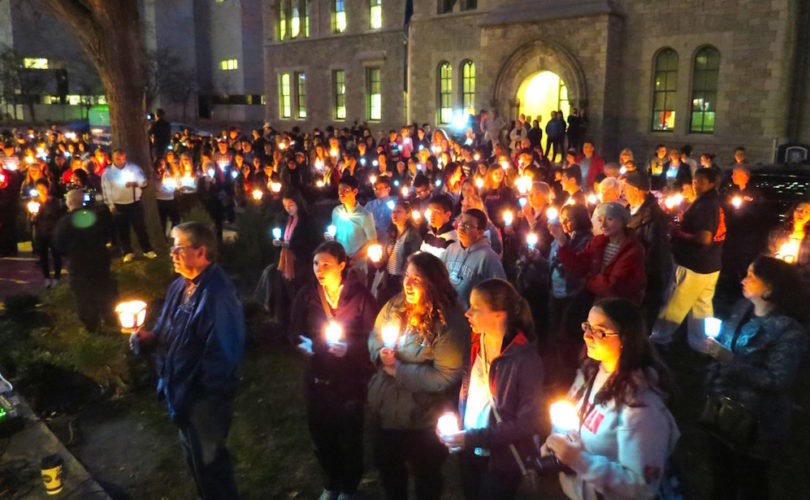 Pro-life citizens gather for a candlelight vigil the night before the 2013 March for Life.John-Henry Westen / LifeSiteNews

April 27, 2016 (LifeSiteNews) — Alliance for Life Ontario and Campaign Life Coalition have called for a day of fasting and prayer on May 2 as the threat of legalized euthanasia in Canada looms.

“If we're going to succeed we have to begin with prayer and fasting, against euthanasia, against all the other evils we face and the attacks on the sanctity of human life,” said Mary Ellen Douglas of Campaign Life Coalition.

“There are certain things we’ve been told as Christians that only get beaten when we fast and pray,” Jakki Jeffs, executive director for Alliance for Life Ontario, told LifeSiteNews.

“Encourage everyone, wherever they are, at home, at work, walking down the street, driving, to pray for the intentions that we have there,” said Jeffs, “that this government will just realize that it is minuscule compared to the Creator of Life, that it has no right, absolutely no right, no power from anywhere on earth or heaven to devalue human life.”

“Jesus is in the boat with us,” she added, “but we still have to trust and just keep fighting against this whole massive juggernaut against life.”

Christians, pro-lifers and people of good will are urged to fast and pray that “Canadians wake up to the reality of euthanasia and assisted suicide in Canada and reject them,” that “the body of Christ in Canada continue to speak out,” and that “health care professionals have the courage to say no to killing.”

They are asked to pray and fast that Canada’s Liberal government invoke the “notwithstanding clause” to put a five-year freeze on the Supreme Court’s February 2015 Carter decision that struck down the current law against euthanasia and assisted suicide as unconstitutional.

And they are urged to pray and fast that MPs “use their power to defeat Bill C-14.”

May 2 is significant because MPs will return to the House after a week-long break to continue second reading debate of the bill.

The Liberals’ draft legislation has been slammed by both pro- and anti-euthanasia advocates as well as MPs and senators across the political spectrum for being either too broad or too narrow.

But legislators are racing to pass legislation by June 6, when the Supreme Court’s ruling takes effect and the current law is void.

May 2 is also the deadline for members of the public to submit briefs on the bill to the House of Commons standing committee on justice and human rights, which will begin pre-studying the legislation.

“Any briefs to the Committee must be a written submission of no more than three (3) pages (approximately 750 words) on this subject and received no later than Monday May 2, 2016 at 5pm,” the committee’s website says.

“Submissions must confine themselves to any proposed recommendations for changes to the text of Bill C-14. All briefs will be submitted to the Committee once translated. Please note also that your brief may be posted on-line at a later date.”

2. Bill C-14 allows nurse practitioners to approve of euthanasia or assisted suicide. All other jurisdictions limit approvals to doctors.

3. Bill C-14 does not provide effective oversight of the law. This issue concerns life and death, this bill allows a medical or nurse practitioner who approves the death, to all be the person who carries-out the death, to also be the person who reports the death. This is a self-reporting system that protects persons who do the act. People do not self-report abuse of the law. There needs to be third-party, preferably the court to provide effective oversight of the law.

4. Bill C-14 provides legal immunity to: any person who does anything for the purpose of aiding a medical practitioner or nurse practitioner to provide a person with medical assistance in dying. The bill provides a perfect cover for acts of murder.

There are many more illusions of safeguards in the bill such as: the bill requires a medical or nurse practitioner to: be satisfied that the request was signed and dated by the person—or by another person under subsection (4). To be satisfied does not protect anyone.

6. The bill does not require the person to be terminally ill. The bill says: their natural death has become reasonably foreseeable, taking into account all of their medical circumstances, without a prognosis necessarily having been made as to the specific length of time that they have remaining. This is meaningless double speak. How would it be determined that death has become reasonably foreseeable?

7. The bill provides no conscience protection for healthcare professionals. Further to that, the bill requires medical or nurse practitioners to provide the “designated recipient” or the Minister of Health with every request for euthanasia or assisted suicide.

We are fully aware that the Supreme Court struck down Canada's assisted suicide law, but Bill C-14 does not provide effective oversight of the law, the bill enables anyone to directly participate in the act, the bill provides an illusion of safeguards and the bill does not provide conscience protection for medical professionals. The details in this bill are dangerous for Canadians in their time of need.