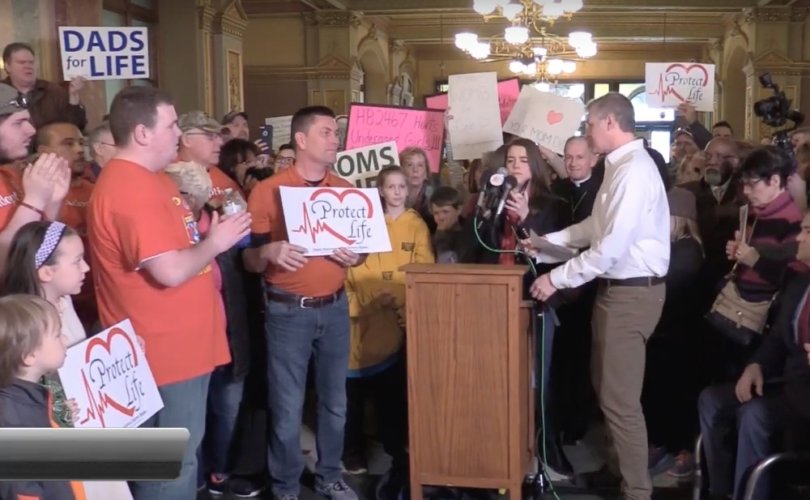 Update March 23, 9:05 PM: This report has been updated to replace an erroneous reference to the previous governor of Illinois with the current governor.

SPRINGFIELD, Illinois, March 22, 2019 (LifeSiteNews) – Enough pro-lifers gathered in Springfield, Illinois to fill the state capitol to capacity Wednesday to protest legislation that would further deregulate abortion in the left-wing state.

Illinois lawmakers are currently considering their own Reproductive Health Act (RHA), which like similar bills in other states would codify a “fundamental right” to abortion, establish “that a fertilized egg, embryo, or fetus does not have independent rights under the law,” and repeal numerous restrictions and regulations on abortion including the ban on late-term abortion. The Senate version, which cleared a committee vote Tuesday, also repeals the state’s parental notification requirement, the State Journal-Register reported.

“At its most basic level,” the bill simply “makes it clear that this is a healthcare procedure,” Democrat state Rep. Kelly Cassidy claimed, declaring that she trusts women and doctors and considers it “somewhat ridiculous” to have abortion in the state’s criminal code. But pro-lifers are assailing the proposal for going much further.

“When you dig into the weeds of this bill it is absolutely an extreme overreach,” Republican state Rep. Avery Bourne argued. “It really is something to give away money, and really business, to the abortion industry. This is not about the mothers. This is not about the babies.” Republican state Rep. Terri Bryant vowed to fight against the RHA “for every minute that there’s a possibility that it might move.”

Illinois pro-lifers made their opposition known Wednesday as thousands of people came to the capitol to protest the legislation, bused in from across the state for a rally organized by Illinois Right to Life Action, the Pro-Life Action League, the Illinois Family Institute, and Students for Life. An estimated 4,000 pro-lifers “filled the State Capitol to capacity.”

Between the pro-lifers, a separate gun-control rally, and ordinary capitol workers and visitors, Capitol Police temporarily closed down the building, something they’ve done just five times in the past 10 years.

The measures have a strong chance of passing the Democrat-controlled Illinois legislature. If it does, it’s likely to be signed into law by Democrat Gov. J.B. Pritzker, who vowed in January to make Illinois “the most progressive state in the nation when it comes to guaranteeing women’s reproductive rights” while signing an executive order to preserve abortion coverage in taxpayer-funded health insurance plans for state employees.