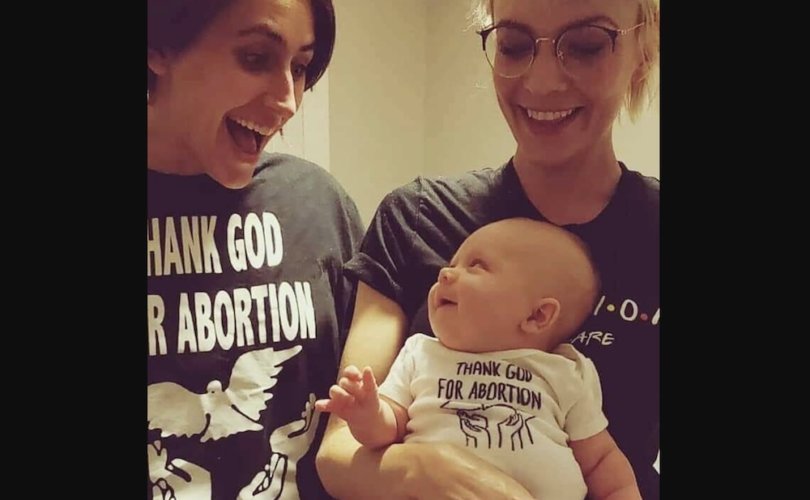 November 15, 2019 (LifeSiteNews) – While more mainstream abortion defenders try to frame abortion as a tragic necessity and insist nobody who “needs” the practice view it lightly, less PR-concerned activists often complicate the message by openly celebrating abortion, such as with a series of “Thank God for Abortion” photos that went viral this month.

ThankGodForAbortion.com sells shirts bearing the titular message, for the stated purpose of “inhabiting a joyful and authentic place in regards to our own experience with abortion,” which they hope will “eliminate the criminalizing stigma around abortion one t-shirt at a time.” The group’s Instagram page collects numerous photos of supporters wearing their shirts, including one that drew attention for featuring a lesbian couple that put one of the pro-abortion garments on a baby:

Just when you think #Prochoice can't become any more sadistic, they dress a little baby in a pre-debate baby gro.
If this is #feminism I want no part of it. Sickening pic.twitter.com/xqI2bMTPQO

“Hey baby! Don’t you look sweet in this pro-abortion onesie! Your life was worthless just a month or two ago!” pro-life ChoiceForTwo founder and director Laura Klassen commented on Facebook, summarizing the logic on display. Many pro-lifers were similarly disgusted:

I have seen a lot ugly things in my life but the mother-baby pictures being used by the so called “thank god for abortion” campaign are some of the most hideous images I have ever seen… pic.twitter.com/RFonsc3b6H

Child abuse wrapped in a smile

One thing is certain: The “Thank God for Abortion” campaign is not of the one true God, but rather of the god of this age, the Devil. Those who try to make murder of babies in the womb a holy thing are under the influence of Satan.#THANKGODFORABORTIONhttps://t.co/YMRqn7KX6c pic.twitter.com/vCJzBI0Hln

“Thank God for Abortion” is part of a wave of projects like “Shout Your Abortion” that are rooted in the theory that “positive” abortion narratives are the key to solidifying public opinion, by emphasizing abortion’s supposed beneficiaries and pushing back against any suggestion that the practice is less than wholesome. They have had little impact on majority opposition to most abortions, however, because they fail to address the core reasons abortion is opposed: recognition of and compassion for the children threatened by the procedure.

Pro-lifers have long argued that such celebrations of abortion are a more accurate representation of the true views of even mainstream abortion defenders, given their opposition to even modest abortion restrictions such as waiting periods or ultrasound requirements.