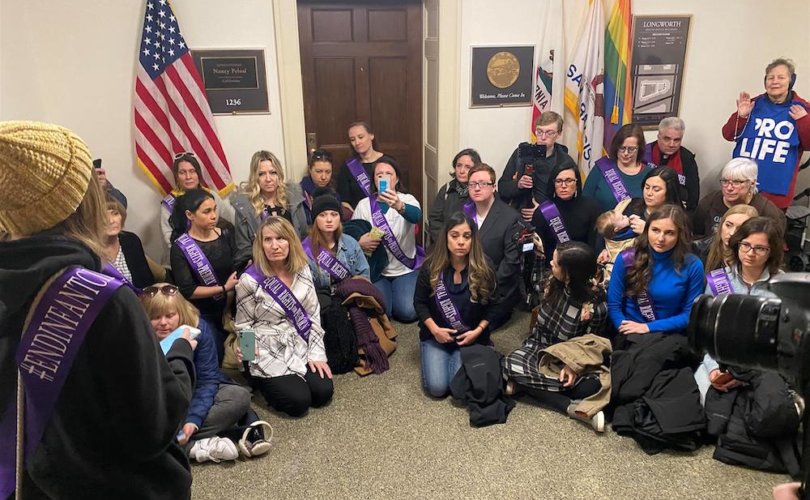 WASHINGTON, D.C., January 22, 2020 (LifeSiteNews) – Dozens of pro-life activists brought the nation’s opposition to infanticide right to House Speaker Nancy Pelosi’s doorstep Wednesday, staging a sit-in at the California Democrat’s Washington, D.C. office. A number of the peaceful demonstrators were subsequently arrested and led away by police.

The sit-in was part of a larger campaign dubbed the “Purple Sash Revolution,” an initiative of Stanton Healthcare’s new Stanton Public Policy Center. The purple sashes worn by participants symbolize solidarity with the women who fought to gain the right to vote, who wore purple sashes as well.

The group intended to call attention to Pelosi’s role in obstructing legislation that would require abortionists to transfer infants who survive abortions to hospitals, where they would be given the same degree of care as any wanted newborn. House Democrats have blocked the bill from receiving a vote more than 80 times.

LifeSiteNews was on the scene to provide live video coverage of the event, starting with the pro-lifers gathered in the reception area of Pelosi’s office. The Speaker herself was not present on Capitol Hill as she’s leading a congressional delegation to Israel, but multiple pro-life activists took the opportunity to respectfully voice their disapproval of her position.

“There are people alive today who survived abortions, and their lives have just as much dignity and value as any other human being,” one argued, asking Pelosi to “see the value in those infants who are left aside in a bucket, to look at them with the dignity that she looks at America.”

“I just want Nancy Pelosi to understand that she needs to hear all of our voices and be very open-minded on how everyone feels, how these unborn children cannot even speak and we’re here to stand up for them,” another said. “We just really need her to open up and listen to all of us.”

The group then moved to the hallway, where the crowd sang Amazing Grace and the Rev. Patrick Mahoney, director of the Christian Defense Coalition, led the group in prayer.

“We were inside Nancy Pelosi’s office, we left, a number of people knelt down in front of her office door, and then the capitol police asked us to leave,” LifeSiteNews’ Doug Mainwaring reported on the scene. “So most of us were herded out to the far end of the hallway, although some remain in front of the Speaker’s office…they’ve been threatened to be arrested by police.”

“It is unacceptable that we as a nation would ever think that it would be okay to pass legislation in states that would allow for a baby to be killed after a botched, late-term abortion,” Stanton founder and CEO Brandi Swindell told LifeSiteNews.

“These little babies are fighting to survive an attempt for their life to be taken out, and then we give abortionists another opportunity to kill that baby? It’s wrong. It is not who we are as a society. It is barbaric. And so all of us here today, we represent the millions of Americans that reject abortion or reject late-term abortion. And so today was a moment of strength, it was a moment of power, it was a moment of speaking truth to power,” she added.

The sit-in took place on the 47th anniversary of the Supreme Court’s Roe v. Wade ruling, and the same week as hundreds of thousands of pro-life activists are descending on the nation’s capital for the annual March for Life.