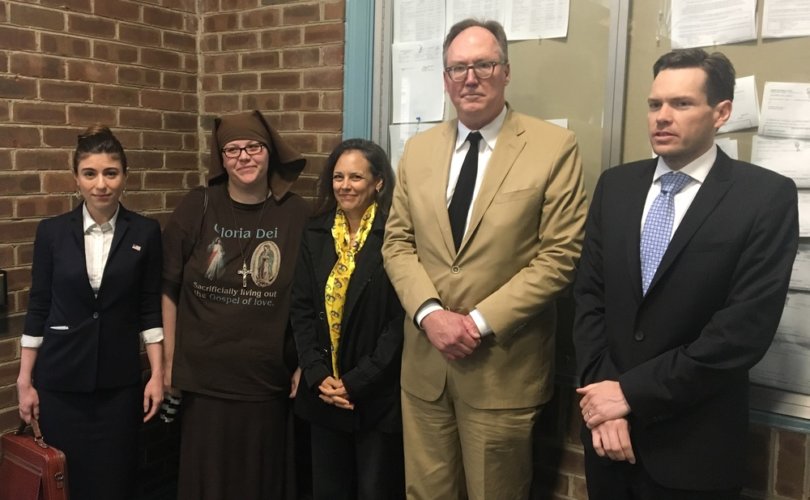 ALEXANDRIA, Virginia, May 18, 2018 (LifeSiteNews) – Today, two U.S. pro-life activists were convicted of trespassing and received suspended fines but avoided jail time for entering an abortion facility and begging the mothers inside to choose life on December 2, 2017.

Judge Donald Haddock sentenced Lauren Handy to a $1,000 fine and Linda Mueller to a $500 fine, both of which were suspended if the two pro-lifes agreed to meet various conditions, such as good behavior. Mueller will appeal, meaning the case will likely end up before a jury; Handy will not appeal.

Handy said she was glad the trial could at least give “some sense of justice” to the babies killed by abortion. She told LifeSiteNews that she was prepared to go to jail, where she would have had the opportunity to help pregnant and post-abortive women.

Haddock was not amenable to a defense of necessity, saying, “this is not the forum for challenging existing law.”

The attorney defending both pro-life women, John Kiyonaga (whose brother Paul is defending three pro-lifers in a similar Red Rose Rescue case in a D.C. court), therefore was forced to limit his cross-examination questions to topics like the layout of the abortion facility.

Handy and Mueller entered Alexandria Women’s Health Clinic, an abortion facility located inside an apartment building, and distributed red roses to the mothers inside as part of the ongoing “Red Rose Rescue” movement.

Abortion nurse Catherine Flandez testified, “they were handing out roses and plastic babies” and trying to convince women not to abort their children. The facility’s receptionist asked them to leave and when they didn’t, the abortion workers called the police.

Kiyonaga and Flandez went back and forth about how the abortion center is structured and where Flandez first saw Handy and Mueller, with Kiyonaga pressing her to use distinct words like “hallway” and “corridor” to avoid confusing the court.

The proceedings were at times tense as the prosecutor objected to many of the defense’s questions about the nature of the abortion facility and the work it does.

The judge did allow, however, attorney Marina Medvin, an additional defense lawyer for Handy, to question Flandez fairly extensively about whether the abortion center is in any way publicly funded. Medvin is a high-profile, top-ranked criminal defense attorney.

Whether an entity receives public funds or engages in political activity has bearing on laws related to trespassing. Medvin asked whether Alexandria Women’s Health Clinic has endorsed political candidates or been endorsed by candidates, if doctors from other facilities come to commit abortions there, and where the abortionist goes for his continuing education and who pays for it. She asked about the nature of the center’s advertising and whether they specifically say certain people cannot enter it.

Medvin argued that Handy and Mueller were asked to leave – something that does not typically happen when a person without an abortion appointment enters – because they were speaking to the clientele.

Haddock said that if someone entered 7/11 and told the people inside not to buy its hot dogs because they cause heart attacks, management could still ask and require that person to leave.

Abortion receptionist “Jeri” Kaes and Officer Sigoura of the Alexandria City Police also testified. The latter explained that because Handy refused to leave with the police while under arrest, medics had to be brought in to wheel her out. The prosecutor used this in her closing argument, suggesting that using an ambulance was a waste of resources.

“I’m not seeing any contrition,” the prosecutor said of Handy, citing a media interview during which Handy defended her rescue actions and said she only answers to God’s authority. In that article, Handy is identified as a “Catholic anarchist,” something the prosecutor mentioned.

“Being a Catholic anarchist, whatever that means, is not a crime,” Kiyonaga replied.

The prosecutor recommended fines of $2,500 for Handy and $1,000 for Mueller because Mueller, “too, laid down on the ground” instead of complying with the arresting officer.

In November 2017 in a similar case tried by the same prosecutor, Haddock gave more leeway to arguments about the necessity of going into the center to save babies. Six other pro-lifers conducted a Red Rose Rescue at that same facility in September 2017. Their lawyer had more latitude to use Virginia’s fetal homicide law in his arguments. Those pro-lifers were also found guilty of trespassing and received suspended fines.

Doing the Red Rose Rescue was “definitely worth it,” Handy told LifeSiteNews. Pro-life activists do the rescues so that “each child scheduled for death will have known a moment of human love during their brief time on earth,” she said.

In March 2018, a judge in Michigan sentenced five Red Rose Rescuers to one year of reporting probation, more than $1,000 in fines each, and forbade them from going within 500 feet of any abortion facility in the United States. Some of them could end up in jail if they don’t pay the fines. Such a sentencing – particularly the ban on going near any abortion center, not just the rescue site – seems to be unprecedented in modern times.