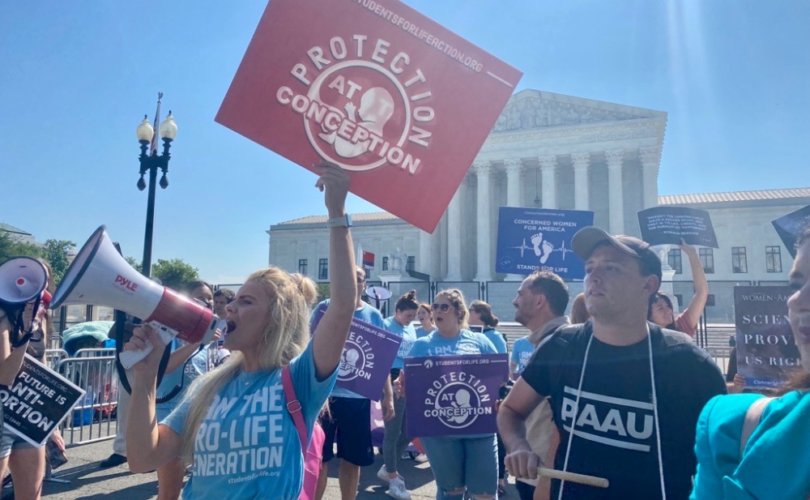 WASHINGTON D.C. (LifeSiteNews) – A large media presence is amassing outside the United States Supreme Court awaiting the release of opinions as the fate of Roe v. Wade hangs in the balance with the outcome of Dobbs v. Jackson.

LifeSiteNews is on the ground outside the U.S. Supreme Court as the nine justices are set to deliver opinions this morning, while the number of pro-abortion protestors begins to grow and tensions rise with police separating the pro-lifers from the abortion protestors.

Prominent pro-life activist Rev. Patrick Mahoney earlier told LifeSite that the scarcity of pro-abortion protestors was “what we call a nothing burger.”

“The summer of rage, the hundreds of thousands of people taking to the streets, just isn’t happening,” said Mahoney.

Extremely anemic turnout of pro-abortionists who had planned to block access to the U.S. Supreme Court this morning. Rev. Patrick Mahoney says it’s a “nothing burger” so far: pic.twitter.com/PtHVLstQhK

Pro-life activists, including from the progressive anti-abortion uprising (PAAU), faced off with a handful of pro-abortion protestors chanting pro-life slogans.

The pro-abortion group, Shut Down DC – which has a history of protesting outside the SCOTUS justices’ houses – posted a rally call online for pro-abortion protestors to join then and “ShutDownSCOTUS” in order to protest the potential over-turning of the nearly 5o-year abortion ruling.

Want to #ShutDownSCOTUS with us on Monday but don’t have an affinity group? That’s ok! Meet us at Stanton Park at 6:45am. It will be hot so make sure to bring water, sunscreen, a hat, a mask, and whatever else you need.

However, the numbers of the pro-abortion protesters remain moderately small outside the Supreme Court, in the build up to the release of an unspecified number of opinions at 10 a.m.

Um, this is the (entire) group that had planned to blockade the U.S. Supreme Court. 🤣 pic.twitter.com/aWIVAKlv93

Pro-abortion groups all over Cap Hill blocking traffic this morning ahead of SCOTUS decisions. We don’t know if Dobbs is coming today, but there sure are a lot of police out this morning. pic.twitter.com/tUAvmmiLoR

“Pro-aborts have no momentum, no energy,” he tweeted.

“This feels like a pathetic last gasp for Roe v Wade. The energy and momentum is 100% with the pro-life movement and the unborn.”

With Wednesday of this week also billed as an opinion release date, a total of 29 opinions are left to be issued before the end of this term later this month.

— Article continues below Petition —
PETITION: Call on Biden to condemn violent pro-abortion rioters across America!
Show Petition Text
21490 have signed the petition.
Let's get to 22500!
Thank you for signing this petition!
Add your signature:
Show Petition Text

It is now over a month since, on May 2, Politico published a leaked draft of a majority opinion by conservative Justice Samuel Alito for Dobbs, which concerns Mississippi’s 15-week abortion ban.

The draft states that “Roe was egregiously wrong from the start,” and therefore it is “time to heed the Constitution and return the issue of abortion to the people’s elected representatives.”

In response to the unprecedented leak, the Court announced the draft was indeed authentic but “does not represent a final decision by the court or the final position of any member on the issues in the case.”

Should it prove to be the Supreme Court’s final decision, its ramifications will be dramatic. More than 20 states currently have laws on the books that would effectively ban abortion within their borders upon Roe’s fall, from pre-Roe abortion bans that went unenforced to “trigger laws” designed not to take effect until a ruling like today’s. In those states, abortion would become illegal as soon as the ruling is issued.