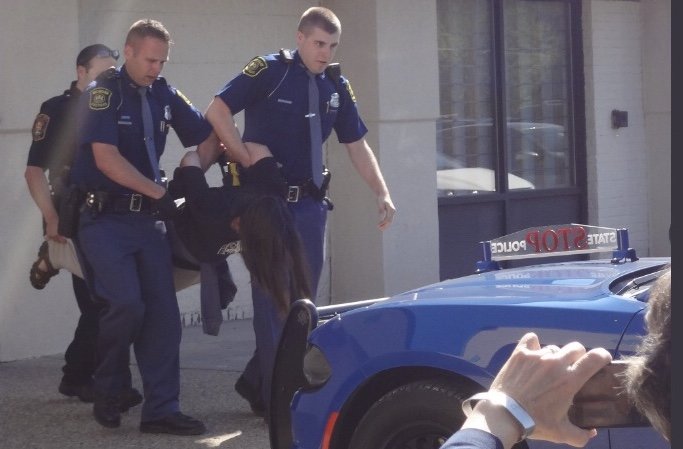 Michigan State Police arrived at the scene of a Red Rose Rescue on June 7 in Flint, Michigan, and carried peaceful pro-lifers out of the abortion center.Twitter

FLINT, Michigan, July 3, 2019 (LifeSiteNews) — Four pro-life activists in Michigan will have to wait until August to find out whether they will be charged with a felony for peacefully resisting arrest while trying to convince moms inside an abortion clinic to not end the lives of their unborn children.

On the morning of June 7, Lauren Handy, Matthew Connolly, Will Goodman, and Patrice Woodworth entered the Women’s Health Center of Flint. They proceeded to pray for, counsel, and give roses to several women in the waiting room. Clinic staffers yelled at and shoved the nonviolent activists before a dozen law enforcement officers arrived on the scene and carried them out of the facility.

For performing the Red Rose Rescue, which was organized by Dr. Monica Miller of Citizens for a Pro-life Society, the four were charged with two misdemeanors — disturbing the peace and trespassing — as well as a felony for assaulting, obstructing, and resisting an officer, a crime that could carry up to two years in prison according to Michigan state law.

All four were taken to jail after their arrests, with Handy and Woodworth posting bail. Goodman and Connelly remained incarcerated until yesterday, when, thanks to the persuasive efforts of their attorney, Robert Muise, from the American Freedom Law Center, they were released without bail on personal recognizance by Michigan District Court Judge Vikki Bayeh-Haley.

The preliminary hearing for the felony charges was originally set for Tuesday, July 2 at 11 a.m. at the 67th District Court of Genesee County, 630 S. Saginaw Street in Flint. The hearing was scheduled for one hour, with Bayeh-Haley overseeing the proceedings.

Muise and the state prosecutor agreed that more time was needed and convinced Bayeh-Haley to move the hearings to August 26 at 9:30 a.m. so multiple witnesses could take the stand. It is likely that at least one abortion center staffer as well as several police officers will testify and be cross examined. Security footage taken from the abortion center that recorded the rescue attempt will also be shown in the courtroom.

Michigan law requires the state to meet a “probable cause” threshold for a felony charge to be established. If Bayeh-Haley decides that threshold has been met, the felony case will be moved to the circuit court and placed before another judge. Muise told LifeSiteNews that if that happens, he will seek to dismiss the charges. If she doesn’t believe “probable cause” has been met, the charges will be dropped and the legal team for the four rescuers will focus their efforts on the misdemeanor charges of disturbing the peace and trespassing, charges that could result in a fine and possible jail time.