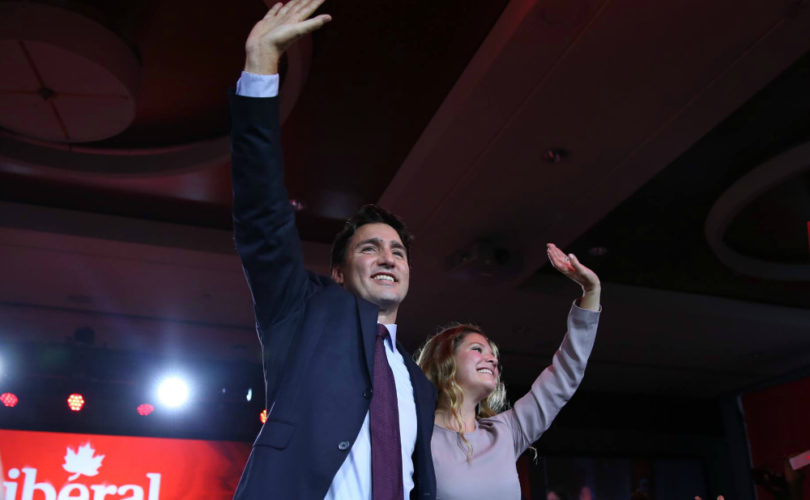 TORONTO, October 20, 2015 (LifeSiteNews) – The election of a majority Liberal government under leader Justin Trudeau on Monday night – although not surprising – is a serious blow for pro-life and pro-family advocates, say representatives of Canada’s political lobby group, Campaign Life Coalition.

The oldest son of the late Pierre Elliott Trudeau – whose Liberal government legalized abortion in 1969 – Justin Trudeau has followed his father’s anti-life lead in his political career, most notably when in May 2014 he banned anyone with pro-life convictions from running as a candidate for the Liberal Party.

Indeed, Trudeau’s rigid and non-negotiable devotion to a “woman’s right to choose” has been decried by the pro-life “No2Trudeau” campaign as abortion extremism.

“Canadians across this country sent a message tonight,” a hoarse-voiced Trudeau, MP for Papineau since 2008, said in his victory speech. Canadians, he added, “chose change, real change.”

But what that change might be has CLC president Jim Hughes and other pro-life advocates deeply concerned. He fears that Trudeau’s Liberal majority government will “push for more abortion access in Canada and around the world.”

He also expressed concern that a Liberal government will refuse to invoke the notwithstanding clause to put a five-year freeze on the Supreme Court February 2015 decision legalizing physician-assisted suicide.

That ruling gave Parliament a year to craft a law regulating the practice, but pro-life critics, including Canada’s bishops, say that is not enough time.

“CLC urges the Liberal caucus to refrain from passing a permissive euthanasia and assisted-suicide law that will surely put the lives of many vulnerable Canadians at risk,” said Hughes.

“I also call on Trudeau to represent all Canadians and allow his MPs to vote their conscience on moral issues, issues that many of their constituents feel very strongly about.”

CLC’s national organizer Mary Ellen Douglas said that while “we are saddened that some pro-life candidates were defeated, the pro-life movement should be encouraged by the fact that a strong pro-life presence in the House of Commons will remain.”

She added: “We will continue to work with them to ensure that this government is held accountable for the legislative decisions it makes.”

The Liberals’ Monday night victory was swift and decisive, and, according to pundits, an unprecedented comeback for a political party that won only 34 seats and 19 percent of the popular vote in the 2011 election.

Scarcely fifteen minutes after the polls closed in Ontario, Quebec, Nunavut, the Northwest Territories, Manitoba, Saskatchewan and Alberta at 9:30 p.m. EST, the networks declared the 43-year-old Trudeau the 23rd prime minister of Canada.

The final results have the Liberals with 184 seats, the Conservatives, 99; the NDP, 44; Bloc Quebeçois, 10; and the Greens with 1, leader Elizabeth May.

Defeated Conservative Prime Minister Stephen Harper was re-elected in Calgary Heritage and will continue as MP, but is stepping down as leader.

Party president John Walsh stated that the Conservative caucus will appoint an interim leader and begin organizing a leadership race. Details will be announced Tuesday.