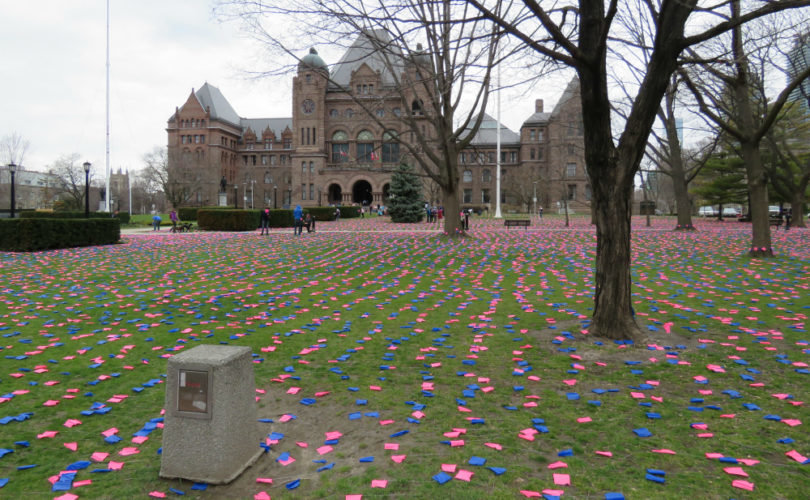 Pro-life activists placed 100,000 flags on the lawn in front of Queen's Park in Toronto on April 22 to symbolize the number of lives taken by abortion in Canada every year.Lianne Laurence / LifeSiteNews

TORONTO, April 23, 2015 (LifeSiteNews.com) — Pro-life blogger Patricia Maloney and the Association for Reformed Political Action (ARPA) filed a court action against the Ontario government on April 22, claiming that the Liberal government’s decision to withhold information on abortion from the public violates their Charter rights of freedom of expression and freedom of the press.

A January 2012 amendment to the Freedom of Information and Protection of Privacy Act (FIPPA) excludes abortion information from freedom of information (FOI) requests, a fact Maloney discovered when her March 2012 FOI request for abortion statistics was denied.

Maloney, who blogs at Run With Life, and ARPA, an Ottawa-based Christian Reformed political action group, have asked Ontario’s Superior Court of Justice to strike down the amendment as unconstitutional.

According to ARPA legal counsel André Schutten, the court could rule in as early as six months.

For the government to hide abortion information, Maloney stated during Thursday’s press conference at Queen’s Park, is “anti-democratic…unethical” and “just plain wrong.”

The Ottawa-based Maloney started blogging on sanctity of life matters on March 31, 2010, and since then, made several disturbing discoveries with information she obtained under FIPPA.

Notably, Maloney found that the Canadian Institute of Health Information significantly under-reports the number of abortions in Ontario. In 2010, “there were over 44,000 abortions performed in Ontario,” she stated, almost 45 percent more than CIHI reported.

“Anything and everything about abortion is now being hidden by the Ontario government,” she stated, emphasizing the sweeping nature of the exemption. “Abortion numbers. Abortion complications. Abortion costs to the taxpayer. The demographic statistics of women who have abortions: their age, how many abortions they have, and the gestational age of the fetus at termination.” None of this can be released to the public under the amended FIPPA.

The government’s refusal to disclose information on this “controversial, tax-payer funded medical procedure,” she added, “hinders the public’s ability to hold the government to account and sets a dangerous precedent.”

Maloney also asserted that the FIPPA amendment, which the Liberals brought in under Bill 122 (The Broader Public Sector Accountability Act) was “snuck into law” in secret. “There is no recorded debate in Hansard of the change to FIPPA. No debate in the Ontario legislature; no discussion in committee hearings.”

Moreover, Maloney stated, “I tried repeatedly to get Kathleen Wynne or her health minister, or my local MPP to tell me why they did this. They were unable, or unwilling, to give me a reason.”

When her FOI request was denied in March 2012, Maloney and lawyer Albertos Polizogopoulos took the matter to court. Two-and-a-half years and $30,000 in legal fees to Maloney later, the Ministry of Health gave her the requested abortion-related information — then argued her case was moot.

But as Schutten told LifeSiteNews, “The bad law is still on the books.”

ARPA joined Maloney in the April 22 charter challenge to FIPPA because “without access to government information, a citizen cannot meaningfully discuss, debate, scrutinize or make informed opinions on matters of public policy,” Schutten stated at the press conference. “Freedom of information is protected by the Charter’s freedom of expression guarantee.”

Schutten noted that the case is about “transparency” and “democracy” but most importantly “about justice. Justice requires accountability. It is a scientific fact that each abortion takes the life of a human being…. The way to deal with this is not to censor all abortion-related information.”

The case has implications beyond Ontario, Schutten said, pointing out that BC’s privacy legislation has a “similar censorship provision.”

Earlier that morning, about 160 volunteers marked the launch of the charter challenge by laying 100,000 pink and blue flags on the south-east lawn of Ontario’s legislature, a task that took them about an hour, to illustrate the number of pre-born children killed each year by abortion in Canada.

According to ARPA spokesperson Niki Penning, the flag display was sponsored by ARPA initiative We Need a Law. The legislature’s rules however, stipulated the grounds could not be “pierced,” and ARPA’s request for an exemption was refused.

So the volunteers, who came from Ottawa, Hamilton, Oxford, Niagara, and Toronto, laid the flags on the ground, which Penning said seemed a fitting way to symbolize human lives ended abruptly and violently before birth.