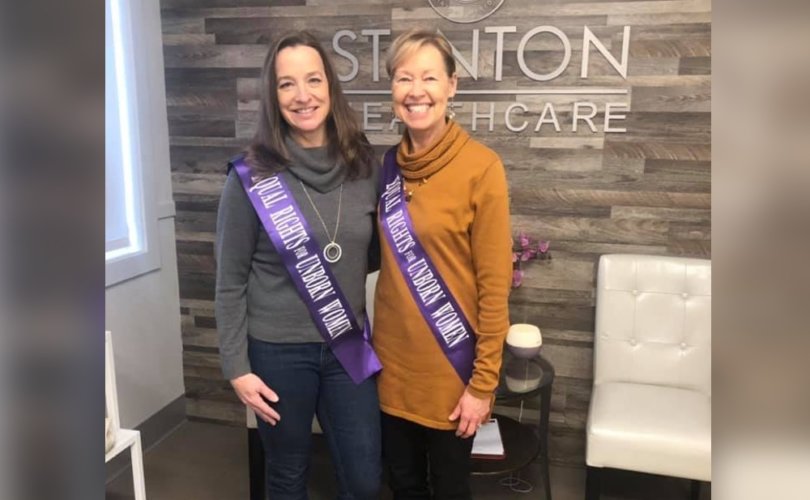 WASHINGTON, D.C., January 20, 2020 (LifeSiteNews) – Pro-life activists are holding a sit-in at Rep. Nancy Pelosi’s office on Wednesday, the anniversary of Roe v. Wade, demanding she allow the U.S. House to vote on banning the infanticide of newborns who survive failed abortions.

The sit-in, during which some pro-lifers will peacefully risk arrest, is part of a larger campaign called the “Purple Sash Revolution.” It’s the inaugural initiative of the new Stanton Public Policy Center, a branch of Stanton Healthcare, a group of life-affirming women’s health centers in America and abroad. The purple sashes that participants will wear are to express solidarity with the early Suffragists, who wore purple sashes demanding women have the right to vote.

The bill Pelosi has prevented the U.S. House from voting on is the Born-Alive Abortion Survivors Protection Act, which would require doctors to give basic medical care to newborns who are born as a result of a failed abortion. Infanticide after failed abortions came into the limelight last year, when Virginia’s governor said in some cases an infant “would be kept comfortable” while a discussion ensued about his fate.

“It is unconscionable that Speaker Pelosi is blocking Congress from voting on this critical human rights issue,” said Brandi Swindell, founder and CEO of Stanton.

The Stanton Public Policy Center will be a voice for the many women who aren’t represented by the Planned Parenthood Action Fund, according to Swindell. The group will focus on advancing legislation that “empowers and inspires women” and “upholds the dignity of every human life in the womb.”

Just as Planned Parenthood advocates for abortion abroad, the Stanton Public Policy Center will have an international presence, too, but it will be fighting female genital mutilation and helping refugee women.

“Why would we ever as a nation want to export abortion? We should be exporting hope,” said Swindell.

Swindell, who is currently based in Idaho, expects 2020 will be a blockbuster year for her organization. She plans to spend much more time in Washington, D.C. now that Stanton’s public policy arm has launched.

Longtime pro-life activist and Stanton chief strategic officer Rev. Patrick Mahoney – with whom Swindell was arrested in China protesting human rights abuses in 2008 – will participate in Wednesday’s event, as will pro-life students.

“It should be common sense and completely bipartisan to support any bill banning infanticide,” commented Stephanie Stone, Capital Area regional coordinator for Students for Life of America. “Democrats have become so extreme that they are even stalling a vote that protects innocent babies born alive during an abortion.”

“As a woman, I am only standing here, with a vote and a voice, because of  hundreds  (of) brave women before me who fought for my right to be heard. A hundred years ago this year,” the right of women to vote “was won, and I am eternally grateful for the founding feminists, who before I was even born, fought for my right to be considered a person in our society,” said Erica Caporaletti, president of Towson University Tigers for Life. Caporaletti will speak at the event.

“However, we stand here today because this right to be considered a person … the right to a  voice is not yet secured for every member of our human family,” she continued. “And we know that until that right is won for everyone … none of us are  actually fully  free.”

Wednesday’s “Purple Sash Revolution” event is the first of many that Stanton will be holding this year, Swindell told LifeSiteNews. Pro-lifers will be able to obtain purple sashes from Stanton representatives at March for Life events, and they will be sold online starting next month.

Full list of events surrounding the 2020 March for Life