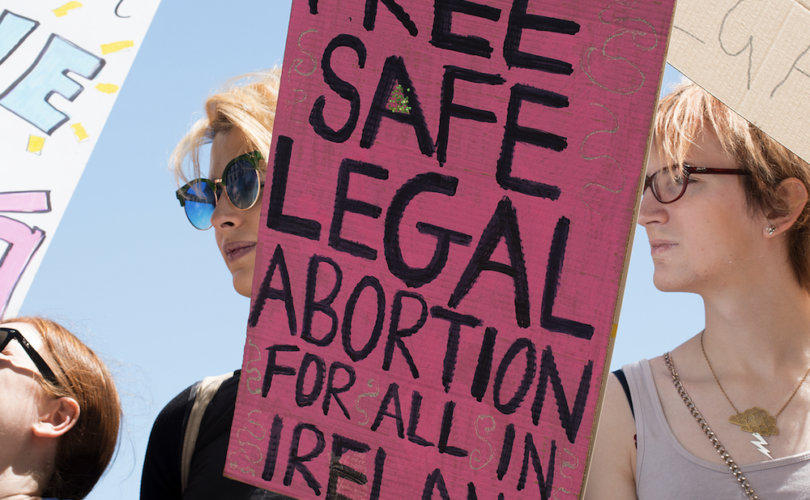 September 20, 2018 (Society for the Protection of Unborn Children) – Ireland's constitutional protection of the unborn came to an end yesterday as the Eighth Amendment, which enshrined the right to life of the unborn, was formally removed.

President Michael D Higgins last night signed the Thirty-Sixth Amendment Of the Constitution Bill 2018, which enacts the result of May's referendum in which just under 67% of the electorate voted to repeal the Eighth Amendment. The article in question, “the State acknowledges the right to life of the unborn and, with due regard to the equal right to life of the mother, guarantees in its laws to respect, and, as far as practicable, by its laws to defend and vindicate that right” has now been removed, and replaced with “provision may be made by law for the regulation of termination of pregnancy”.

Now Ireland's preborn girls & boys can be lawfully killed. Ireland's constitution no longer protects their lives. Higgins signed it into law, a majority voted for it in knowledge of what will now ensue. One day, history will see this for the abominable human rights abuse it is. https://t.co/7SUlrosG5I

Taoiseach Leo Varadkar told the Dáil on Tuesday that legislation would be introduced in the first week of October, with services available from January. However, doctors have expressed concerns about several aspects of the proposed legislation.

The Institute of Obstetrics and Gynaecology,  giving evidence before a Government committee, expressed concern about the need to have access to ultrasound facilities to date the pregnancy and to detect ectopic pregnancies. “Introduction of a termination of pregnancy service without adequate scanning facilities is fraught with risk” says the body's opening statement.

The Irish College of General Practitioners (ICGP) said that doctors “are concerned about the potential lack of appropriate specialist support, and the possibility of medical complications for their patients.”

Freedom of conscience in danger

They also reiterated calls for a system where doctors would “opt-in” and choose to perform abortions. The Government has advocated a system where doctors could chose to conscientiously object and opt-out, but would have to refer to a colleague who would provide the abortion. Another doctors union, the National Association of GPs, previously called on the Health Minister to ensure an opt-in system, and advocates for “conscientious objection, without obligation to refer”.

Pro-life commentators described the removal of the Eighth Amendment as “a sad day for human rights”. The evidence is that it is also a sad and frightening day for women's health and for freedom of conscience.